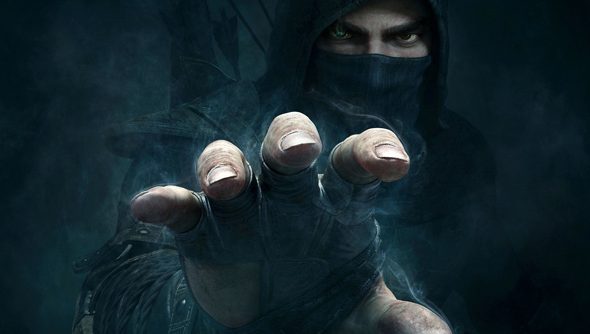 Thief 4’s been skulking in the shadows of development for years. Eidos Montreal began work on it before their other major reboot, Deus Ex: Human Revolution. This year has seen the developer push their next-generation Garrett into the spotlight and show how they hope to reinvent the title that defined stealth gaming. With two rounds of previews and a showing at E3, it’s about time we told you everything we know. 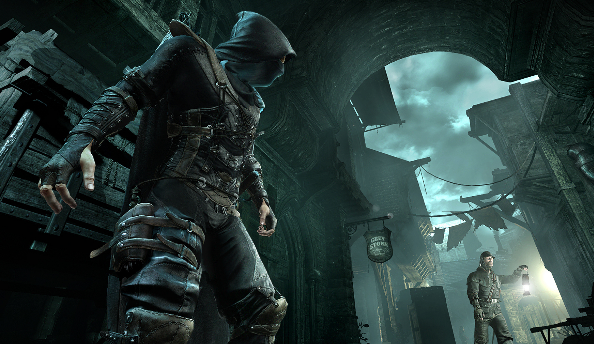 You are a Thief

Thief is, as ever, a first-person stealth game. You play Garrett, a master thief trained by an ancient sect to live in the shadows and lift loot from the wealthy inhabitants of The City. The world is in the midst of a gothic industrial revolution. Bows and swords are commonplace weaponry but you have access to more advanced kit like a hookshot and mechanical eye.

Missions are strung together by a story of betrayal and political intrigue but really you are given a location to rob of everything that isn’t stuck to the walls. Just don’t get caught while doing it.

Your tools are simple: a light gem to gauge how visible you are, a blackjack, and a bow and arrow. There are special arrows; unchanged in purpose from the previous game, but renamed to fit the lore. Water arrows, used to snuff out torches and create shadow, are now dry ice arrows.

And, of course, the lockpick returns, activating a mini-game where you must try and push up all the lock pins without snapping the pick.

Levels will still be littered with secret passages. NPCs will still complain about the cold, their home-life, and how they can’t put anything down without some kid nicking it. Garrett will still steal anything that’s not nailed down – holding it up for us to see before stuffing it into his Mary Poppins-like bag. 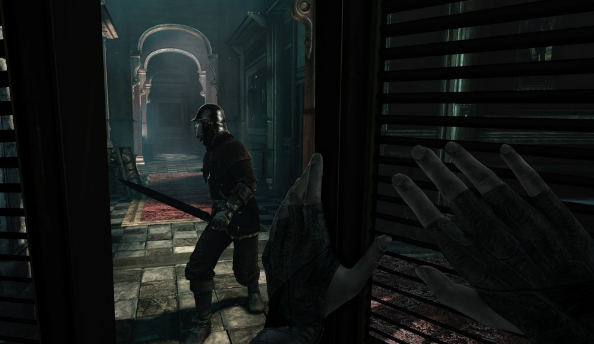 Developers often tote around tech speak like dynamic shadows and volumetric fog but it often doesn’t have ramifications on how you play the game. It just makes it look impressive. In Thief they change how you can explore the world.

Guards carrying lanterns will light up the world ahead of them, revealing your dark hiding spots. They also create new shadows for you to exploit: the guard holds the lantern in front, blocking the light which shines back his way, making shadow behind him for you follow in.

Fire, too, can be used to your advantage: leaking barrels can create ground soaked in oil, light the oil with a burst arrow and you can use the billowing black smoke to cover your movement.

Eidos Montreal want to make you inspect your environment in a way previous Thief games were unable.

Eidos showed ten minutes of this new style Thief at E3. The action starts at about four minutes in:

Eidos Montreal have proven capable of staying true to beloved franchises without stumbling into making a simple rehash. Deus Ex: Human Revolution was one of the best games of recent years. Their take on Thief could be the same. It has much of what made the original games special. They’re even making an ‘Old School Mode’ which removes the focus ability and UI helpers. 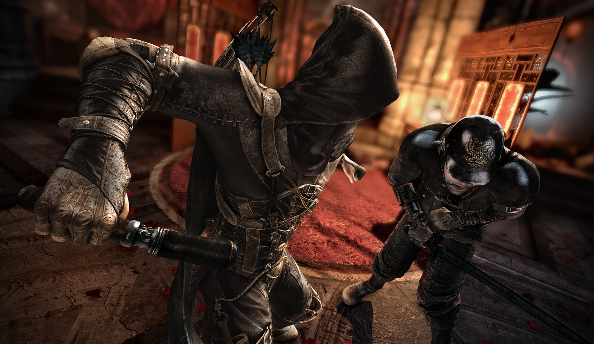 Stealth is rewarded but violence is possible

Thief’s never been about killing your way through a level. It was rarely even possible: starting a fight with the guards was a quick way to being sent from the castle in a fleet of hearses (or more likely thrown over the wall into the open sewer). Eidos aren’t making a violent approach to a level a necessity but they won’t be punishing players who indulge in a little after dark stabbing.

You can see how in this video the player gets bonus XP for headshotting a guard with their bow:

While those bonuses do encourage a spot of the ultra violence, you will also receive massive XP rewards for ghosting a level.

Eidos Montreal want lethal, non-lethal, and running away to all be options while playing. Discovery in previous Thief games often meant a restart: beefing up the combat system may encourage us to stick with our mistakes and try to continue with the job.

The punishment for doing a bad murder will be an elevated alert level for the guards. Something which won’t disappear over time. Guards can calm down but they won’t forget you’re on the loose.

You’ll also see the influence of Deus Ex: Human Revolution in Thief’s new combat system. Well-timed attacks can result in a third-person takedown. These can be for silent non-lethal neutralisations as much as they can be for loud violent kills. 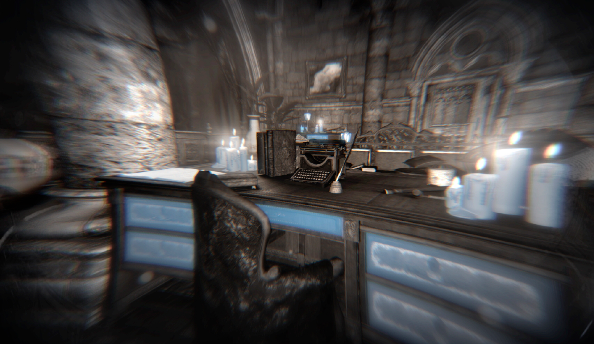 You’re equipped with a mechanical eye powered by poppies

Garrett’s mechanical eye’s picked up some new tricks since Deadly Shadows. There it could only zoom in and look under doors. Now it highlights loot, lets you trace guards’ footsteps through walls, see hidden passages, spot things of interest like a frayed rope holding a heavy weight.

You can’t use it constantly as it runs down your focus. And you’ll be wanting to save that as much as you can.

Focus allows Garrett to string together actions: usually he can pickpocket a mark one pocket at a time, each time you need to stay close and let a little countdown hit zero to lighten their wallet. With focus you can rob your target of all their gear in one fell swoop.

You can chain attacks together using focus. Garrett can fight multiple guards at once if you activate focus and highlight the different vulnerable bits you want him to strike.

Poppies are the only thing that restores focus in the field. If you’re going to rely on it you’ll need to search gardens and flower pots mid heist to track down the flower. As an aside, considering it’s the base ingredient in opium and heroin, two drugs not known for increasing awareness, poppies may not have been the best reagent choice for increasing focus. 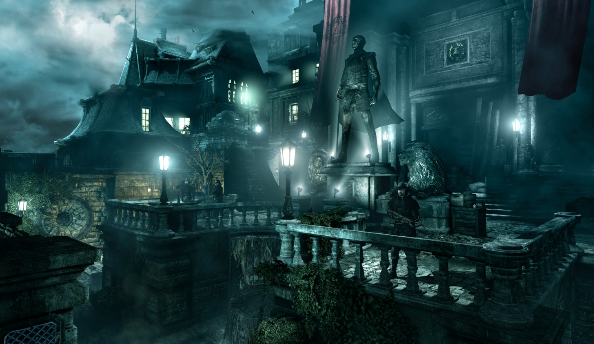 You can explore Garrett’s city

Thief isn’t an open world game but Eidos are creating a dense city hub for you to explore between missions. It houses Garrett’s hideout, the shop where he can replenish gear and upgrade his tools, and a whole host of homes and cubbyholes to be explored and ransacked.

Loot stolen on missions can be hocked to a fence or, if it’s very nice, displayed in your hideout. In his preview, Steve was shown a Faberge-like egg which looked great placed on Garrett’s mantel.

The city’s changed a fair bit from the previous games. Whereas before the city was quasi Medieval, in this Thief it’s undergoing an industrial revolution. There are still signs of the old world: old cracked sigils marked on the walls or statues overgrown with moss and creepers. This isn’t the world we’re familiar with. 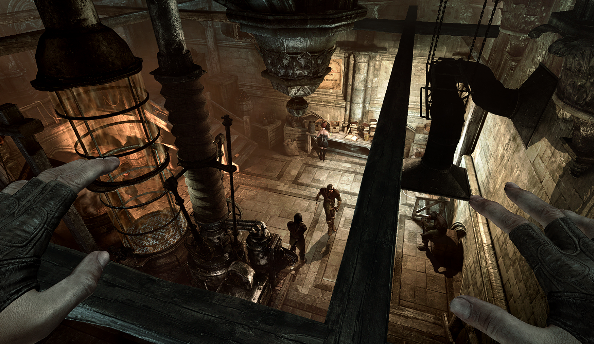 In the preview version of Thief, we were shown Garrett trying to reach a brothel before the gates were locked for the night. With minutes left on the clock he’s able to sprint through the roof space of a collapsed building next door and break into the pleasure house, leaving seconds to spare. The sequence plays out in third-person and appears to be pretty rigidly on-rails. Eidos Montreal told PC Gamer they want to “add some small events to break up the pacing and add variety”, but “in the grand scope of the game they’re a very small portion, so you don’t have to be worried about it.”

Before you go shooting off a death threat: apparently they’re also optional. Had Garrett missed closing time, the player can find other ways into the brothel. Sneakier ways.

Eidos are keen to point out that all their levels are shot through with secret passages. Going back and replaying levels will reveal whole new ways to address a heist. 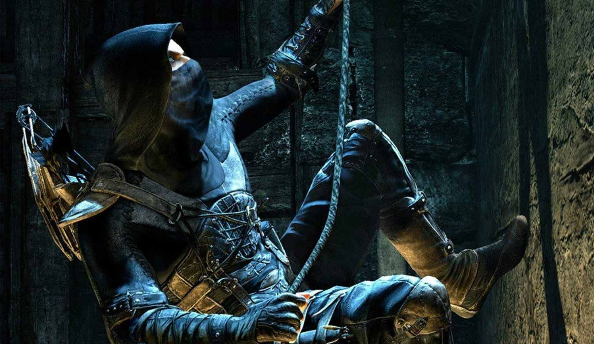 There is a new Garrett

Eidos are attempting to make this Thief a fresh start for the series. First, there’s no 4 on the title. And, most controversially, they’ve also replaced Stephen Russell, the voice actor who’s played Garrett from the beginning. It’s a carefully judged and reasoned change: the actor who will play Garrett will be asked to do both voice acting and performance capture: he will be both seen and heard.

And that’s the new Thief. A modern game, but carefully linked to the series past. Square Enix’s reboot of Deus Ex, Human Revolution, was spectacular. There’s every reason to suspect Thief will be the same.