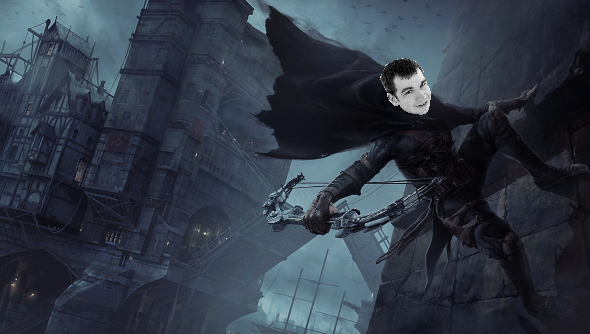 Tonight at midnight GMT, Thief steps out of the shadows. Nick’s going to be streaming his playthrough on our Twitch channel straight away, but with a masochistic twist: he’s going to play at the hardest custom difficulty possible, including perma-death. He’s also rather mad. Having never played the game before – not even a quick hands-on – he’s going in blind. If you would like to see him fail miserably conquer this challenge, read on.

The stream will start around midnight tonight, with small delay inevitable as the game applies any preliminary patches. Once up and running, Nick’s decided not to have his chat window open in fear of any spoilers or too much help for any challenges that lie ahead.

If Nick fails an objective, or even takes any damage, it’s game over. Since Nick hasn’t played the game before, expect a slow and calculated playstyle to minimise blunders.

To make things fun for you guys, there will be a multitude of giveaways throughout the stream. A copy of Battlefield 3, Trine, Bastion and Mirror’s Edge to name a few.

See you there taffer!