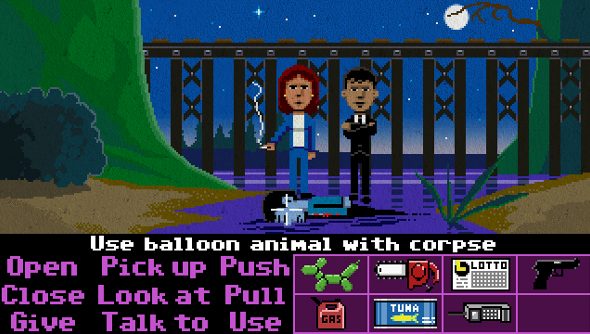 Genre godfather and all round point ‘n’ click messiah Ron Gilbert has been chatting with GamesRadar about his recently Kickstarted new project, titled Thimbleweed Park.

The 80s-styled adventure game, created by Gilbert and Gary Winnick, looks like it’s been torn straight from the history books, with verb actions and pixels and using things on things until interesting stuff happens.

In the interview, Gilbert appraises the current state of adventure gaming, saying that puzzles have suffered as modern titles focus more on story and less on challenge.

“Classic adventure games were really about the puzzles. We want to get back to that,” Gilbert told GamesRadar. “Puzzles drive everything and it seems that modern adventure games tend to get too lost in story, and puzzles are just something tacked onto that. Also verbs. I loved the verb interface and I do think something was lost when adventure games got rid of them.”

He goes on to discuss how integral challenge is to making a game that looks and feels like a classic point ‘n’ click adventure, and how the trend of creating easier and more straightforward adventure games is at odds with his vision for Thimbleweed Park. The retro adventure will feature two difficulty settings, one that caters to a modern audience and another that will be distinctly more challenging.

Gilbert’s adherence to the genre’s unforgiving roots is anything but a nose-thumbing at modern convention however, rather his work on Thimbleweed Park is an effort to recreate something that could very well have existed in 1987, warts and all. “I don’t know if I can quantify what the charm of those games is,” says Gilbert, “but we’re going to design it like we would have back in 1987 and we’ll see.”

You can read the full interview over at GamesRadar.