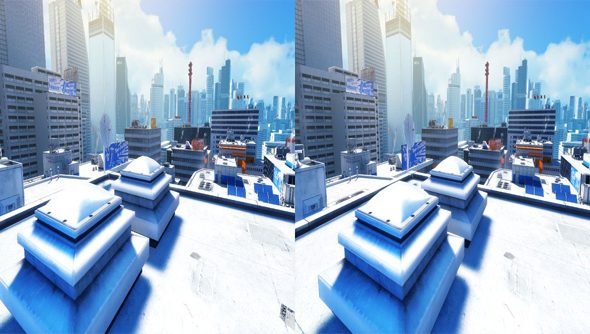 Meant To Be Seen is a community devoted to stereoscopic 3D gaming, and from that community of die-hard advocates comes the clunkily titled Vireio Perception, an in-development set of virtual reality 3D drivers designed specifically for the upcoming Oculus Rift headset.

What that collection of words means is that, without any effort required from respective developers, support for the Oculus Rift is being gradually added to existing games. Games like Left 4 Dead, Portal 2, Skyrim and Mirror’s Edge. Mirror’s Edge! Mirror’s Edge.

What makes these drivers unique is their ability to “pre-warp the image to match the Oculus Rift optics, handle custom aspect-ratios (needed for the Rift’s strange 8:10 screen), and utilize full [three degrees of freedom]head-tracking”.

It seemssimilar to how Nvidia’s 3D Vision drivers jerry-rigged stereoscopic 3D support into old PC titles, with varying degrees of success. As work on the driverscontinue, and as more titles are added, this could open up the possibility of Oculus Rift support for anything as far back as, erm, let’s say Jet Set Willy.

The Oculus Rift itself was recently delayed by three months, with dev kits nowexpected to land in the laps of Kickstarter backers around mid-March.