“I was trying to make an Oh Brother Where Art Thou game, failed, and made Thomas Was Alone instead,” says Mike Bithell.

Oh Brother Where Art Thou, for those unaware, is a Coen Brothers comedy from the year 2000 starring George Clooney, John Turturro and Tim Blake Nelson. After escaping from prison, this maladroit trio go off in search of main character Everett’s (played by Clooney) hidden treasure, but wind up sidetracked and instead form a bluegrass folk group named The Soggy Bottom Boys. It’s as fun and bizarre and offbeat as it sounds, yet hardly orthodox videogame inspiration. As Bithell says, though, somewhere in the midst of this seemingly incongruous mix of ideas, Thomas Was Alone was born.

“Me and my mate Daz used to have this tradition where we’d meet up once a week, sit on the sofa at one of our places and watch movies,” explains Bithell. “My movie one night was Oh Brother Where Art Thou – I loved it and I wanted to introduce it to him. We got to chatting while watching it and specifically there’s a bit where the characters are in a chain gang where they’re all tied together.

“We were like: there should be a videogame where you’ve got two buddies and they’re tied together by a rope and you can swing one around, there’s obstacles you can’t get through – we thought it was a really interesting puzzle mechanic. Back then, we were both working on puzzle-platformers and we were both in that kind of mindset. After that, I just started making a prototype.” 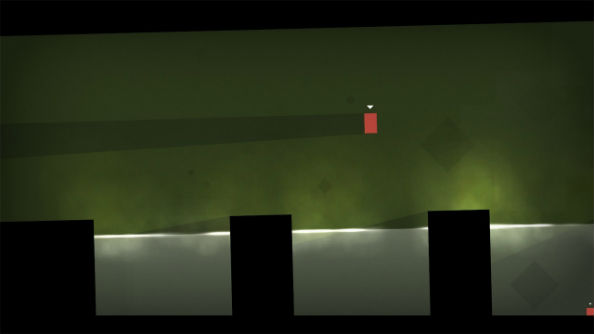 Bithell set about crafting two simple characters with the aim of eventually tying them together as planned – the overarching idea being that this would make one reliant on the other and vice versa. When it came to adding the tether, though, Bithell realised that if he instead made one of the characters jump higher than the other, he could better convey the concept of dependence he was reaching for. The latter method, he felt, had more potential, and thus became the foundation upon which the rest of the game was built.

Whereas it’s hard to imagine Thomas Was Alone any other way than how it appears today, this wasn’t the only major decision that influenced its final guise. In fact, in the earliest days of his career, Bithell had his heart set on an animation-oriented path, and not games design at all.

As a child he wasn’t allowed a console, thus cut his teeth on friends’ machines while jointly dedicating much of his impressionable years to Apogee Software classics Commander Keen, World Rescue and Hocus Pocus. Further down the line he picked up a Dreamcast – “I was a big Shemnue fan, not as big as some Shemnue fans, but a respectable amount of a Shemnue fan” – and later fell in love with Metal Gear Solid, albeit the belated PC port.

Bithell’s passion for animation was ultimately misguided as it stemmed from a blind desire to work in the videogames industry in any shape, form or capacity. Animation, he reckoned, was his way in. “I didn’t really understand how computer games were made and I think that’s something that people understand a lot better now,” he admits. “I figured that animation was something I’d seen people do and I thought: that’s a human job in games. Back then, [design] was just this weird thing to me and I just assumed computers made games. This seems really naive nowadays, but I was a dumb kid!” 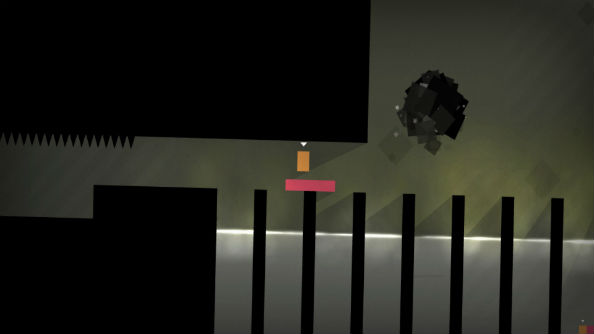 A conversation at a university open day channelled Bithell’s passion accordingly, and after graduating with a degree in game design he joined the now-defunct Blitz Games Studios. A two-year stint at Bossa Studios – who were a social games company at the time – followed, however his spare time was occupied by then flash game and pet project Thomas Was Alone. By 2011, the Thomas prototype that Bithell had thrown together in just 24 hours had accrued distinct levels of interest from players and press alike, yet pragmatism ruled any thoughts Bithell might’ve had about going solo.

“I didn’t quit my job until I had a year’s salary in the bank,” says Bithell rather sheepishly. “I was kind of a chicken about it, I didn’t rush off and think, ‘I’m going to make my game’ and see how it went. It was very much, ‘Ok, let’s make something, and if it works then I’ll leave.’ And it did, so I did.”

Upon release in 2012, Thomas Was Alone was met with praise across the board, directed not least at its surprisingly deep and endearing characters, level structure, and engaging narrative. This was the first script Bithell had ever written, thus commendations on the latter marked a personal achievement, besides the obvious accomplishment of developing and releasing a game on his lonesome. Furthermore, Danny Wallace’s show-stealing narration brought Bithell’s words to life – a performance he’d later be acknowledged for with a BAFTA Games Performer Award. 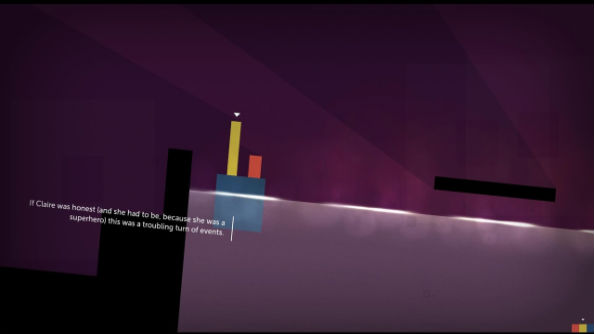 “I got drunk and emailed him,” says Bithell of how he secured Wallace’s services, having never worked with him before. “And he was also drunk. Well, that’s his version. I dunno, the problem with Danny is that he’s an amazing storyteller. You never know if you’re hearing a really great fictionalised version of events or the truth. His version of events is that I got drunk and emailed him – I know that’s true – and he claims that he was also drunk when he received the emailed and therefore said yes because he was drunk.

“Basically, I’d been writing the game and his voice crept in – because I was a big fan of his books – and I was like: I really need someone who sounds like Danny Wallace to read this, and kept trying different people and then none of them could do him. I got drunk, found his email on some weird celebrity stalker website, and emailed him. I don’t know how that worked because it’s the least professional way to approach someone, but he was up for it.”

Given just how good Wallace’s performance was, it’s perhaps hard to believe Thomas Was Alone was originally slated to be a text-only game. Prior to the drunken email exchange – not to mention the lineup of Wallace wannabes – Bithell had experimented with motion typography, yet found himself too often forced to either make levels smaller to accommodate text, or make the text shorter and thus less impactful. In the end, adding a voiceover became the most simple and straightforward option – and one the game ended up benefitting from considerably. 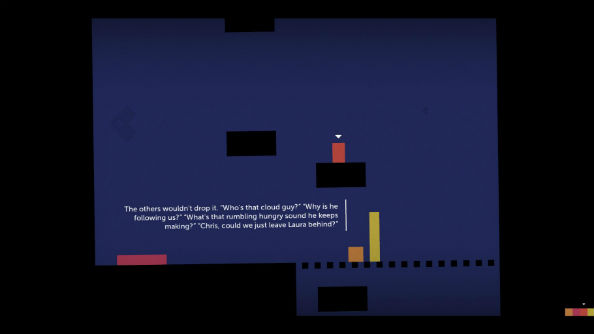 By the time Bithell did get Wallace on board, the TWA was almost finished. In order to get into part, Wallace would play each stage before recording, get into the mindset of Thomas and his friends, and listen to the soundtrack simultaneously so as to sense where his voice would fit against everything else going on in a given level. Bithell praises Wallace for his “absolute professionalism” and recalls his fondness for adlibbing – some lines of which made it into the game’s final version.

Although grounded and humble even to this day – “I think I’d have been an arsehole if I’d ever assumed it’d be as popular as it went on to be” – Bithell recalls one moment in particular that made him realise his debut venture could lead to success. “I started noticing people getting really into when we took it to events,” he says. “I noticed that emotional reaction. I had a guy come out during an event – it was the first time I’d exhibited the game at a big event – and I hadn’t brought a demo with me, it was just the full game itself. He played the entire game. You can probably rush through Thomas in about three, maybe four hours and he just sat there and by the end he had a crowd of about 30 people watching him as he worked his way through the game.

“At that moment I was like, ‘This dude just paid quite a lot of money to sit in this room, and he’s using that time to play this. Call of Duty’s over there.’ [So] I realised there might be something to it. Something was working. But again, you never know with these things – you never know whether something’s going to catch people’s attention or play out. You always hope it will, but you never know.” 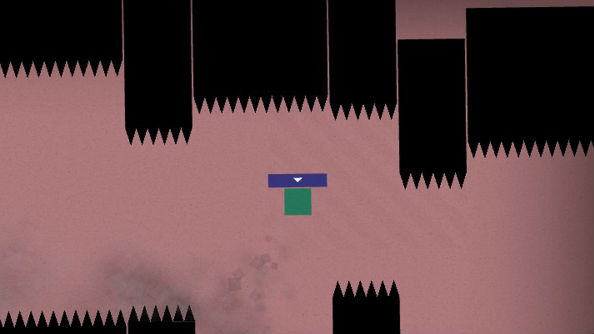 Riding the waves of what could be considered an indie renaissance – for want of a less hackneyed term – around the time it released, Thomas Was Alone was born into a world ostensibly more accepting of puzzle-platformers that asked players to move shapes from one end of the screen to another. Yet the explosion of indie games in the intervening years has led Bithell to believe that if Thomas Was Alone were to come out today “it’d sink without a trace.” Whether or not this is true is irrelevant now, and while Bithell admits he couldn’t have planned it this way, he’s forever grateful to have struck it quite so lucky as far as timing goes.

Bithell’s follow up to Thomas Was Alone, the Danny Wallace-narrated stealth-based Volume, echoes his adolescent love for Metal Gear Solid. It’s a puzzle game at heart, though, and although vastly different to its forerunner, one thing that’s stayed constant is Bithell’s desire to deliver an engaging narrative – something which became increasingly important to him over the course of Thomas Was Alone’s development. Now, this is something he feels will be reflected in all of his future work.

“Thomas Was Alone is probably better remembered for its story than its gameplay,” says Bithell. “This showed me that it was something people wanted and that I should continue to explore. I think storytelling is something that’s always going to be important to my games, and I don’t think there’s ever going to be a game I release that’s not going to be doing something interesting story-wise. For me as a designer, writing was always something that someone else did. I made the levels and someone else came along and wrote the script. Realising that that’s actually something maybe I’m alright at, or maybe I can do – that was cool. That’s opened some doors for me and I think it made Volume more interesting.” 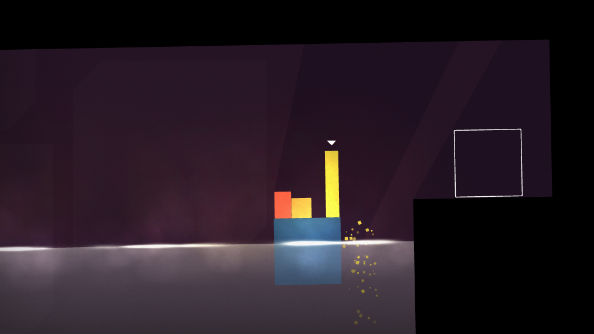 Today, Thomas Was Alone features on just about every device imaginable, and thus continues to gather new players. Post-Volume, Bithell is now sizing up new projects while scaling up his productions as he plans to move his team from the virtual confines of Skype into the physical bounds of an office space. He can’t say too much about what’s next, but whatever it is owes its existence to Thomas and his multi-coloured friends.

“Falling. Thomas was absolutely fantastic at falling,” says Wallace as he narrates the first puzzle of the game. On Steam, Thomas Was Alone is considered an “overwhelmingly positive” experience, according to its thousands of user reviews.

Thomas, it seems, is also fantastic at capturing an audience’s heart.