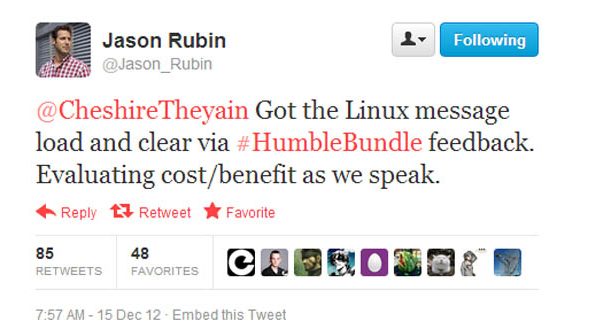 After making more than $5 million in the THQ Humble Bundlle (which a portion of will have gone to charity) THQ are considering developing for the Linux OS.

While the THQ bundle was extremely successful it did spark a little debate from those who were used to most the games in previous bundles to be DRM free and available on Mac and Linux also. Well, the sound of a million GNU-lovers (that sounds wrong) has reached THQ’s ear.

Cheshire Theyain tweeted to THQ’s president Jason Rubin“can you guys consider doing some games for Linux? I know it seems a small market, but look at what Valve is doing.” which got the response“Got the Linux message load and clear via#HumbleBundlefeedback. Evaluating cost/benefit as we speak.”