Meve is angry, and her son is going to know about it. As the pair meet at a feast in the dwarven kingdom of Mahakam, the queen rounds on her son, giving him a verbal hiding the likes of which only a mother can.

Thronebreaker: The Witcher Tales might be a card game, but it’s one strung together with the high drama of castle-age fantasy, the harsher scuffles of medieval life boiling underneath. It’s a very different sell to what developer CD Projekt Red has produced before. But what’s most apparent is that The Witcher’s narrative DNA is as closely woven here as anywhere in the original trilogy.

Playing as Meve, queen of the twin kingdoms of Lyria and Rivia, you return from a peace summit to find your kingdom in tatters. Worse still, the invading Nilfgaardian enemy are at your doorstep. As you wander the continent in an attempt to put your homeland back together, the conflicts that Meve and her army enter are resolved through games of Gwent, in which your soldiers and generals are represented by the cards you play.

If you’re familiar with Gwent, either from The Witcher 3 or the standalone game, the version on offer in Thronebreaker is easy to recognise. But a card game balanced around a single-player campaign is very different to one built for multiplayer. Some encounters in Thronebreaker have specific goals for you to fulfil – destroying a particular card, for example, or keeping your own soldiers safe – so they feel like puzzles to solve. Others require you to plan your moves across three rounds – a facet you’ll remember from previous iterations of Gwent if you played them. These work well as an introduction to Gwent for new players while veterans can enjoy the challenge presented by such restrictions. 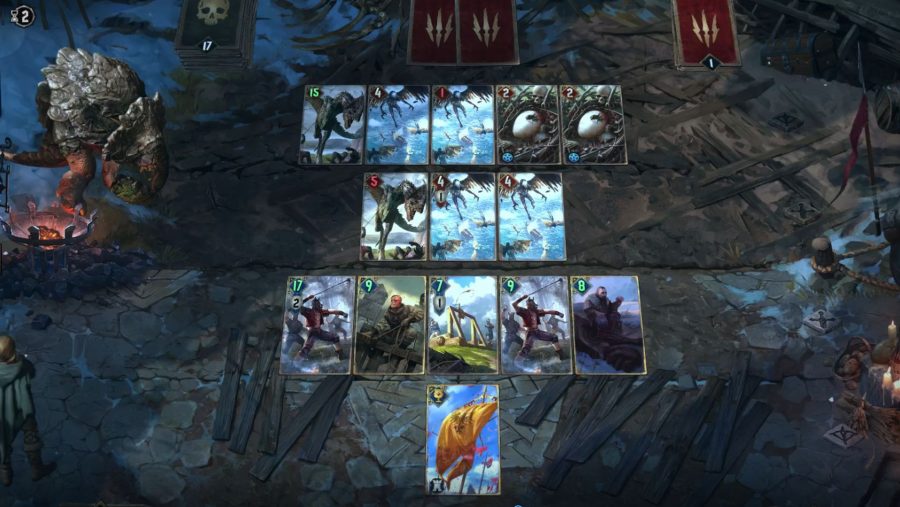 Mostly, however, you need to gear your deck to make sure you’re in a position to rack up as many points as possible in a single round. Finish with more than your opponent and you’ll be victorious. Often that means a specific deck will carry you through swathes of the game at a time. There’s nothing wrong with that, but I get the impression that’s not what CD Projekt is aiming for with Thronebreaker.

This being a Witcher game, that choice soon comes back to bite me

It’s theoretically possible for you to structure and restructure your army on the fly. Meve can set up camp, head to her command tent, and build a new deck with relative ease. Different named characters – your lieutenants and advisors – come with specific effects that allow you to build your army around what will synergise with them most effectively. A siege engineer I rescue from the Nilfgaardians works brilliantly with my mangonels and arbalists. An Aedirnian soldier I come across gets more powerful with every elven unit I kill. A brigand who joins my army is most effective with a pack of slingers at his side. It’s a system I can see trying desperately to emerge, to turn deck building into a complex web of viable strategies, but it’s just not as effective as simply amassing points and damage.

In my entire time with Thronebreaker I only change my army a handful of times, and even those occasions are mostly the result of recruiting a new character. I’ve been able to make my way across half of the Northern Realms while barely straying from a handful of basic units, making sure to use the same simple combos I know will make it easy to rack up a good score. With neither the heightened complexity of the original single-player version of Gwent, nor the deck building on offer in the multiplayer standalone game, opting into every Thronebreaker encounter soon feels repetitive. 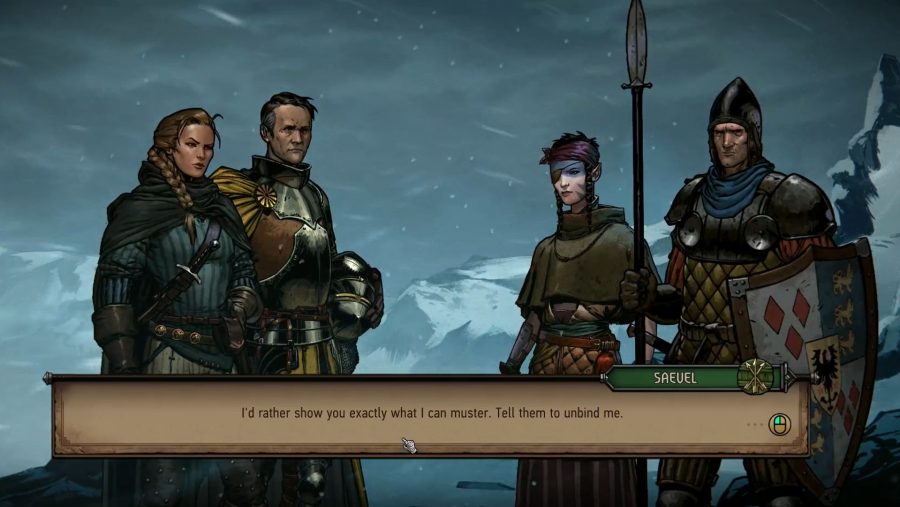 While Thronebreaker struggles to deliver on the potential of its combat, its world and story are a saving grace. Meve is mentioned briefly in Sapkowski’s original novels, but in a manner vague enough that CDPR is able to send her on her own journey, exploring places we never got to see in the Witcher games. From the snow-capped peaks of Mahakam to the sweltering swamps of Angren, Thronebreaker’s narrative scale explores the continent in a way that Geralt never could.

Meve wanders an isometric version of her world. Despite its truncated geography, it’s surprisingly detailed, and each of the five nations you visit feel distinct. Lyria’s rolling fields make way for a labyrinthine forest followed by desolation at the hands of the Nilfgaardians in Aedirn. Mahakam’s narrow mountain passes push you forward, while there’s an oppressive, heavy feel to the dark swamps of Angren. You never really get to visit the larger cities of these realms, but the nations beyond them are full of the same sense of vitality I was struck by when I first arrived in White Orchard.

It’s perfectly possible to arrive in a new place and run straight from one major questline to another, but as in any good RPG, doing so only means you miss out on a wealth of worthy side-quests. For the most part, these play out by having you search out a monster cave, bandit camp, or Nilfgaardian settlement and then defeating them in battle. Then it’s a matter of what you choose to do with what you discover there. One side-quest has me chase after some bandits who raided a temple, to make sure they don’t escape with their ill-gotten gains. After I claim back the gold, I decide to keep it for myself – Meve has an army to feed, after all, and I don’t fear repercussion from the nuns.

This being a Witcher game, that choice soon comes back to bite me. More than one subsequent encounter could play out very differently if I’d returned my prize. It’s these shades of grey – the sense that rarely is anyone ever 100% right or wrong – that make these decisions so meaningful. That’s what you’d expect from a Witcher spin-off game, but what’s different in Thronebreaker are the stakes – they can be agonisingly high. The choices Geralt makes tend to have an impact on his own life. But Meve is a queen, with kingdoms to watch over and subjects to care for, and so you have a lot more to consider. In times of war, it’s easy to argue that a well-fed army is more important than a bunch of starving villagers, but when faced with the human cost of those actions the decision becomes a lot more difficult to make. 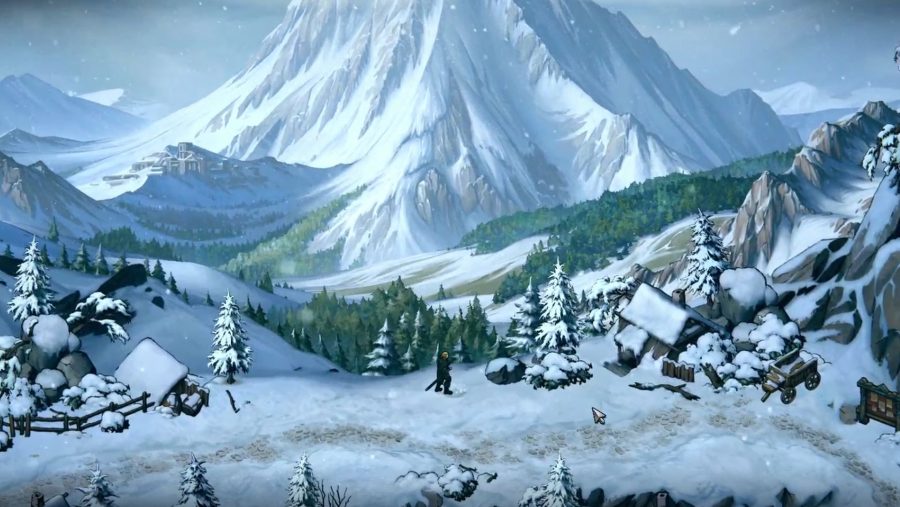 Not all the choices you have to make in Thronebreaker are so gruelling. Dealing with the individual characters you meet along the way is less fraught, and it’s to the game’s benefit. I take almost anyone I can under my wing, which makes for an interesting balancing act as I try to keep different advisers happy, and it also helps weave an intricate narrative web around Meve. Many of my companions never make it onto the battlefield, but I still want to keep them around – if only to increase the capacity for disagreements and inner conflict. One adviser disobeys orders in Mahakam, forcing me to banish them from my party, but that one interaction yields responses from other characters who I rarely hear from. Despite the game’s reduced scope, the characters and side-quests on offer are tangled in the same intricate knots as any in The Witcher 3.

If you’re looking for an in-depth card game then Thronebreaker is probably not for you. There are some great ideas hidden just under its surface, but I find its take on Gwent simplistic. Fans of The Witcher and its bedrock of interwoven stories, however, are brilliantly catered for. It’s not the deepest RPG, but Meve is an excellent choice of main character – a powerful and devoted matriarch the likes of which we don’t see enough of in games. That said, Thronebreaker’s greatest success is its supporting cast. Brilliantly drawn and superbly voiced, each one oozes personality, meaning even this pared-down Witcher experience teems with the same sense of life as its predecessors.

Thronebreaker struggles as a card game but excels as a Witcher game due to its rich narrative and excellent, if simple, worldbuilding.