Paintbucket Games have announced Through The Darkest Of Times, a historical strategy game set in Nazi Germany. The team consists of just two developers, both veterans of Yager, where they worked on Spec Ops: The Line and Dead Island 2.

The game covers Hitler’s reign as Chancellor, from 1933 to his suicide and Germany’s surrender in 1945. Players will lead a resistance group against the Nazi Regime, and must balance the morale of members, scavenge for resources, and evade the Gestapo. The group is comprised of procedurally generated characters who have different personalities, abilities and views. Real historical events will also have to be handled, which will affect your options and your team. 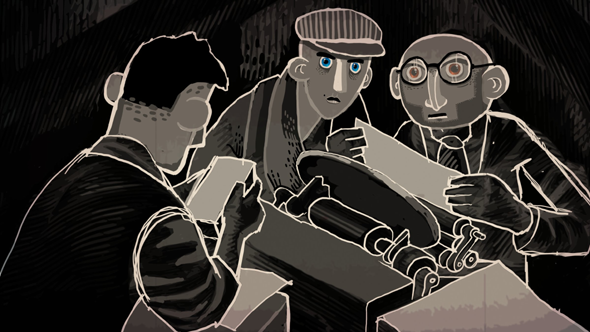 The developers are Joerg Friedrich and Sebastian Schulz, lead level designer and lead artist on Spec Ops, respectively. They have been working on triple-A games for ten years, and had this to say about why they chose to create a more serious strategy game during this terrifying period of history:

“Civil resistance in Third Reich Germany is such a fascinating and relevant topic, and it is source of so many interesting stories of true human heroism in a truly horrible time, that we think it’s a shame there is no game about this yet. We are also convinced, that most games still tackle this period of history poorly and leave out the important parts. Nazi Germany is too often just shown as another faction and its aesthetics are used without commentary or context. Games are a narrative medium just like film or books, they can do better than that – we hope that Through the Darkest of Times will help to move the medium forward and encourages more developers to go there.”

Paintbucket plan to release Through The Darkest Of Times on Early Access in autumn this year.