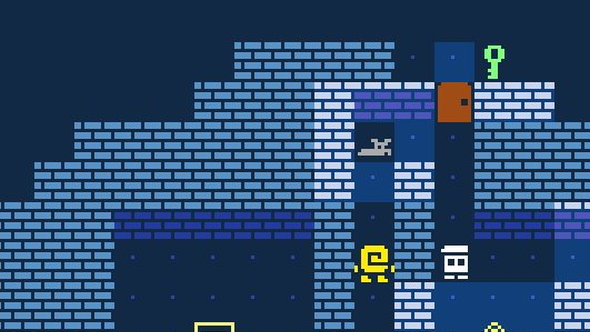 Terry Cavanagh is a solo developer who nonetheless has made a huge impact on the world of indie games – first with deliciously spiky platformer VVVVVV, and then with its follow-up, Super Hexagon, which somehow captured the same spirit of perverse challenge as an abstract flurry of arcade shapes and colours.

While we’re on the subject of great indie games, why not try one you’ve never played?

Where do you go from minimalist perfection? Stealth roguelikes, apparently. Cavanagh has taken the protagonist ‘@’ from the dungeon-delving genre, given it arms and legs, and turned it loose in gem-filled dungeons guarded by goons, dogs and cameras.

In every level, you’re looking to retrieve a key and unlock the route up to the next floor. But rather than swinging swords and casting spells, you’re hoping to avoid cones of sight as your creep about each floor – relying on your ability to catch a guard from just the right angle to knock them unconscious when you’re in a tight spot.

Rather cleverly, each move represents a turn, moving the action forward for everyone. So you’re best off taking your time in determining the best route through a room, or the perfect moment to disable the electronics.

It’s all come together very recently – Cavanagh picked the name via Twitter poll just this weekend – but you can play the entire thing for free on the Tiny Heist site.

What’s the roguelike variant closest to your heart? There are loads now, but Spelunky remains my fave.