There are moments in Titan Souls where everything comes together: you’ve learned a boss’ weakness and attack patterns after dodging around its arena. You struggle through the fight waiting for that moment when it exposes itself and you launch an arrow into its weak spot, taking its one health point. With the titan dead you can bask in relief.

However, those moments rise up amid hours of frustration. Titan Souls is a game for a very particular sort of player.

At first Titan Souls looks like one of the old Zelda games: you play as a small boy armed with a bow and single arrow as you explore a large open world dotted with ancient temples containing giant bosses. However, unlike Zelda, there are no items to find, easy enemies to kill, or princesses to save. Instead your task is to root out the last of an ancient race of titans and kill them, wiping them from the face of the pixel art world.

Your character feels weak and vulnerable. He’s dwarfed by the titans you fight and a single hit will kill you.

Titan Souls may look like Zelda, but it’s inspirations are Shadow of the Colossus and the Dark Souls games.

Acid Nerve have focussed all their attention on making 18 distinctly difficult boss fights. Ranging from a giant cube which rolls around its arena shooting lasers from the giant eyeball embedded in its side, a huge living statue which bashes the ground with its stone fists while also shooting at you with a laser, and a bulbous plant with toxic vines that fills the air with hallucinogenic spores.

Once you discover a boss you need to set about learning its movement patterns and its weakness. In the case of the eyeball cube, it rolls about its arena in straight lines, and it can only shoot the laser from the face of the cube with the eye on the surface. It doesn’t take long to learn how to roll out of its path with a tap of the ‘A’ button. To kill it, though, you have to shoot your arrow into its eyeball. Its eyeball that shoots lasers. 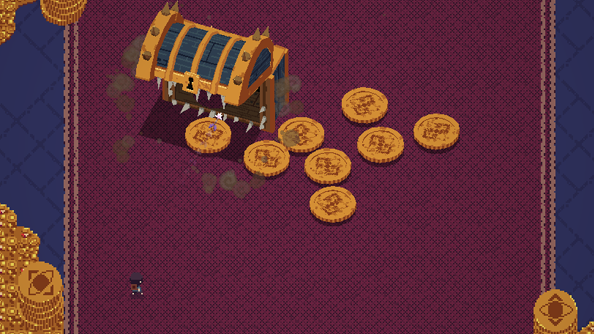 The boss fights in Titan Souls are more punishing than other games. The bosses only have 1HP but they move faster, recover quicker, and shoot more frequently. If you hope to win you have to react faster and play smarter. As you’ve only one arrow, in the battles when you have to deactivate a boss’ shield, you need to think about where the arrow is going to deflect to after it hits so you can pick it up and fire it into the unshielded boss before it reactivates its protection.

It took me six hours and 397 deaths to complete my first play-through of Titan Souls. I didn’t even kill all the bosses, skipping three that I just couldn’t beat. If, like me, you find games like Super Meat Boy and Dark Souls too difficult you’re going to find Titan Souls frustrating. 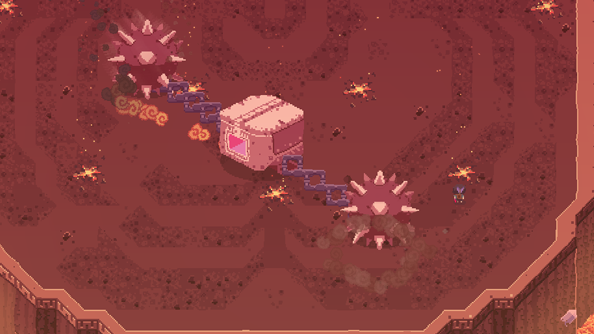 One boss, down under the earth in the fire pits, had me wanting to punch the screen. It’s a giant stone skull with two ball and chain maces. It drags itself around the arena by swinging a mace at you and then retracting the chain. You’re forever sprinting and rolling away from these maces. Its weakness is an exhaust vent on its backside which it always keeps facing away from you except for when you roll in close to the skull and it starts spinning around the arena like a heavily armed tornado. You have to shoot your arrow into that tiny vent in the fraction of a second it’s facing you and before you get clobbered by a mace.

I spent nearly an hour fighting that boss. Retracing the same path between the spawn point and its arena repeatedly every 30 seconds. Spawn, walk, die, repeat. When I did eventually kill him I didn’t feel satisfied, I felt like I’d fluked it.

In other games the boss fight is a culmination of an area. You’ll have solved puzzles and fought waves of weaker enemies to get to it. In Titan Souls there’s no pacing curve. You walk from an uninhabited world straight into an extremely hard fight. In other games, too, boss fights are usually multi-stage, ramping up with difficulty as you play. In Titan Souls, because they only have one HP, they start in top gear with all their abilities active. You’ve no time to ease into a battle or warm up. 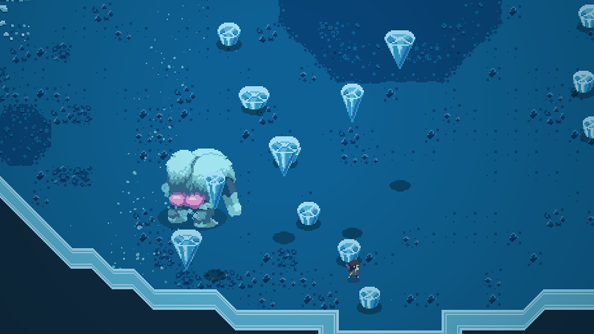 All of this makes Titan Souls a tough game to recommend. Personally, I found it a chore, becoming so caught up in my frustration that it became difficult to enjoy the detailed pixel artwork, take in the soundtrack, or even find satisfaction in finally killing a boss. However, I think there are players who will love this game. It is an unforgiving, unrelenting challenge that almost no other game offers. Once you complete the main campaign you can unlock a hard mode, an iron man mode, and even a mode which takes away your dodge roll and run ability. You can even activate those modes in tandem for an even greater challenge.

What I can recommend is trying out Titan Souls’ demo on Steam. That should give you an idea of whether you’re the sort of person this game’s been made for.