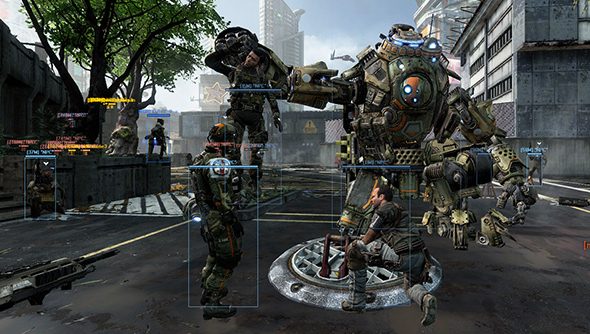 When I play Titanfall, everybody’s got these huge luminescent boxes drawn around them regardless of where they are on the map. These neon frames appear through walls and ceilings and floors, even when I can’t see your physical body directly, so that I know where you are on the map at any given time. I’ll know you’re coming around a corner or out of a doorway before you actually appear, which makes it really easy for me to shoot you in the face, like a mad psychic. Like Uri Gellar on a rampage.

Making it even easier for me to shoot you in the face is a clever bit of software that aims on my behalf. I can set it to automatically point my crosshair at a chosen body part whenever I push a button. So I’ve got it set to snap to your face whenever I press the W key, which is also the key for running forwards. This means that if I’m running towards you in Titanfall, I’m simultaneously aiming with laser-precision at your unsuspecting skull.

This is probably how God would shoot you in the face, if he had a gun and wanted to. But I’m not cheating for the typical reasons people cheat at online shooters. I’m cheating in order to investigate how such things work. And they work really well. Well enough that Titanfall doesn’t try very hard to detect illicit cheating software running alongside the game, but instead checks for, among many things, inexplicable spikes in apparent player skill. If a player’s kill-death ratio is in the gutter on Monday and skyrocketing on Tuesday, a little alarm goes off in Respawn’s office, figuratively speaking.

This isn’t a guide to cheating, but the mechanics of running cheating software are interesting enough to be worth writing about. I’m running a third-party program alongside Titanfall, a tiny download tool with a simple login prompt. This program doesn’t contain any code that interferes with the normal operation of Titanfall, and so appears as benign to the game’s rudimentary checks for cheating software. Instead it downloads and injects new code into the game while it’s running. The code grants me these in-game superpowers, such as the ability to see through walls (called ESP) as well as automatically target other players (called aim-botting).

Because this dirty code isn’t stored anywhere on my machine, Titanfall never even knows that it’s there. Instead, the cheat code is stored online, on a server to which I’m subscibed for about ten pounds a month. Because it’s online it can be quickly updated by the cheating software’s authors. It can take anything from hours to days for cheats to begin working again after a Titanfall update.

First I launch Titanfall, at which point the game gives itself a virtual pat-down to ensure there are no illicit bits of code already running in the background. Once the game is satisfied that there’s no cheating software to be found, I alt-tab out to the downloader, which downloads and runs a file about 250kb in size. This is the cheat. I can now press a key to launch a hidden menu at any time during the game, which grants me lots of lovely cheating options.

It’s highly configurable. You can set the portion of the screen inside of which the aim-botting tool will work. That is to say, you can have it snap to the head of anybody currently visible on screen, or only snap when an enemy player is within a given distance of your crosshair. It’s important when avoiding detection by Titanfall’s cheating algorithms that you aren’t quickly and repeatedly turning 90 degrees to aim precisely at another player, rapidly and robotically snapping from enemy to enemy.

Alongside noticing dramatic and sudden increases in your score, detecting superhuman precision is one method by which Titanfall catches and flags cheaters. To combat this, cheating software deliberately introduces a “humanising” level of imprecision to try to fool the game into thinking that you’re still a real person: just enough to (mostly) trick the server, but not enough to impact on your ill-gotten ability to unfairly murder other players.

Using ESP draws bright rectangles around other players even when they’re behind walls. This causes some strange and unique behaviours among new cheaters that can make them readily detectable by anti-cheating algorithms. For instance, the less clever cheaters using ESP will often instinctively point their weapons at players they cannot actually see yet. Worse still, some inexperienced cheaters will take shots at players hiding behind obstacles, based only on information given to them by cheating software. 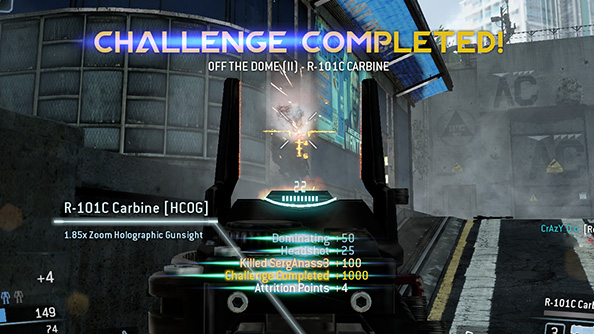 Like Clark Kent lagging behind in a footrace, good cheaters will disguise their superpowers whenever they can, with many opting to only use the almost entirely undetectable ESP cheats to peer through walls. On the other hand, there are those that abuse cheats and quickly get themselves banned. “Rage cheaters,” according to one of the heads of the developer of the cheating tools I’m using, “pick the gun with the most ammo, turn all the cheat options on and then kill everybody that they can kill as quickly as possible. They are also the ones that get banned the fastest.”

The three other kinds of player using his cheating software, he says, are “pro”, “legit” and “curious”. Pros use more subtle aim-assistance tools rather than a straight-up aimbot, so that it’s not immediately obvious to other players that they’re employing cheats. Legit users, he continues, stick exclusively to the graphical enhancements offered by the software, things like ESP, wallhacks and radar. Meanwhile the curious cheaters are most often server admins trying to understand what the most popular cheats are capable of.

They’re all, remarkably, willing to pay a monthly subscription fee and risk their Titanfall account to access and use these cheats. For their money players get to benefit from fairly rapid updates to the cheats as new anti-cheating methods are rolled out and subsequently worked around. Anti-anti-cheating is a huge part of the development of this kind of software, with the developers seeing themselves as Robin Hood-esque freedom fighters, forever locked in a cheating arms race with a tyrannical publisher. They’re proud and surprisingly honest. They even offer refunds to their customers if a particular game’s cheats are unavailable for an unreasonable length of time. 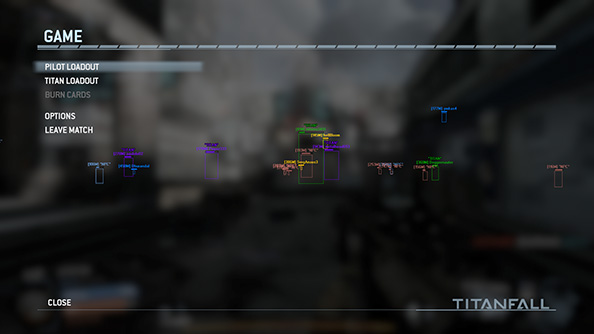 Those found to be cheating in Titanfall are cordoned off into servers populated exclusively by other cheaters, a sort of “Wimbledon for aimbots”, a feature gleefully announced by Respawn a number of months ago. It’s a clever PR move, says the cheat developer I’m speaking to, but in practice it does little to combat determined cheaters who’ll happily re-purchase the game in order to rejoin legitimate players. It also, he notes, increases lag for honest players as Respawn are still hosting these cheaters on their servers rather than banishing them outright.

The cheat dev does concede that FairFight, the clever anti-cheating algorithm that tracks suspicious playstyles and sudden changes in your skill level, is a more effective means of combating cheaters than PunkBuster, VAC and other cheat code detecting software. It forces cheaters to moderate their own cheating behaviour, to avoid appearing too skilled or risking taking impossible shots. And in practice it makes cheating less visible to the untrained eyes of legitimate players, perhaps giving the impression that Titanfall is less beset by cheaters than it likely is, and so creating a fairer feeling game overall.

It took some practice with auto-aiming cheats and magic eyes before I began to rise through the leaderboards. And when I did I felt terrible. I’d snipe pilots in mid-air as they ejected from their exploding Titans, fully aware that, had they stopped to view the resulting kill-cam, my perfect aim would make it extremely obvious I’d been cheating. From a rooftop opposite, I’d track players as they ran through buildings, waiting for them to pop out from behind a window ledge before snapping my aim to their head and pulling the trigger.

Cheating is too easy, but it’s undeniably fun. The familiar dopamine rush of victory is exactly the same as when playing without cheats, but now that feeling is on tap. Even consciously knowing that I didn’t deserve to win — and knowing that I was being anti-social, making the game less enjoyable for other players — didn’t diminish the joy of winning.

Conversely, unlocking badges and levelling up felt dirty, like I’d tainted my own stats with my cheating. No longer did the stats page truly reflect my own abilities. Now I can never know how accurate I really am with a rifle, and that makes me a little bit sad. I’ve now given up cheating, and apologise unreservedly to whomever I shot to bits while cheating. It felt good.

That’s probably why some players cheat. That’s probably why humans cheat at all. On a primal level we’re all asshole monkeys looking for an easy thrill (or in some arenas of competition, giant bags of money). Whether you’re willing to steamroll honest players in pursuit of your Titanfall kicks however, depends a little bit on how sociopathic you are. Well, that, and the folks at Respawn trying their level best to dump you in a cheater’s gulag.