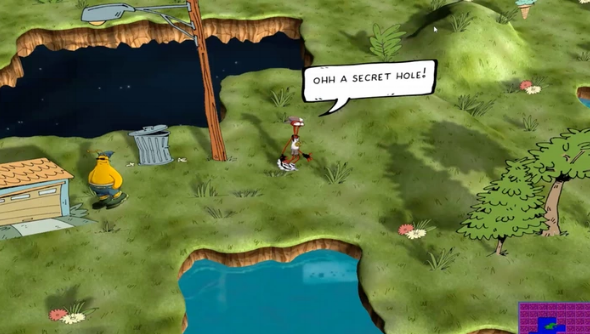 Toejam and Earl really does shout ‘the 90s!’ pretty loud. It’s got all the hallmarks of design that were so predominant back then: a Saturday-morning cartoon sense of fun, humour that doesn’t make all that much sense, and a protagonist duo that were intergalactic rappers stranded on earth.

If you’re suddenly feeling nostalgic for your Sega Genesis, worry not: a brand new Toejam & Earl game is in development. Back in the Groove combines features from all three TJ&E games, and will hit the PC provided its Kickstarter campaign is a success.

In hunt of a modest $400,000 is Humanature Studios, headed up by Greg Johnson, one of the original games’ co-creators. He’s now studio head at Humanature, and he’s brought the rights to TJ&E with him. The plan for Back in the Groove is to make a game largely similar to the roguelike first game, but this time in isometric 3D with 2D animated characters and props, a sprinkling of the stronger features from games two and three, and some new ideas to boot. There will be a focus on co-op to recreate those days of sitting on the sofa with a friend, but you’ll also be able to hop online to play with buddies, too.

Levels will be randomly generated and stacked in a similar manner to the classic game, but the 3D worlds will allow you to zoom in and out, and character placement will make more sense. Also like the classic game, repeated playthroughs is the expectation, but now a metagame will encourage players to start over again and again. A growing comic book will be filled in with new pages after every playthrough.

There’s a vast collection of rewards to pick up if you fancy backing, from simply your name in the credits all the way up to collectable figures and dinner with the devs. If those sound appealing, head over to the Kickstarter page and drop some cash.