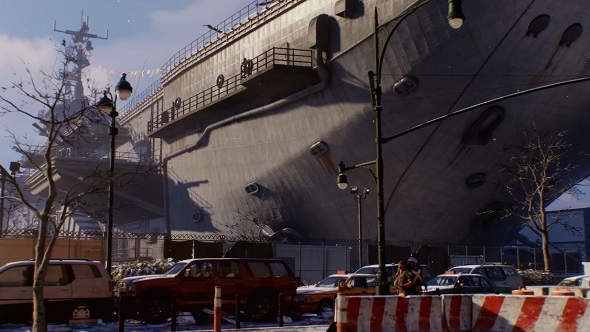 Acting as The Division’s biggest content update to date, Ubisoft have revealed more about the 1.8 “Resistance” patch that’s coming this autumn. Its adds the West Side Pier area, along with two brand new game modes.

Need something to play with friends? Check out our list of top-notch co-op PC games.

The West Side Pier consists of two zones, where The Division’s four enemy factions have put aside their differences and forged an uneasy alliance. It’s your job to investigate West Side Pier and find out what has caused these groups to work together. Seeing as a whacking great aircraft carrier is docked at the pier, my guess is that it’s hiding something in its depths and these factions are working together to get their hands on what’s inside.

When exploring West Side Pier, you’ll be able to play through two new modes; one for PvE and one for PvP. Resistance is the PvE mode and it sees Division agents fighting through waves of enemies from each of the four factions. The longer you and your team of three buddies last, the more loot you will gain. The PvP mode is called Skirmish, and it has two teams of four competing in a Team Deathmatch style setup. Teams gain points every time a downed player is eliminated, with each team scrambling to get the most points before the timer runs out.

Patch 1.8 also adds the new Camp Clinton social hub, where you can equip new gear and recruit other agents before heading out onto West Side Pier. The patch also reworks the Rogue mechanics from patch 1.7, as well as allowing you to upgrade your favourite equipment.

For more information on the Resistance patch, Ubisoft will be holding a first look livestream tomorrow at 08:00 PST/11:00 EST/16:00 GMT over on the official Division Twitch channel.