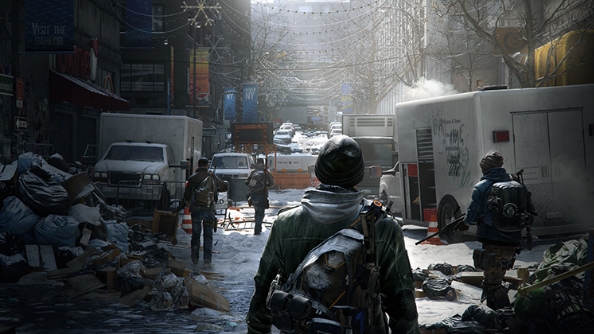 The strongest element of The Division’s RPG genetics is its classless progression system. As you play you’ll gradually unlock every skill in the game, and those skills can be swapped and changed at the drop of a hat. This means you can re-spec any time the situation calls for it, and there’s no penalty or charge.

If The Division has got you hungry for more friendly adventures, why not try one of the best co-op games on PC?

While embracing freedom is liberating, when it comes to being in a squad having some focus is always handy. If you’re unsure how to specialise, we’ve put together this guide to offer five different character builds to help you on your way.

Each build takes into consideration the types of weapons and gear you should equip, as well as skills and talents. Skills are the active abilities you can use in battle, and you can equip two from any of the skill trees, plus a third ‘Signature’ skill. Talents are passive buffs, and the further you are through the game you more of them you can equip.

It’s worth bearing in mind that these builds draw from the full skill tree, so you may not have access to some skills right away. Just keep working on upgrading your Base of Operations to unlock the relevant skills, and use something you find handy in the meantime.

Also: our builds focus on core skills. Each one can be further diversified by choosing modifications for each of those suggested skills. This means every build can be tailored to suit your needs or preferences. 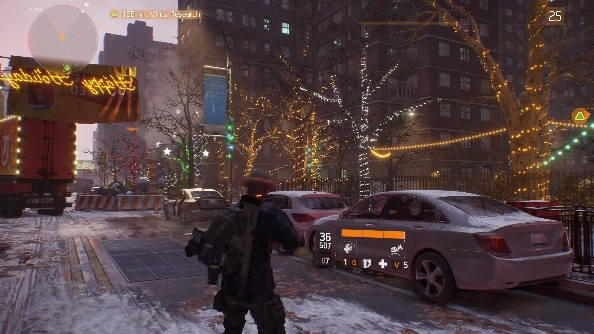 The Division is primarily built to be played as a team, but there are plenty of opportunities to operate as a lone agent. For these times you’ll need to spec your character as a solid all-rounder: a solider who can deal the damage while successfully keeping themselves alive.

First Aid is the most suited skill for self-preservation. It provides a very quick boost back to full health and can be modded to over-heal you for a little extra hardiness. Your second slot should contain a full-on offensive option. Turret is a very useful option here, as it (sort of) acts as another player, laying down suppressing fire so you can attempt flanking maneuvers.

Survivor Link is an ideal signature skill as its defence buff can keep you battling for longer, and your movement speed is temporarily increased (ideal for beating a hasty retreat).

Alternatively, equip Recovery Link as your signature skill for healing duties, and swap out First Aid for Pulse, which is very useful for discovering enemy positions. You wouldn’t want to walk into an ambush now, would you?

Critical Save boosts your damage output by 40% when you use a medkit at low health, something you’re likely to do often. Precision pulses enemies with every headshot, which is ideal if you’re not using the Pulse skill. Tech Support will keep your skills active provided you score kills, which is great for keeping your turret online longer.

You ideally want to keep enemies at range as a solo player, so as not to get in any emergency scrapes you can’t heal yourself from. Assault rifles and LMGs are the way to go. Be sure to carry two different weapon types though: this means you have a bigger pool of ammunition to draw from, so running out of bullets with one gun will still mean there’s plenty in the other.

As you’ll be using gadgets frequently in your battles with this build, try to use equipment that builds your electronics score. This helps keep your cooldowns low, and thus increase their frequency of use. 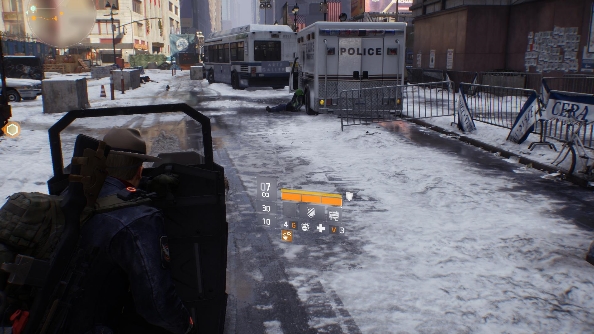 Join a team, and a whole wealth of tactical options are opened up for you. No longer do you have to think about being well-rounded and looking after your own back: now you can specialise. A tank absorbs damage like a champ, and is there to distract the idiot AI while another plays sneakily flanks and guns them down from the side.

You’ll absolutely need the Ballistic Shield; a portable riot shield that’s nigh-on indestructible. You can move up the field without any danger to yourself and draw enemy fire. For your second skill, consider what you want to offer. Smart Cover can be launched at existing chest-high walls to make them offer buffs to those hidden behind them, which is great for boosting the effectiveness of your buddies. If you’re moving up through open-ground areas through, Mobile Cover lets you slam down barricades to keep you safe.

As you’ll be taking more damage than anyone else, equip Recovery Link as your signature just incase your medic isn’t able to help you in a critical moment.

Repo Reaper is your best friend here: it replenishes a clip of primary ammo for every kill with your sidearm, and you’ll be using your sidearm a lot with your Ballistic Shield. On The Move reduces incoming damage if you score a kill when moving, which should help keep you alive when absorbing all that fire.

An LMG is great for sustained fire and keeping enemies suppressed, which can help your co-op partners flank. You’ll also need a good, solid pistol to use when you’ve got the Ballistic Shield equipped. Don’t use the hand-held shotguns; as high as their damage is, you’ll be reloading every second shot, and that’s not ideal when the enemy’s sights are focused on you.

Being a Tank is all about surviving the longest, so equip gear that promotes your stamina stats. The bigger your health bar, the better tank you become. 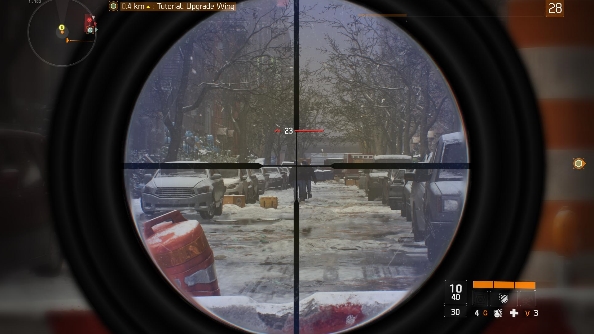 In all honesty The Division isn’t the most satisfying game for a sniper. Thanks to RPG stats and health bars, a well-aimed bullet to the face won’t drop a thug instantly. That doesn’t mean a marksman isn’t a valuable asset to a team though. A long-range support agent who can reliably and consistently cause big damage is a massive boon to any group.

Pulse is a very useful talent for a marksman; not only are you there to take out tangos at range, but you’re also a spotter. While your rifle’s scope is great for hunting targets, the Pulse skill will highlight local enemies quickly. Then both you and your team can quickly focus fire. Your second skill should be a Turret. When you’re scoped it’s easy to forget that combat may be happening right under your nose, so a Turret will defend you while you focus on targets further afield.

Since your primary role is to kill the enemy as fast as possible, make sure your bullets punch hard with the Tactical Link signature skill, which buffs everyone’s damage output within its area of effect.

One Is None offers a 50% chance of a headshot not costing a bullet, and since you’re likely to be landing rounds between the eyes frequently it’s a very useful Talent to equip. Tactical Advance is also handy; you’ll be moving around a fair bit to remain in the best sniping position, so increasing your damage output for each meter you travel between cover is a great, practically free upgrade. Steady Hands will keep your rifle’s recoil under control.

A marksman rifle equipped with the very best 12x scope. You’ll also want some kind of muzzle mod attached that reduces your threat; the lower your threat, the less likely enemies are to focus their fire on you. Ideally you want to be far back and taking no damage so you can reliably keep popping heads. Fill your other slots with an SMG for close-up encounters, and perhaps a hand-held sawnoff shotgun for the very messiest battles.

Look to equip armour and mods that help increase your Firearms score, which helps you deal more punishment. You want to make sure you’re living up to your full damage potential. 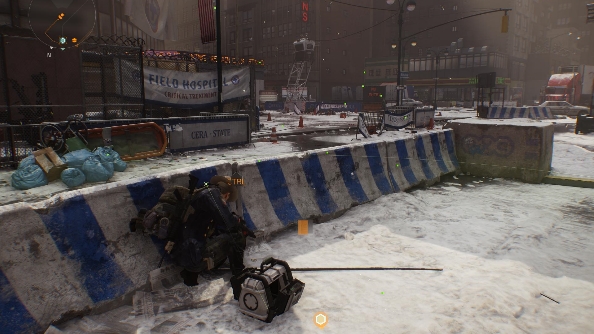 With a third of your Base of Operations dedicated to healing, it’s no surprise that you can build a very effective healer class. Play it right and your squad will never find themselves downed in battle, provided you’re still on your feet.

First Aid is a quick fix; the moment you see someone at low health a swift deployment of this skill will see their health bar soar back up to 100%. Consider this your one-to-one medical care. If pain is affecting more than one member of the squad, use your second skill: Support Station. It’s essentially a safe filled with drugs and will heal anyone within a large radius. It’s much slower than First Aid, but if everyone ducks behind cover and is patient it can bring the squad back to fighting fit status. It can also be modified to dispense ammo or revive dead agents, too.

Throw Recovery Link into your signature slot, and you’ll be fully prepared to keep everyone healthy.

Combat Medic is the clear winner here, as when you heal yourself your buddies get some medicine too. Triage is the other no-brainer: using a heal skill on an ally reduces your cooldowns. Battle Buddy is also very handy, as it decreases damage dealt to you and a friend when you revive them.

A medic needs to be on the move constantly, jumping from patient to patient and laying down suppressive fire so they can get the field surgery done. Pack an assault rifle and LMG, ideally with sights for a little extra range.

Since playing medic is all about constant deployment of healing gizmos, you’ll want to outfit yourself with anything that increases your electronics score. The higher it is, the lower your cooldown times, and the more frequently you can fire off healing skills. 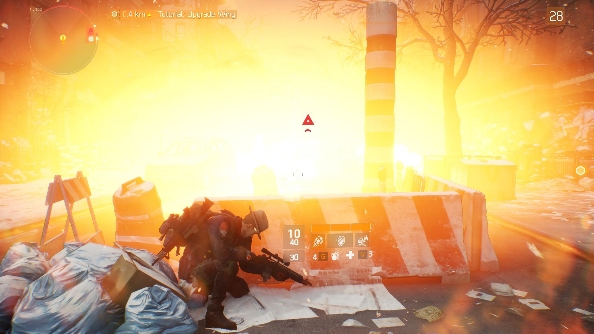 The Division does explosions really, really well, so why not be an agent devoted to causing fiery chaos? The tech skill tree offers two very exciting options for blowing stuff up, and they should be liberally applied to any street containing hooded thugs or flamethrower-wielding nutcases.

Sticky Bomb and Seeker Mine. The bomb can be launched from range, and then detonated remotely for a fireworks show on demand. It’s essentially a bit like using a grenade, but the boom is bigger and you don’t have to worry about getting the timing just right. The Seeker Mine is even more fun: it rolls around in search of a target and then erupts like an ignited gas factory when it finds a bad guy.

Augment them with use of the Tactical Link signature skill to increase your damage output, and you’re an enemy squad’s worst nightmare.

Chain Reaction is wonderful: if you kill an enemy with an explosive, everyone else caught in the blast radius takes 40% more damage. Demolition Expert increases the damage of explosions for 15 seconds if you score a kill with an explosive, so it’s great for chaining together your two skills.

As your damage is primarily going to be coming in big doses every minute or so, you’ll need something for sustained pressure during cooldown periods. Provided it’s an automatic gun you can’t go wrong, so feel free to grab and SMG, LMG, or assault rifle.

Electronics are going to be your go-to here, since your gadgets are your key damage dealers. Strap on the relevant armour and you’ll be fine.

Those are our suggestions for effective class builds, but what combinations of skills and weapons have carried you to victory? Let us know your best builds in the comments.