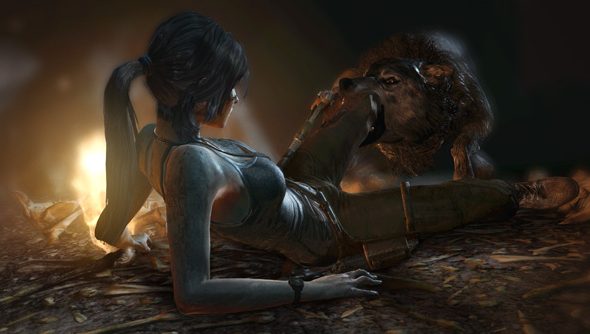 Oh Lara Croft, you flipping clumsy clod. Slipping everywhere. Sliding down muddy inclines on your bum. Smashing into big wet rocks with your face. Falling on jagged bits of rebar and skewering your kidneys. Rocketing along a highway atop a giant ACME firework. Having your beak blown around to the wrong side of your head. Each time Tomb Raider’s malevolent, unseen directors take control of the camera you’ll wince in anticipation of whatever gruesome injury they have in store for the crypt plundering masochist. Don’t go up that ladder, Lara, it’ll only fall into that nearby vat of bubbling acid. Don’t peek over that window ledge, Lara, somebody will only chuck a brick at your face. I played Tomb Raider for three hours before Lara got her first break — that’s break as in ‘stroke of fortune’ rather than ‘shattered femur’ — it’s honestly exhausting work, all that caked-in mud and blood.

Tomb Raider is the third recent videogame about an ordinary, civilised person becoming stranded on a tropical island and having to sacrifice their own innocence and humanity in a harrowing and reluctant series of murders in order to survive in the wild. The other two are, of course, Far Cry 3 and The Sims 2: Castaway. Lara’s own story sees her marooned when her expedition ship is capsized by a storm, leaving her and her friends under attack from a group of mysterious and probably evil islanders. This, infamously, also sets the scene for Lara’s first murder, which presumably also sets her on the path to the eventual zoological genocide seen in her later life. Unlike Far Cry 3’s open-ended world, however, Tomb Raider presents you with a patchwork of walled off hub areas large and small, with narrower channels of hand-crafted platforming and adventuring levels in between. In the hub areas, you may explore and hunt wildlife at your own pace, amassing salvage and murdering wolves and deer for sustenance and experience. The salvage can be spent at your camp to upgrade your weapons, turning your stone-age axe into a handy light-weight metal ice-pick, your bow into a bow with a slightly more taut bit of string and your gun into a gun with a higher capacity. Each weapon can have several available upgrades, dependent on how much salvage you can scoop up as you play.
Your skills can be upgraded as you go, using experience points earned by stabbing wolves and shooting men. One of the first you’ll unlock is Animal Instincts, which allows you to spot rare animals and hunt more exotic game. Combat-focused brawler skills will unlock some dirty fighting tricks, such as chucking a fistful of dirt in an enemy’s face to temporarily blind them. You’re free to ignore all of this survivalist distraction in pursuit of the game’s plot, though the sheer amount of salvage material falling at your feet makes it difficult to avoid at least passively improving your gear. Similarly, Lara’s rarely gagging for a bit of venison. Hunting wildlife is never an urgent task and, besides one compulsory tutorial early in the game, only ever presents itself as an optional pursuit. Bleak, rain-battered cutscenes and whimpered dialogue suggest a harrowing and desperate fight for survival, but for the most part you’ll be happily bouncing around ruins and tombs and hanging out of trees like a satiated and care-free Olympic gymnast. Hunger-screws may be tightened later in the game, but in the first few hours at least, hunting is more for sport than for survival.
In the adjoining sections between hubs you’ll find the bulk of the versus-human combat. New since the E3 build is the sequence following your escape from capture in which you head for the island’s radio tower in an attempt to send a distress signal (which you successfully manage to do, thwarting three hours of rotten, injury-prone luck). Your route takes you through a Japanese bunker abandoned during World War 2 and now re-occupied by gun-toting islanders, some armed with crossbows, others armed with flare guns. At this stage your armoury’s still scant, including only your bow and a side-arm (and for a short while an assault rifle), and ammunition is limited enough that you’ll often resort to stealth attacks and hand to hand combat. One skill, unlocked mere hours after she’s come to terms with killing another human, allows Lara to unflinchingly assassinate any stunned enemy within reach. The bunker is strewn with flooded industrial corridors and broken pipes ejecting noxious, explosive gas. Here, you can use silent takedowns and carefully planned movements to avoid detection, though certain rooms will force you into all-out firefights. One section sees you stumble into a darkened room only to be illuminated by the fwump of a dozen floodlights as you’re ambushed by a small army. Guns in Tomb Raider are loud, a counterpoint to the sleekly natural bow kills, and when indoors your pistol cracks the air satisfyingly. Enemy AI in combat is flighty, soldiers move around from cover to cover as much as they can. In one instance a soldier manoeuvred himself towards the opposite side of the crate I’d been ducking behind, resulting in a slapstick, Naked Gun style over-the-box shootout. Funny, but not very Tomb Raider. Not very anything.

Much more like Tomb Raider are the bits where you raid tombs. The largest hub area available in the first few hours is a long abandoned native village, a maze of ledges and ziplines set across multiple vertical levels and dominated by a crashed World War 2 bomber, across which you must make a perilous climb. Set around this hub area are no fewer than two actual tombs to discover and explore. ‘Solve’ is perhaps a better word, as the first mini-tomb contains an elaborate physics puzzle in which you must push barrels into baskets set on pulleys, before setting fire to weights and making a few well-timed jumps. Your rewards are relics, masks and old coins that you can zoom in on and rotate around and look longingly at. Careful examination of some relics reveals more information, such as the face-paint you’ll find by peeking at the back of the tribal mask. The second of these optional mini-tombs was hidden, inaccessible until Lara learned a new skill. Fast travel allows you to quickly move between camps set up in these hub areas, meaning you can easily back-track to re-explore locations with freshly unlocked skills.

Also, the words ‘TOMB RAIDED’ appear on screen following a successful grave robbing. Which is brilliant. Fears that Tomb Raider would be mired in the worst sort of button-mashing, quick-time event hell are only semi-warranted. Once the game begins to relinquish more and more control to you in the wider hub areas, the on-screen prompts to mash keys become thankfully less frequent. They’re still regular enough to frustrate, if you’re irritated by that kind of thing, though they primarily crop up in the more intensely directed between-hubs routes. And they’re fairly exciting things anyway, with Lara dodging boulders and leaping over chasms as music swells and the camera angles spin around to reveal bottomless pits and perilous drops. There’s less hand-holding going on here than in Uncharted, the Playstation game from which Tomb Raider takes many, many cues.
Also frequent are shaky-cam cutscenes and extensive Lara monologuing as she scribbles in her journal at campsites. Her character is jarringly feeble (and off-puttingly human) at points, in a way that would be perfectly sensible (it is, after all, the point of the game’s beginning) if it didn’t absolutely clash with your ultra-violent actions as a player. “You’re a Croft, you’ve got Croft spirit, you big Crofty Croft,” encourages your ersatz mentor and expedition leader early in the adventure. “I’m not cut out for this, wibble wibble,” you reply as your tug your makeshift axe out of yet another man’s skull. That psychological gulf between player-controlled Lara and cutscene protagonist Lara should narrow as the story unfolds and two become closer, but it’s an awkward setup at first. It’s nonetheless gratifying to see proper, considered character development in Lara, while the rest of the cast are funny, interesting and well-acted, providing some scenes that are light-hearted rather than comic. Finally reaching the top of that radio tower on the snowy peak of the island’s mountain delivers a palpable sense of relief too. Exhausted, unexpected and welcome relief. Where any other game would snatch that victory away at the last moment, it’s instead handed to you by a willing, uncharacteristically benevolent script. Even the weather abates at that moment, as if those unseen game directors have suddenly decided to stop being arses for a few minutes. Like Ed Harris at the end of The Truman Show.

That’s only a few hours into a dozen-hour long game, however, and it’s where the hands-on session ended. One can only guess at what happens immediately after that victory: maybe the radio tower collapses, or maybe Lara falls two hundred feet and lands on her faithful golden retriever, who it is revealed had stowed away on the boat as a surprise. Whatever happens, it’s guaranteed to be awful enough to fuel at least ten more hours of scraped knees and bloodied knuckles. There’s a lot more to be seen of Tomb Raider ahead of its March 2013 release, with much of its appeal wrapped up in later locations, plot points, skills and weapons. And tombs I guess.

Thank god this one has tombs.