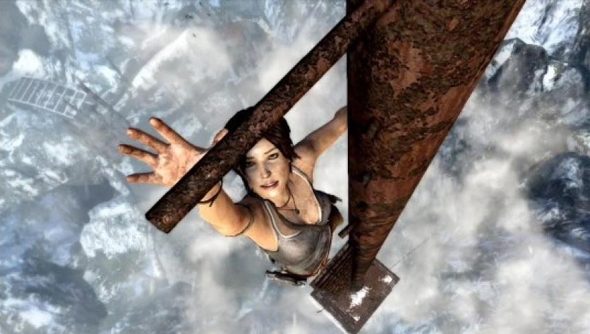 In scenes largely similar to those recounted in Tinker, Tailor, Soldier, Spy, LucasArts veteran and Crystal Dynamics’ former head of all things Tomb Raider, Tim Longo, has defected to a studio that doesn’t produce PC games.

Longo vacated his position at Crystal Dynamics in 2011 to work on an FPS at LucasArts – but as with everything else in the works at the doomed publisher, we know how that turned out. His LinkedIn profile reveals he’s now taken up a position as creative director at 343 Industries, of Halo 4 fame.

343 are known to be working on the next Halo game – only for the Xbox One, natch – and its accompanying console-native TV series. They’re also working on at least one unannounced project, though, in an immediate future they’ve described as “both exciting and daunting”.

Perhaps that project will be the PCiest of all PC games. Given that 343 were built from the ground up by Microsoft, perhaps not.

Longo’s first creative directed a thing at LucasArts, where he ushered the tonally unique and tactically excellent Republic Commando through three years of development on Xbox and PC.

After a brief and unlikely stretch as a wilderness ranger for El Dorado National Forest in California, he took on a senior design role at Crystal Dynamics in 2006. Longo went on to oversee a wonderful game about falling over and shouting a lot – Tomb Raider.

Crystal Dynamics are currently working on a new Tomb Raider, plus a ‘definitive edition’ of this year’s game for the new consoles.

How do you lot feel about the rebooted Lara, now we’ve had a few months’ distance?