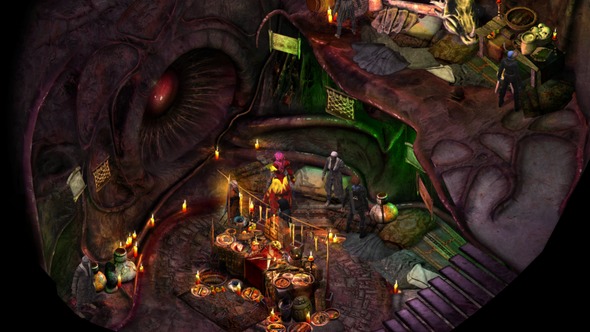 Planescape: Torment is among the best old PC games that are still worth playing.

Except, that’s a knotty statement. What did that famously revered RPG actually feel like in the first place? One of its most commonly cited qualities is that it feels so different. In contrast to its contemporaries past and present. You’re not on a quest to save the world in Planescape: Torment. Nor do you visit any cosy taverns in woodland villages, slay any dragons, or romance your Elfin companions. The one bar in the game is called The Smouldering Corpse, and it’s more than just a foreboding name for its own sake. It felt strange and singular when Black Isle released it in 1999, and that hadn’t changed when I went back to replay it in 2014, just before the isometric RPG renaissance we’re enjoying just now.

So yes, Torment: Tides of Numenera feels just like its precursor: completely different. 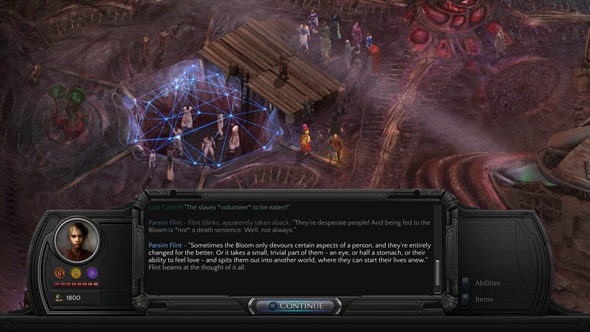 To put it less facetiously, Tides of Numenera summons a recognisable atmosphere to veterans of Planescape with its art direction, characters and the strange, darkly philosophical conversations you have with people you meet along the journey. At the same time, its cast, setting and systems feel fresh. Fresh next to Planescape: Torment, and fresh next to the genre’s output in 2017.

You are The Last Castoff, once the vessel for an ancient and immortal being able to transplant his consciousness from one meatsack to the next. Trouble is, so were a lot of other people. Unbeknown to your god-parasite (who’s male in this story, though you choose your own character’s gender) every time he hopped from one vessel to the next he left that castoff being with its own consciousness, and a lot of questions.

You can draw parallels with Planescape: Torment here if you want to underline the similarity angle, and I do, because in that game you played the opposite: an immortal being who unknowingly sacrificed souls to fuel his own resurrection. The experience of playing these two characters is broadly similar: you’re confused and isolated, in search of answers about your nature and identity. But the implications are vastly different. 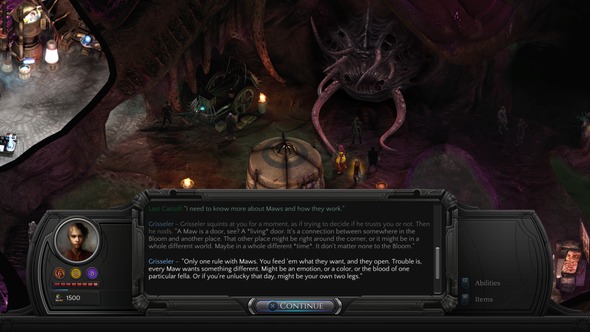 I begin my playthrough within The Bloom, a city-sized organism full of fleshy tunnels, pustules and tentacled maws, whose interior vastness houses an actual populated city. Understandably, The Last Castoff and her pals aren’t content to sit out the rest of eternity within its fleshy walls, so first on the order of business is talking to a heavily defended leader about getting out.

Actually, first on the order of business is getting to know my party a bit, since I’m starting the playthrough several hours into the game. Their personalities are quickly recognisable and clearly defined: Erritis is the light entertainment, just as Morte was in the last game. Matkina is a cold and slightly unnerving woman with whom Erritis seems quite taken. Callistege – well, she’s less clearly defined. Literally. She’s several different incarnations of herself at once, an experimental entity pulled together from different planes of existence. She’s quite chatty, considering.

Taking my first tentative steps along the fleshy tunnels of The Bloom, I stumble upon one of Tides of Numenera’s new systems: Effort. When you’re performing an action in-game but within the text box – something bespoke like interacting with a unique object – you might be presented with a set of nodes and asked to spend a number of them to increase your chances of succeeding in a particular task. 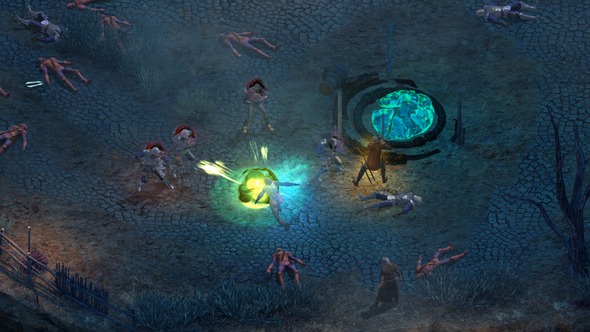 “These are translations of what happens in the new tabletop setting,” McComb explains. “Essentially we have difficult tasks of varying degrees. Essentially, you’re saying, ‘Okay, how important is it to me to succeed at this thing?’, and so you apply points of Effort. Depending on what tier or what level you are, [and] you can put more points into it. These are resource pools that are replenishable, but you have to rest, and when you rest, time moves on.”

Possible actions that require a certain number of effort points to guarantee success might not stick around forever, is what McComb implies. There’s a secondary system within that, too: Edge. “Edge essentially just gives you a free point or two points, or three points,” says McComb. “Free effort. You’re like, “Okay, I’m gonna spend three effort on something, but I’ve got two Edge”, so it’ll cost you one point of effort.”

Like so much of Tides of Numenera, it’s designed to slow the pace of gameplay down to a more thoughtful, calculated cadence. Pillars of Eternity offered something similar in its descriptive prose, in which you could choose to use certain inventory items or perform actions based on character stats, but this is a more dynamic system. 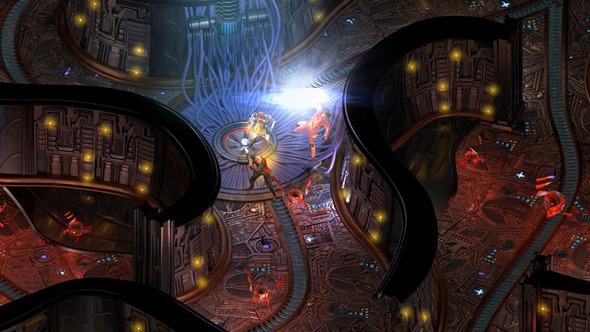 In my case, I choose to guarantee success while reaching into a mysterious statue to grab an object which feels like it doesn’t belong there. After doing so, my Last Castoff is sent swimming through the fragmented memories of others, trying to sort through their pain and anguish and make sense of it. Again, this is a very Torment principle: dealing with the metaphysical through extended interactive prose passages for tangible rewards in narrative and character progression.

That might not sound like a whole bunch of fun. And in less capable hands, it wouldn’t be – Tides of Numenera lives and dies on the quality of its writing, and in a two-hour chunk of hands-on I found that writing held my attention with a vice-grip. You do have to make a conscious effort to stretch your attention span with this genre, because it’s almost entirely comprised of reading text, but once you do you’re rewarded by playing a more active role in every character and room description. The isometric perspective only casts so much detail on the world, so InXile’s words, and your imagination, fill in the blanks.

It’s while I’m asking about the process of writing that world in such granular detail that McComb and lead writer Gavin Jurgens-Fhyrie get to talking about the Genital Naming system, or GNS. “We didn’t want any characters to feel the same,” says Jurgens-Fhyrie. “You’ll feel the same way once you play through this game, you’ll see that a lot of the characters are unique and odd.” 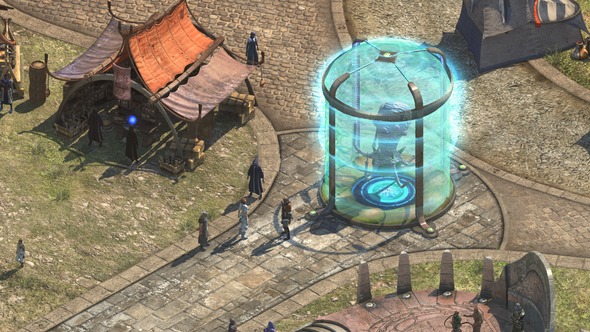 “One character [in particular], his line, I think it was, ‘Grim and weathered visage – it looks like he has lots of tales to tell’. I was like, ‘Colin, I think I’m gonna have to tell a lot of tales in this one’. He tells a lot of damn tales. So we started talking, and as we do when we talk, we inevitably skew dirty. So started on/talking about his ‘grim, weathered pecker’.

“So we were like, ‘Is he really a pecker talker?’” says McComb. “Then we realised: wait a second. If he calls it his pecker, what does his companion call his dick? The way one talks about their genitalia, the pair realised, is a real window into the psyche.

In other words: they’ve got the writing covered. It’s in safe hands. What about the combat, though? In truth I didn’t exchange a single blow with anyone in two hours, which is as telling in and of itself as this trailer InXile releases to explain Tides of Numenera’s turn-based mechanics.

It appears combat and the Effort system are closely linked, in that failure to put in the required Effort often leads to a combat outcome. So you could say I just grafted my way to a pacifist playthrough. I’m glad there’s such room for varying approaches, though: fighting was one of the less imaginative elements in the 1999 game and owed more to Infinity Engine stablemate Baldur’s Gate than the Planescape universe itself.

2017 is looking like a vintage year, almost of late nineties calibre, when it comes to isometric RPGs. But is the genre merely enjoying a bubble created by a fleeting nostalgia, or is it here to stay? “I certainly hope so,” says McComb. “I’ve really enjoyed doing writing-focused, story-focused, character-focused games.”

As for whether the principles of the genre might be applied to modern RPGs with their visual splendour, Jurgens-Fhyrie doesn’t see much cross-pollenation happening: “ I think the challenge is always that you’re gonna run into games that have become more advanced, where the game design itself is going to contradict that level of writing. With isometric, there’s just something about it that makes you want to sit down and read more. When you’re playing a [game like] Skyrim, for example, there’s something about it that gives you more urgency, so it’s harder to focus on the writing.”

Torment: Tides on Numenera releases on PC this February 28.