There was a moment in my third game of Total War: Arena that I fell in love. At the start of the game one of our players had drawn a big, big arrow down the centre. Then one had drawn an elaborate, unusually hairy dong down the map screen, the tip pointing right up the enemy’s flank. It was a sophisticated plan, I think. Bait the red team into overextending, then cut their archers down before closing the escape.

The reds fell into our trap. Pikemen held the forest while light infantry charged around the side. It was merciless. A wave of remorseless militia clad in white, stabbing and sticking and stabbing again. 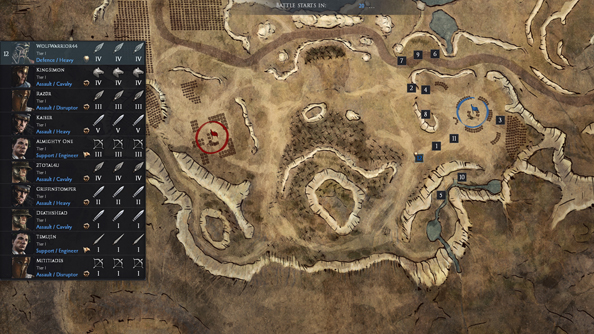 I, too, rolled my eyes when I first heard about Total War: Arena. Did we really need a Total War flavoured MOBA? It turns out, we didn’t. Arena isn’t another MOBA. It’s closer to World of Tanks, but with legs.

It has more players for a start: battles are 10v10. It has more units, too: everyone is responsible for three little troupes of historical pikemen, archers or cavalry. It doesn’t do in-game levelling: all your units are upgraded between matches.

Games are fast paced: units sprint everywhere and the maps are small enough to encourage quick engagements. But that doesn’t make them any less tactical: it’s clear that even a simple plan, if players stick to it, will usually succeed. The skills you’ve built in Total War work: picking flanks, charging and retreating, and the rock/paper/scissors relationships between infantry, cavalry and archers are in place. The game’s bigger and more impressive somehow – with each unit being micromanaged there’s just way more going on. 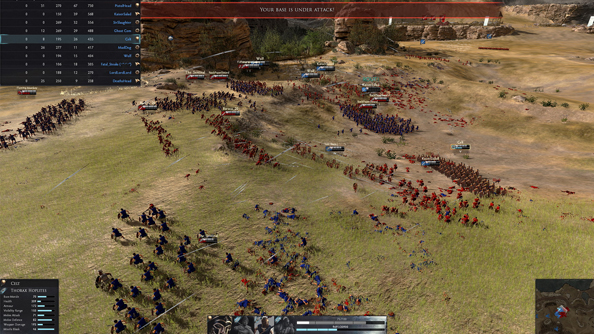 The maps are intricate and quite lovely: there are mountain passes to be captured and held, plains to charge over and rivers to ford or hold. They tell a story: in the centre of the newly launched Germania there’s a ruined and still smouldering central forest, the trees reduced to burning stumps.

It’s technically impressive too. Even in the heat of the largest battles, I didn’t see a hint of slowdown. Total War has always been a system hog, yet here, you can throw hundreds of units at each-other and the engine just shrugs off the challenge.

If I have a criticism, it is that the between match interface is dramatically overcomplicated. There are three types of currency, and part of your upgrade strategy is deciding how and what to convert. Units are upgraded via a very, very detailed tech tree, but it’s not clear how you progress upwards, or whether you should start with a different commander and set of units. Each unit can earn special abilities, like shield blocks or morale boosts that are activated on cool-down, which feels maybe a little videogamey, but I can forgive it. Changing the course of an engagement battle with a well-timed shield bash, and your team-mate charging a group of cavalry into the downed enemy is quite quite the thing. 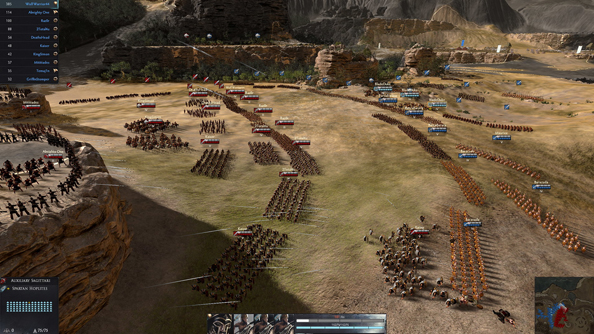 Last little anecdote. We’d been caught in a difficult situation; the bulk of our army was engaged on the flanks while the enemy was charging forward. We’d left a few hoplites to hold the base, but they were massively outnumbered.

Usually, this would feel like game over. In a game with ten players, it would surely dissolve into chaos and chat room abuse.

But as one, without anyone saying a word, our team fell back to some natural chokepoints, sacrificing a few lost causes in the hope of just holding the line. It worked: redeploying just across a riverbed gave our archers cover and left the enemy bogged down. I made an actual fist-pump and everything.

I really, really like Total War: Arena. I think it’s the smartest thing Creative Assembly have made in a long, long time. I can see myself playing it well into the future.

Total War: Arena is in beta. You can sign up for a chance to play it at the Arena site.