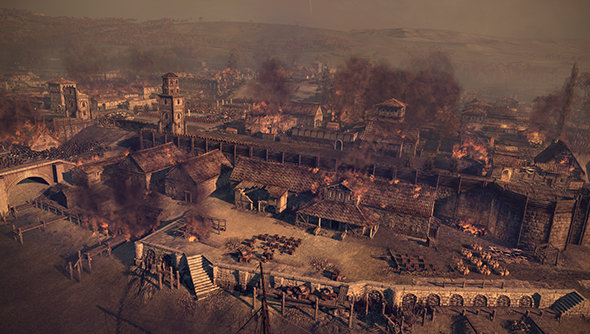 There’s a million-strong Mongol horde, too, about to mount a Barbarian Invasion, but I think climate change is the key issue.

Attila continues the Total War series’ blend of turn-based grand strategy campaign and real-time strategy battles. You’ll spend half your time directing a war while looking at a pan-continental campaign map, recruiting armies, brokering peace treaties, and fostering cities; the rest of your time you’ll be commanding your armies in the battles you start in the campaign mode.

Rome 2 charted the rise of the Roman Empire, tasking you with taking a small clutch of territories and, with them, conquering mainland Europe and North Africa; Total War: Attila puts you in charge of that empire at its fall.

Events of the main campaign kick off in 395 AD. “The dominant force in Europe is still Rome but it’s become so colossal and so bloated it’s impossible to manage from a single administration so it’s been split in two, the Western Roman Empire and the Eastern Roman Empire,” Creative Assembly’s communications manager, Al Bickham explains. “Together those two empires control the most vast quantity of land – from England right the way over to Syria.” 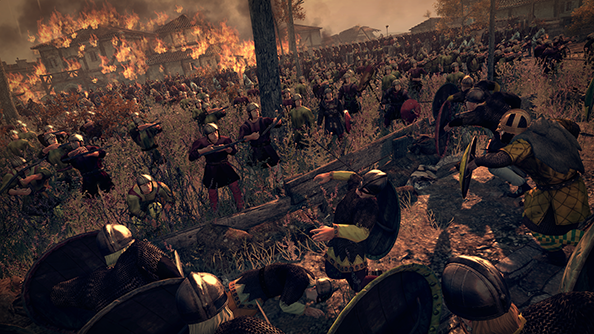 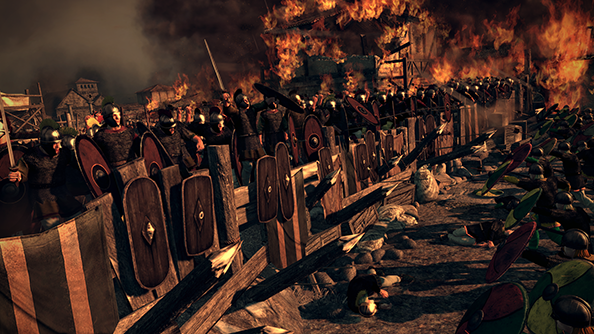 You take control of one of those huge factions right from the start. It’s the first time Creative have given you anything other than a few territories at the beginning of a campaign and, far from making things easier, it sets you up for a whole new challenge.

Your borders are huge, your enemies numerous, and your armies too few. “Right out the gates it’s a real challenge,” Bickham tells me. “It’s survival strategy, you have to work out what you can afford to lose to consolidate and fight from a position of strength.”

To the north west your armies are being attacked by the Picts and the Scots, your northern border is being tested by the goths, to the south the African factions are taking back land, and to the east Attila is massing his troops to sweep into Europe.

On top of that winter is coming. 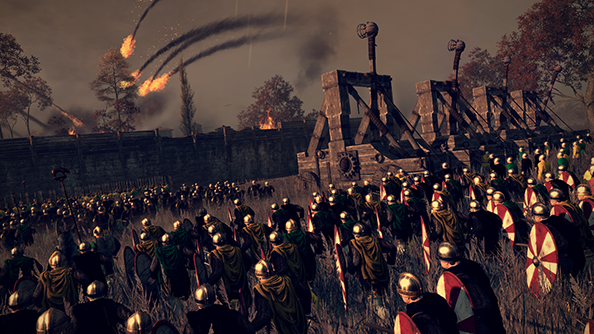 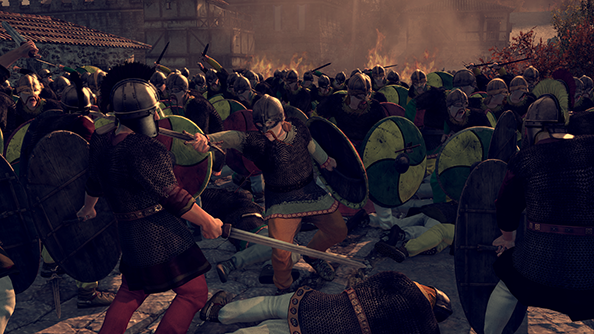 The key to Attila’s campaign isn’t the eponymous warlord, his is essentially just another army – granted a very big one but, on paper, nothing we haven’t seen before in the Total War games – it’s the new climate change mechanic. As the years pass in the campaign Europe begins to get colder, the winters get longer, and they start to take a toll on the continent’s northern regions. The colder territories get the less productive they become. Factions based in the cold north will begin to starve if they stay, they have to migrate south to survive. This means that as the campaign draws on the northern factions start to push south harder and harder, increasing the pressure on your borders.

It’s a simple mechanic but it should give new life to the latter part of Attila’s campaign. Stagnation has always been a problem in Total War campaigns. There comes a tipping point when you’re just mopping up the armies that are left. With this increased pressure and changing landscape it should be much harder to get into a position to dominate the other factions. 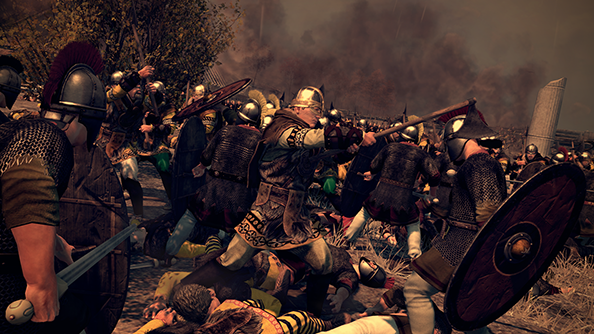 Disease is another factor you’ll have to take into consideration. Cities without sanitation can now become incubators for all kinds of infectious pestilence. Sick populations are less productive and suffering armies can be brought to a halt by illness, or, if their numbers have been severely depleted in battle, even wiped out by a disease. The illnesses can spread fast, too. Armies staying in a disease-ridden city can become carriers, spreading illness to other cities and armies. Trade routes can spread the infection, too.

These new features make the campaign map alive in a way it’s never been before, forcing you to react to northern incursions, set up quarantines, and deal with winter famines. 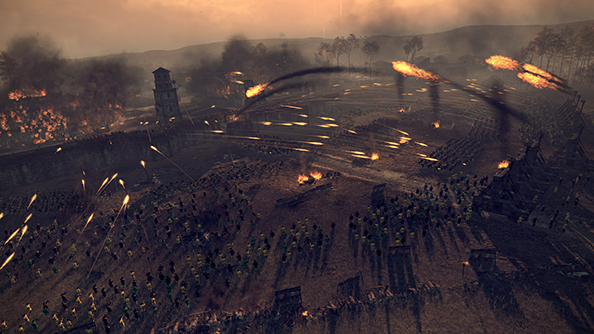 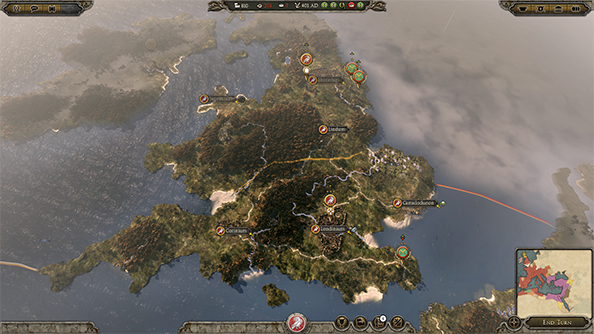 Attila sees sieges become a more necessary part of conquest but also makes them far more costly. To encourage sieges, cities have become more defensible. Defenders can deploy barricades that let them funnel invading troops down streets into choke points. So assaulting a city at full strength will require a very large army and siege weapons. However, if you besiege a city with each passing turn damage is done to the city’s defenses. So, if you siege a city for a couple of turns before making your assault then you might find breached walls, fewer barricade points, and a weakened defense with lower morale.

There’s another, more unpredictable factor to city battles: fire. Dynamic fires can now spread through a city during a battle, destroying whole sections of a town and burning any soldiers caught in the blaze. Flaming arrows and artillery can start an inferno that can swing a battle in either armies’ favour. 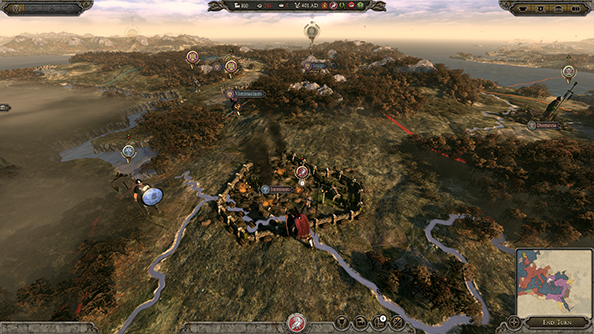 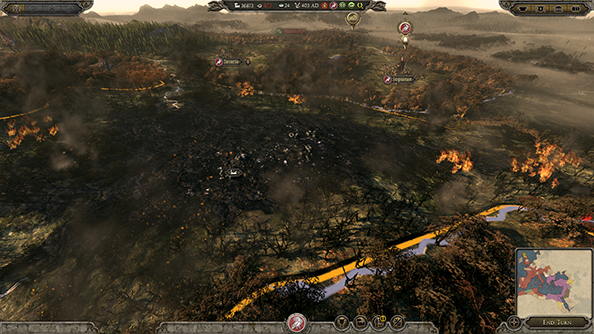 Creative have also increased the cities’ base supplies so sieges now last longer, making you second guess committing armies to attack because it could keep them locked in attrition for as many as eight turns, giving your opponent time to rally reinforcements to come and break your assault.

Expansion will be a harder struggle than ever, while defence is made easier, meaning campaigns will be long, bitter struggles to dominance. Keeping the Roman Empire together in the face of a changing climate, disease, and assaults from all sides is going to be one of the most difficult challenges Total War fans will have ever faced.

Total War: Attila’s release date’s still under wraps but I can’t wait to take on the Hun.