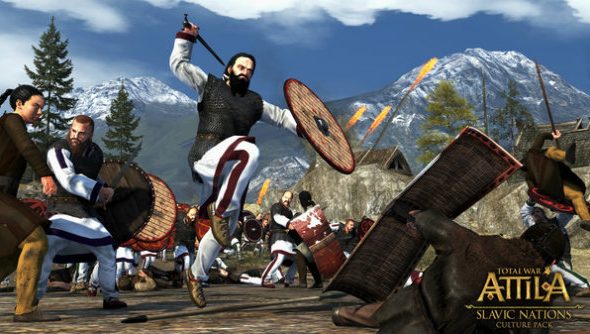 The Slavic Nations Culture DLC Pack is available from today for Total War: Attila, along with a patch and a freebie.

The Total War games are great for getting your strategy fix, there’s even one of them in our list of the best strategy games on PC. Can you guess which?

“A hardy and mobile people, often seen as the last defence against the Huns, the Slavs range far and wide across the blasted Steppe to recolonise and bring new life to the abandoned earth,” says the press release. “When conflict occurs, they release withering hails of poison arrows on their foes. Whether through diplomacy or conflict, they offer the perfect counter to the Hunnic threat, and introduce a number of unique ways to play Total War: Attila in both Campaign and Battle.”

A new patch is heading to Total War: Attila owners along with the launch of the DLC, and owners of the base game will also get access to a fourth faction, the Garamantes, for free. “In the dying light of the 4th century, the Garamantians occupy a unique position,” says the official blurb. “From their north African strongholds, they can attack the now-troubled Roman Empire, forging their own path in the west, or strike out into the seas to explore the unknown. The world is changing, yet the Garamantians are poised to seize greatness no matter what!”

The Slavic Nations Culture Pack is available now for £5.99 on Steam.