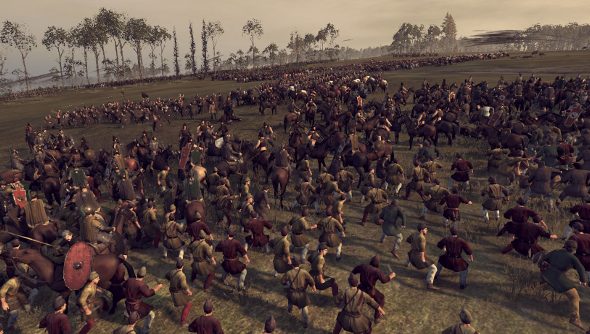 Sega are holding a massive sale on Creative Assembly’s Total War games. For one weekend only, Total War games are slashed by up to 75% off. Not only that, but many Total War games are free to play for the weekend, letting players try out the battlefields of various historical conflicts before they decide which one to commit to.

Also, Creative Assembly have released the original Shogun: Total War and Medieval: Total War on Steam for both £6.99. Time for a trip to the past.

On offer is Shogun 2, Fall of the Samurai, Empire, Rome 2, and Attila. Total War: Attila is discounted by 33%, but the others are available at 75% off.

In addition, every DLC pack is available at 50% off for some half-price bargain action.

For Total War: Attila players, the Last Roman Campaign pack is now also available for £9.99/$14.99. If you don’t have much money to spare, you can rest easy in the knowledge that a free DLC is also available, Vengeance of the Suebi, featuring the Suebi as a new playable faction, a new historical battle, and a slew of gameplay, balance and performance improvements.

But that’s not all. For the first time, the original Shogun: Total War and Medieval: Total War are both on Steam, and ready to download and play today. They’re both available in their Gold Editions, which means they come packed full with all the DLC content available. While they’re not part of the sale, they’re a measly £6.99 to pick up.

The deals are on offer until Sunday, 28th of June at 6pm BST, so make sure you remember to pick up a game if you enjoy its free weekend. And if nothing else, you can always just download the games you’ve not played for a free weekend of strategic invasions and diplomacy.