As has been said many times, Total War: Rome II is much improved from its infamously rocky launch. Perhaps this explains why developers Creative Assembly chose to add more campaign DLC to Rome II rather than Attila or Shogun II – it is a cunning way to draw people back to their flagship series’s most maligned recent entry. I had not played Rome II since launch and never really felt like I got my money’s worth out of it, so I was excited to return, not only to try the Empire Divided DLC, but to see just how far the game has come in other respects.

If you aren’t sure whether to splurge on DLC for a four-year old game, the good news is that some of its systemic changes will be available through the free ‘Power and Politics’ patch. Political parties now control provinces within your empire, and their loyalty to your rule can change – disappoint them enough and they’ll secede, taking these provinces with them. This adds a weighty sense of consequence to Rome II’s political system.

Though owners of the base game can enjoy these new features for free in most of its campaigns, Empire Divided provides purchasers with the perfect scenario in which to do so – it’s a big, tumultuous cauldron, whose bubbling ingredients are a splintering Roman Empire, ascendant rival powers, and hungry barbarian hordes. It also stirs in plagues, banditry, and cults, which are notavailable in Power and Politics.

Five overarching cultures are split into ten playable factions. The Divided Roman Empire, for instance, includes Gallic Rome, plain-flavoured Rome, and Palmyra. Each begins the game with a generous but vulnerable chunk of the former empire, and a big diplomatic penalty with their rivals. 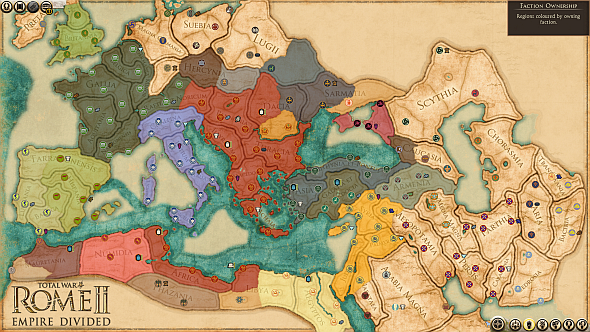 After several minutes of calculation, I opt for Gallic Rome, who hold most of modern France (as you would expect). Their whole eastern border is shared with belligerent barbarians and bitter Roman Pretenders, but their other neighbours are peaceful client states, leading me to conclude that they will offer a good balance of territory and defensibility (the Sassanid Persians are also in a strong position, but their campaign is rated ‘easy’, so they are clearly out).

As it happens, it is pretty hard to avoid some early losses even as Gallic Rome. I begin at war with the Francii and the Alemanni in Europe, the Roman Pretenders in Italy, and ready-salted Rome further afield. I have three medium-sized armies in the south of my empire with which to fend them all off. Within the first ten turns, the Francii take two vulnerable cities in the north while the Roman Pretenders capture valuable Massilia in the south. 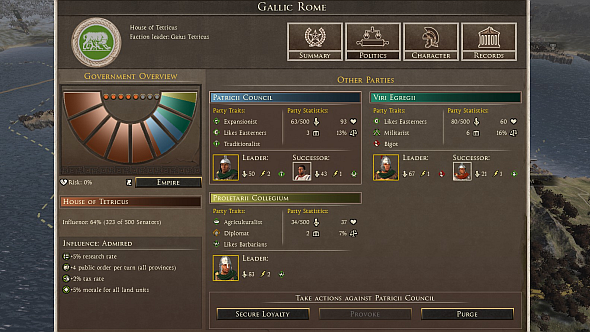 Calling it a warm up, and reckoning that it is not save-scamming if I restart the whole game, I restart the whole game. I force-march an army to my border with the Francii, and am able to make peace. I trust them to keep to the deal for now and march south to double-team the Alemanni. My third army has been mustering troops near Massilia, so the Roman Pretenders instead slip through a mountain pass to take Octoduris, a lesser town. It is one of several smart moves that the AI has made in these early turns, but this impression is undermined a little later when, as Rome classic, it pulls a reinforcing army away from a city I was besieging, enabling me to take it.

Comfortable with my progress elsewhere, I accept the loss of Octoduris and open the politics menu to peruse the new system. I do this in both of my games, so I notice that the two major political parties of Gallic Rome other than my own – the Patricii Council and the Viri Egregii – have different traits each time. In the first game, they had completely inverse attitudes to barbarians, which probably would have caused problems with one of them in the longer term no matter how I played. 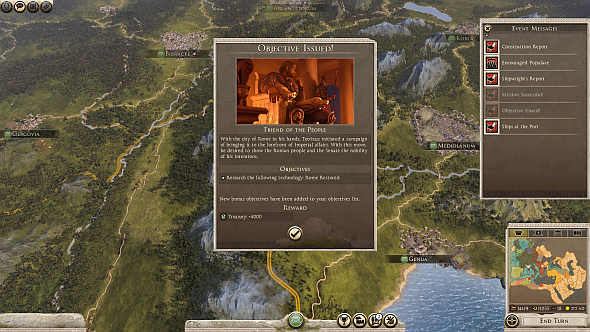 I might have welcomed that, however – I have found politics fairly easy to manage so far, but that is probably because I am only playing on Normal, and because political challenges feel weighted to the endgame.

A party’s loyalty is a function of their traits, your response to political events, and actions on the campaign map. I can well imagine that losing more battles thanks to tougher difficulties, plus a less favourable mix of party traits, could pose some really interesting problems. As it is, my campaigns against vanilla Rome and Palmyra are going rather well, and I’ve plenty of influence (in the form of senators) to spend in recruiting new characters from my own party. This ensures a rival won’t get mad at me if I get their favoured son killed or leave him sitting in a garrison.

More excitingly, I did have a prominent general break off from my house and start his own political party, taking a big chunk of my influence in the Senate with him. If this happens again, it is only a matter of time before there are enough traits in the Senate that you are bound to piss someone off. Party loyalty also declines as your Imperium level rises, so by the time the world is once again under your thumb, you will be struggling to stop it falling apart from within. It is a rather elegant simulation of what actually happened to the Roman Empire. 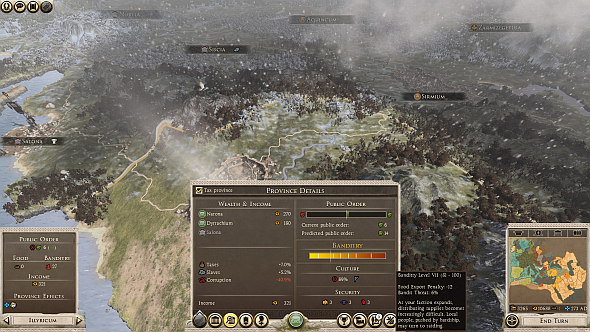 Empire Divided adds banditry and squalor. Squalor works more or less as it does in Attila: it will accumulate in your cities as they develop, and you must counteract it with sanitation buildings and technologies. For every point more squalor than sanitation in a settlement, there is a percentage chance of a disease breaking out in any given turn. Banditry is measured by province rather than by settlement, and will affect that province’s food exports, so it is crucial to keep it under control in your breadmaking territories. Just as squalor triggers diseases, so can banditry trigger bandit raids, which hamper a province’s output for several turns.

Controlling banditry and sanitation really puts pressure on your building slots, especially in settlements where you are limited to just the three. Building and tech trees have been overhauled for this DLC, but as Gallic Rome at least, my options felt deliberately limited: the Vigiles Urbani, a tier-two administration building, has the biggest impact on banditry, but will not eradicate it without at least two copies in a province. It is also unique to Rome. These mechanics seem balanced such that you will need to tolerate at least a few ruffians and sick people if you want your provinces to do anything else. 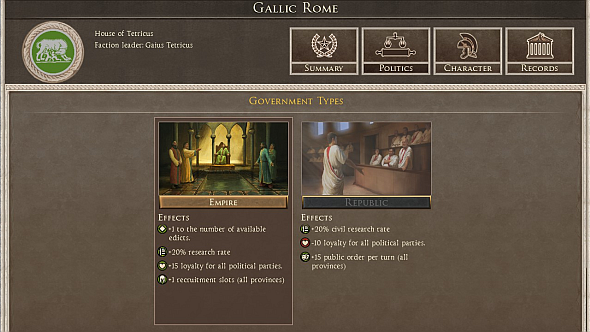 Speaking of sick people, Empire Divided allows you to invite cultists into your settlements, where they will build their own districts for free. The Christian cult gives a big sanitation boost (I guess they are community-spirited enough to pick up litter), but cults have downsides.Public order suffers if they share a province with another cult or religion, and they bring their own culture, which can have political consequences. In my case, the leader of the Viri Egregii party has given them the ‘bigot’ trait, meaning they lose loyalty for every province I control in which my own culture isn’t dominant.

There’s a big spike in squalor and food demands when I hit third-tier buildings, but by then I’m in reach of a technology – Communal Rubbish Collection – that adds +7 sanitation to all regions. There’s an equally effective anti-banditry tech later on. Obviously these have to be weighed against other techs that might unlock new buildings or strengthen your forces, so even though you have the tools to manage these problems, prioritising them is the challenge.

I enjoyed wrestling with these decisions, though the other options in the admin or cult building chains felt less tempting than wholly different chains, so I did feel nudged toward the Vigiles Urbani and Christian choices. The others feel more like situational or playstyle preferences, but that may be an inaccurate first impression – I can imagine that they enable different strategies. For instance, welcoming the Mithraeic cult helps your research rate, which should enable you to get Communal Rubbish Collection faster, so perhaps you can manage squalor in a different way. I will give that a try next time. 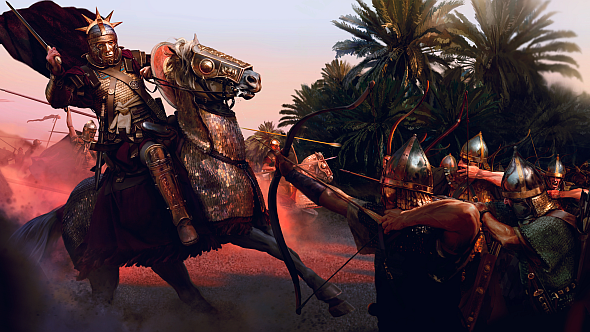 Because there will be a next time. Though I have been thoroughly enjoying Total War: Warhammer, the historical games still offer something special in simulating the action scenes in the story of our species. With this update, Rome II’s turbulent period reaches new heights of credibility; it is a much deeper empire management sim than Total War: Warhammer – even the treachery of the Skaven or the petty politicking of the High Elves does not compare to what is on offer here. (Although, if this cross-pollination of ideas continues – diseases have now spread from Attila to Warhammer and Rome II – perhaps we have not seen the last of political parties.)

If, like me, you remember the many stumbles Rome II made at launch – its interminable end-turn phases, poor optimisation, cool but unreadable unit cards, et cetera – then it is very pleasant simply to return after all the work that has been done. The Power and Politics patch is the apex of Rome II’s rehabilitation, and since it is free, it is a great excuse to return to history for anyone who owns the base game. If you like what you see, Empire Divided then shows it at its best.