When it was announced that Three Kingdoms’ next expansion would focus on the war between Cao Cao and Yuan Shao and the Battle of Guandu, I had one question: are they going to recreate that scene from the TV show? You know, the one where Cao Cao laughs in Yuan Shao’s face and then runs off waving his arms and snickering, like the pantomime villain he is?

I figured the answer would be no (fair enough: I’m pretty sure that never actually happened in The Romance of the Three Kingdoms novel), but even without it this new expansion has plenty of rich and enjoyable tools to play with. Fates Divided is in many ways the opposite of The Furious Wild: whereas that expansion gave us the vibrant, warlike factions of the Nanman, Fates Divided and its accompanying update enrich the game’s existing factions with more subtle, underhanded means of approaching problems.

Many of those factions are already pretty Machiavellian, and none more so than Cao Cao. His new ‘schemes’ mechanic enables him to spend his credibility to basically trick the game, or as a resource to swing diplomacy in his favour. Yuan Shao’s rework, on the other hand, is military minded, making captain retinues more useful by letting you upgrade them with lineage points.

But the line between expansion and update is blurry this time around. If you purchase Fates Divided, you get the 200CE start date for loads of different characters. But Cao Cao and Yuan Shao’s reworks, and the new tools that their campaigns utilise such as the Faction Council and Imperial Intrigue, are free for everyone. 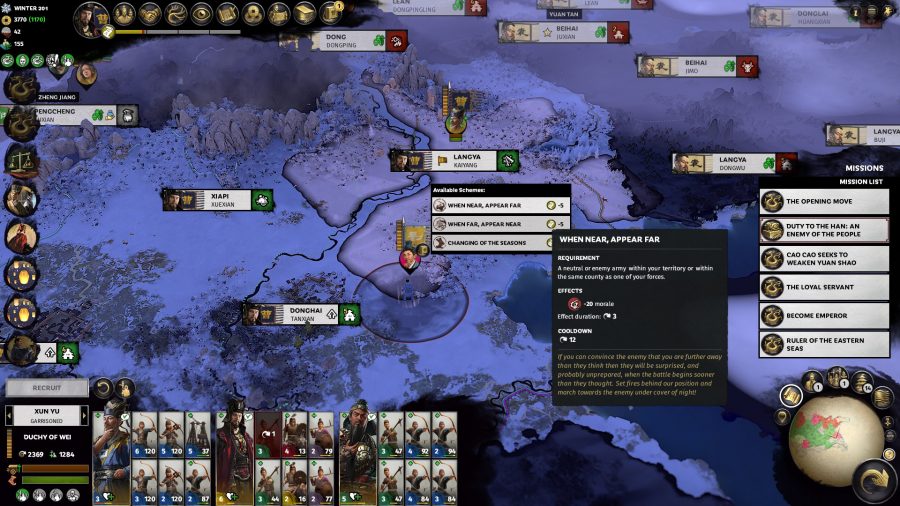 That adds a lot of depth to the existing game. Fates Divided’s value is in showing it at its best: those late-game start positions throw you into an advanced campaign map rich with diplomatic tension, exactly as if you’d started at 190CE and wound the clock forward ten years. Cao Cao, for instance, begins with a hefty crop of settlements and the emperor already under his sway, but he’s also surrounded by enemies who are nipping at his heels.

King in the North

The most significant new units in Fates Divided are the Northern Army, who ally themselves with whoever takes that region. Similarly to the Imperial Army in Mandate of Heaven, these units include elite spears, swordsmen, heavy cavalry, and horse archers.

It makes for an enjoyable albeit brief start to his campaign, as I complete missions dismantling Yuan Shao’s power base. It only takes me 30 turns to finish him and his allies off, but they are late-game turns, in which I’m fighting multiple battles per turn from the outset. It’s an exciting strategic knot to unravel, and as I’m outnumbered, it’s also the perfect opportunity for Cao Cao’s signature tricksy-ness.

Imperial Intrigue is the new mechanic that connects all Han factions and adds more value to capturing the emperor. You can use your imperial influence in diplomacy, but you can also declare someone an ‘enemy of the Han’, which makes other factions dislike them. When you combine this with Cao Cao’s schemes – which let you debuff armies, factions, or characters – and his ability to use integrity as a diplomatic resource, you can create a really hostile environment for your rival. That’s not even mentioning the reworked faction council either – a box of further schemes, like smearing rival contenders for emperor, that dynamically update according to your present challenges. 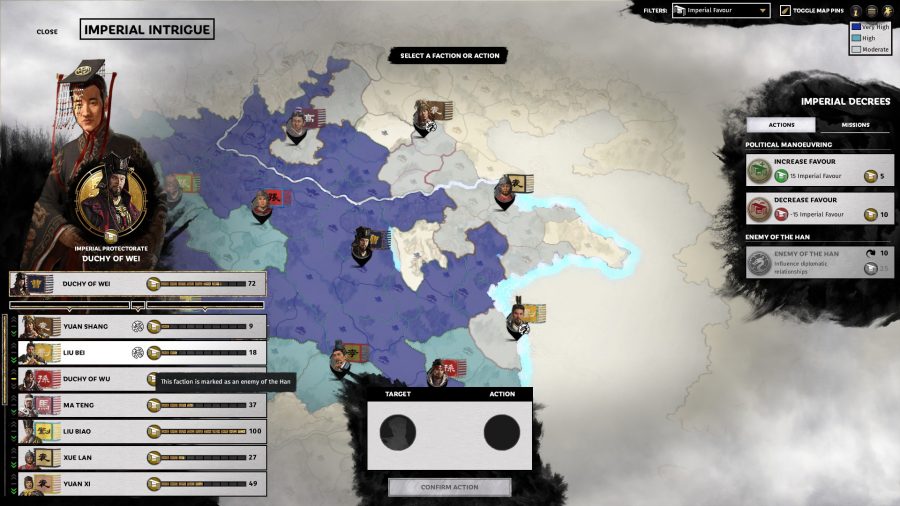 But for me, the true stars of Fates Divided are Liu Yan and Liu Zhang. This twosome represents the first cross-generational Total War campaign, as Liu Yan completes missions that allow his son, Liu Zhang, to activate powerful bonuses when he becomes leader.

Cao Cao and Yuan Shao may headline Fates Divided, but Liu Yan and his son are the best way to experience it and its update

This inheritance coupled with his food production bonus offer some fun possibilities for anyone interested in playing Total War without actually declaring any wars. It’s a logical corollary of Three Kingdoms’ greatly expanded diplomacy, and it’s nice to see Creative Assembly embrace this direction of travel – especially as so many other large-scale strategy games offer non-violent playstyles or victory conditions. Cao Cao and Yuan Shao may headline the Fates Divided art, but this fresh faction and its start position on the opposite side of China is a far more novel way to experience Three Kingdoms’ latest update. You can also play Liu Yan from 190CE, if you prefer to start with a less mature campaign map. 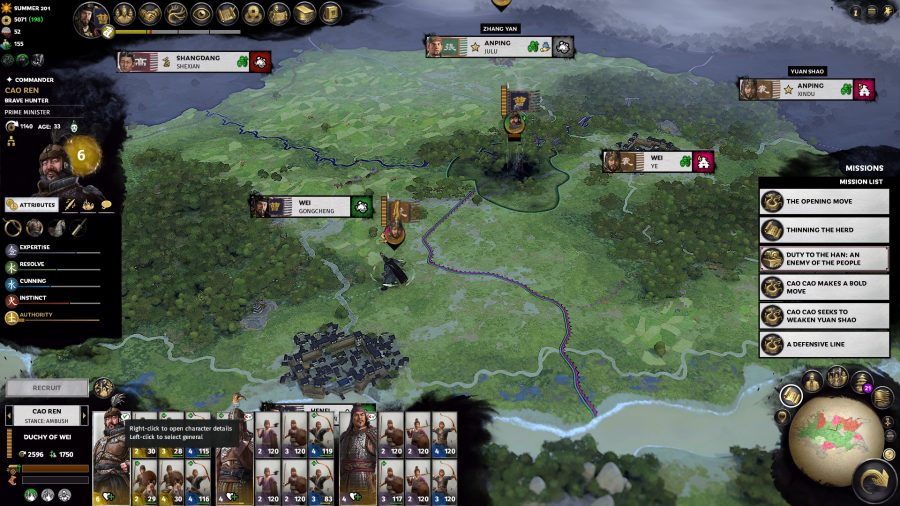 It’s nice, however, to see both Yuan Shao and Cao Cao get some of their more iconic hench-people. Both start their campaigns with an impressive roster of legendary generals, which is especially useful for Cao Cao, who has to lead armies on multiple war footings right from the outset. I found Zhang He to be a very powerful duelist and Cao Ren a handy horse archer commander.

Not sure where to start? See our list of the best Total War games

One thing that did surprise me in Fates Divided, though, considering the imagery in the trailer, is that I didn’t actually get to fight the Battle of Guandu during my Cao Cao campaign. I get that quest battles and fixed narrative points mess with Three Kingdoms’ campaigns, but by the same token, there isn’t a historical Battle of Guandu either. Hopefully it’ll get added for anyone who wants to learn a little more about the conflict. 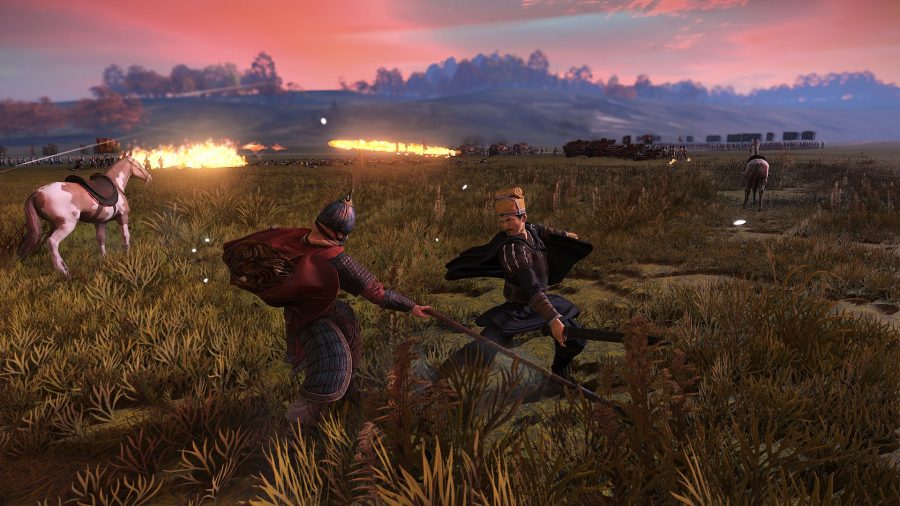 On the whole Fates Divided is another fun narrative beat along the ever-expanding Three Kingdoms timeline. In some ways it’s a little overshadowed by the depth of the free update accompanying it, but content is content, and Cao Cao and Yuan Shao’s 200CE campaigns are definitely the best way to experience their reworks. It’s also fun to see how the fates of other factions have progressed, such as Zheng Jiang’s new extremely tough – yet very fun – start position on Cao Cao’s doorstep.

So while Fates Divided isn’t as bombastic as Furious Wild – no flamethrowers or tigers here – it undoubtedly adds a lot more intricacy to Three Kingdoms, as well as some brilliant new and reworked campaigns through which to experience it.

Though slightly overshadowed by the depth of the accompanying free update, Fates Divided's new factions and late-game start positions are the ideal way to experience it.