I don’t think I’ve hated a videogame character more than Yuan Shao in Total War: Three Kingdoms. Half-Life 2’s Wallace Breen may have been arrogant; Far Cry 3’s Vaas Montenegro may have subjected me to cumulative hours of indulgent monologues. But neither of them, nor their PC gaming antagonist contemporaries, had the temerity to try to vassalise me every ten turns for hundreds of years.

My war with Yuan Shao has proven to be one of the more memorable Total War moments I’ve enjoyed in recent years. This newest title, breaking rank from both Creative Assembly’s historic Total War games and its mighty Warhammer cash cow, brings issues along with innovations, but its capacity for involving and engrossing campaigns remains very much intact.

Perhaps the most urgent information to impart is that this isn’t Dynasty Warriors Does Total War. Creative Assembly has been fairly transparent about its desire to coax in a greater Asian market share with the Three Kingdoms setting, but that doesn’t mean generals ride around slaughtering thousands of units like they did in their PS2 salad days. To that end, there are two distinct modes, Romance and Records, which affect each general’s overall ability and behaviour on the battlefield.

What the choice amounts to is one playstyle that’s similar to Total War: Warhammer, in which generals have special abilities capable of dealing huge damage and slaying dozens – notice I didn’t say thousands – of units around them, and in which units are less susceptible to tiredness. That’s the Romance mode. The Records mode is more rooted in history and so generals are more vulnerable and units get wheezy when you ask them to march the length of the battlefield. In neither mode does Total War: Three Kingdoms feel silly or lightweight. 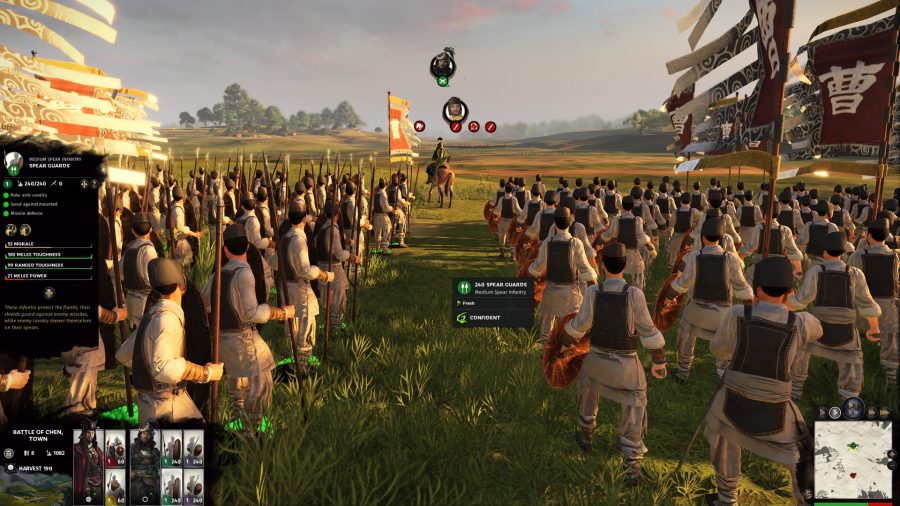 There are quite big changes in combat, however. Battlefields are bigger than in prior Total Wars, and in tandem with that, archers now have a larger range. Perhaps more capable players than I might see tangible benefits to that, but I find it simply makes battles longer. I’ve reached for the fast-forward button more often than in Total War: Warhammer, and that feels like a shame.

The only meaningful differentiation comes from the generals

In Romance mode, the addition of super-powered generals ought to expedite a conclusion. The option to send them in and duel with one another certainly adds an additional tactical wrinkle with victory yielding buffs for the rest of your army, and a pleasing display of Crouching Tiger Hidden Dragon melee combat taking place in the middle of the battlefield. Outside of duels though, Romance mode generals are a bit of a pain to manage or fight against. Too often, they’re lost in the soup of other units, and while you’re orchestrating a flank attack with your cavalry or carefully keeping your archers out of harm’s way, generals will either be decimating your infantry or being decimated by your opponent’s.

The last and most obvious meaningful change to Total War’s real-time battles is in the units themselves. In the olden days of historical Total War, you had to dig out the history books just to figure out what a given unit even did in battle, and how it should be used. To wield a throng of Yari Ashigaru properly, you had to first learn who on Earth the Yari Ashigaru were, at what range a Yari – a Japanese straight-headed spear, for those who skipped Shogun 1&2 – was effective, and in what sort of formation the Ashigaru were most effective against charging cavalry. You left those games feeling like some hybrid of a military historian and archaeologist, with such singular insight into the manner war was waged in that time and place that the details would stay with you for years. 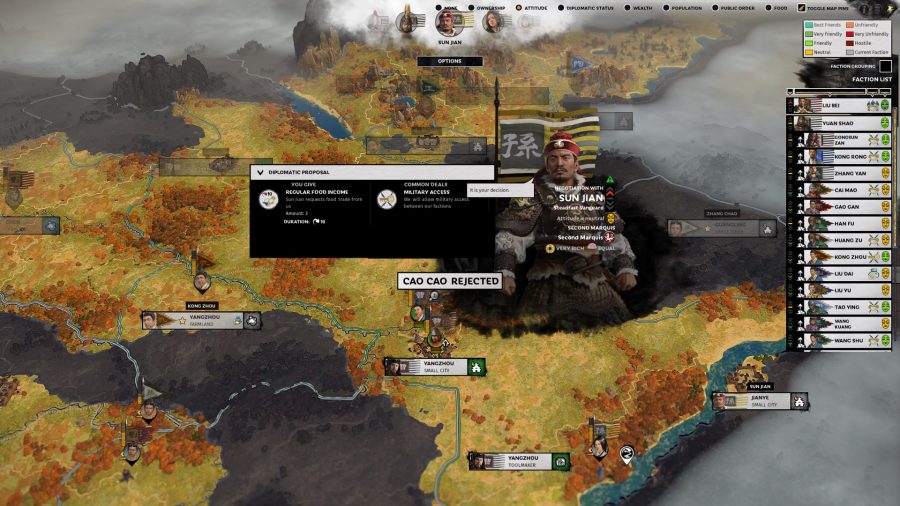 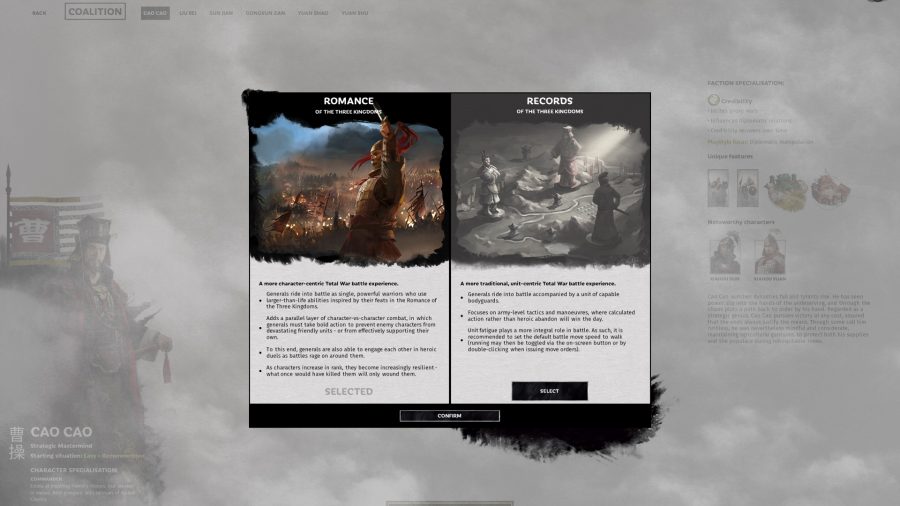 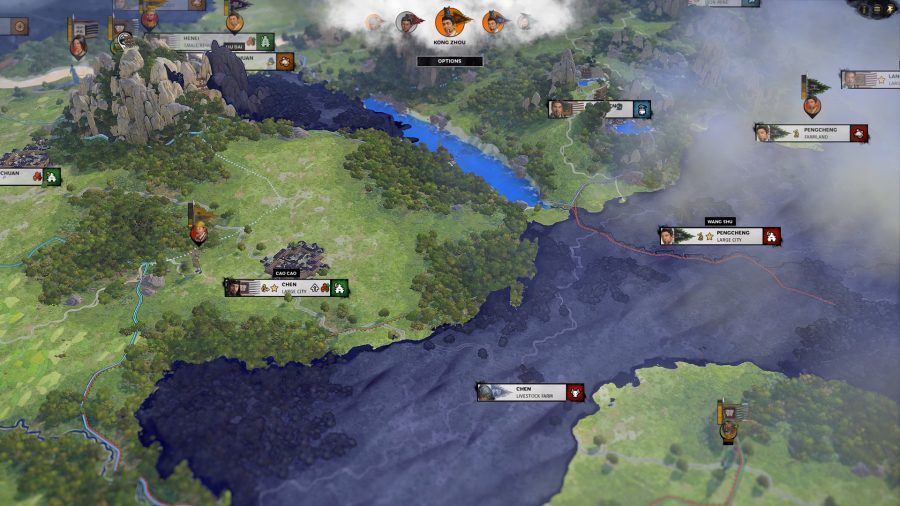 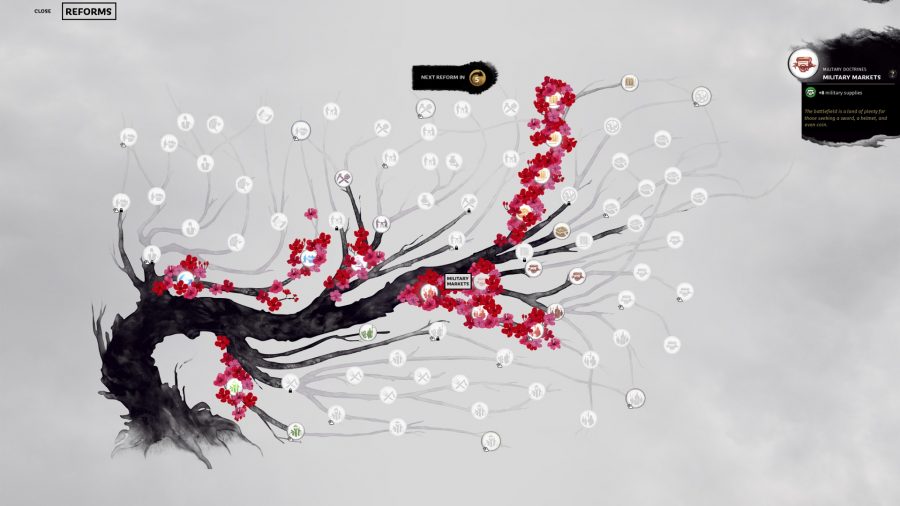 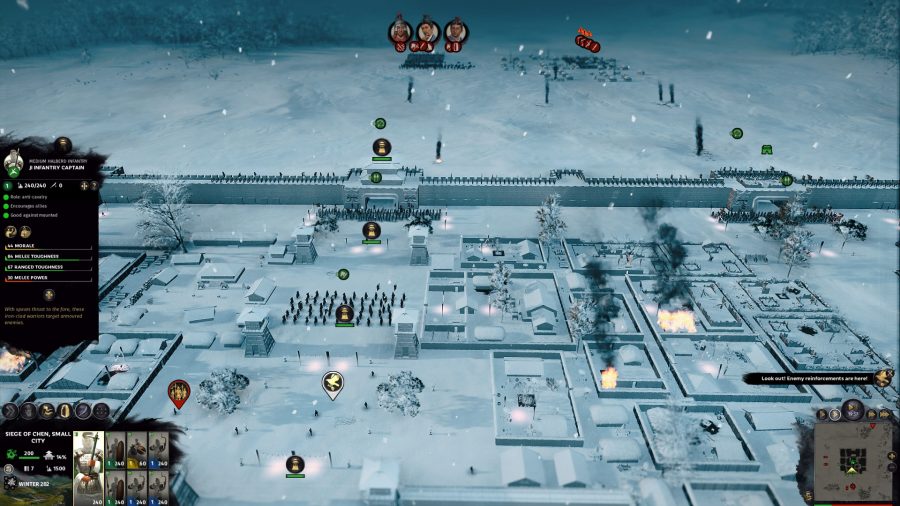 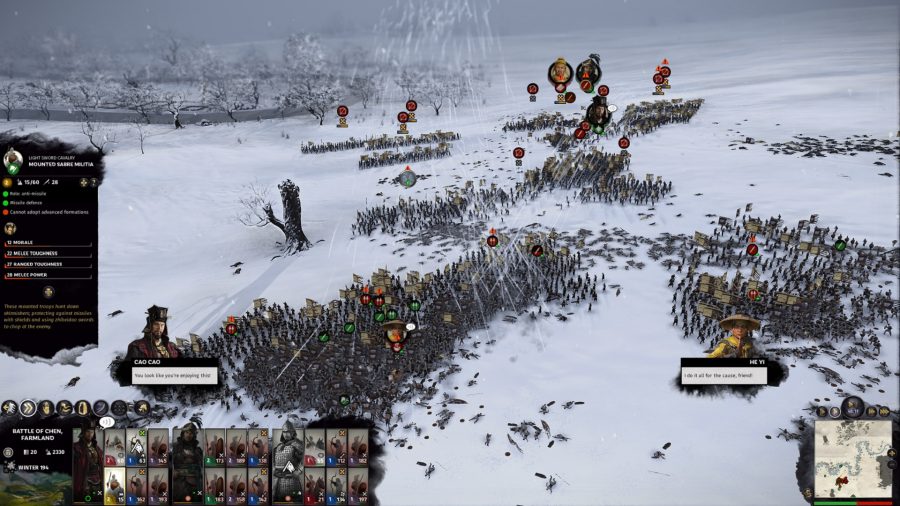 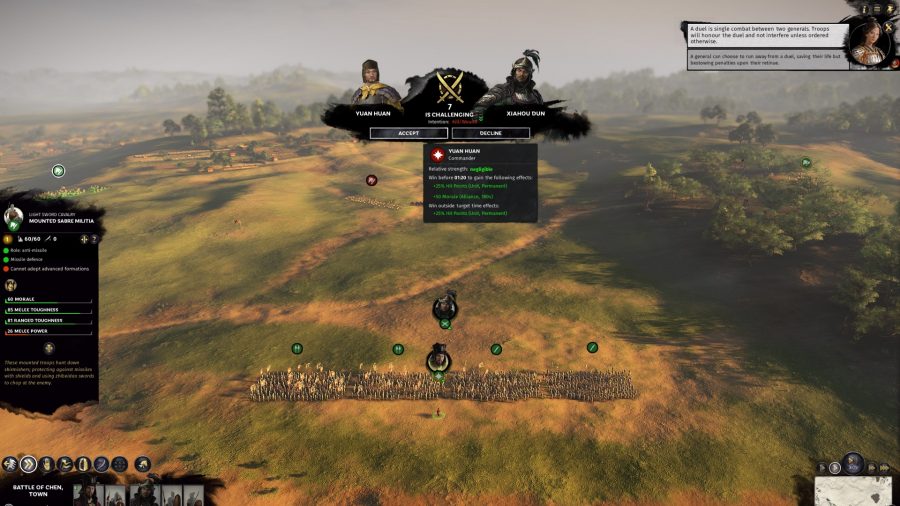 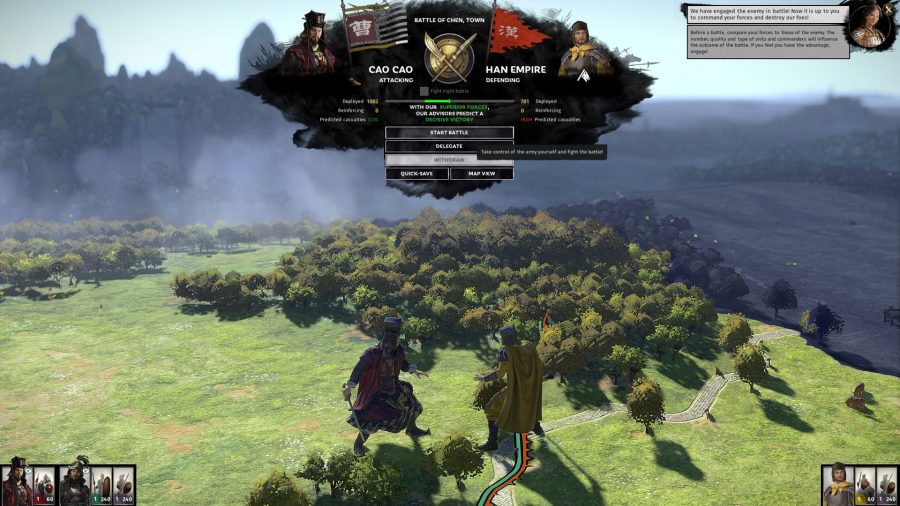 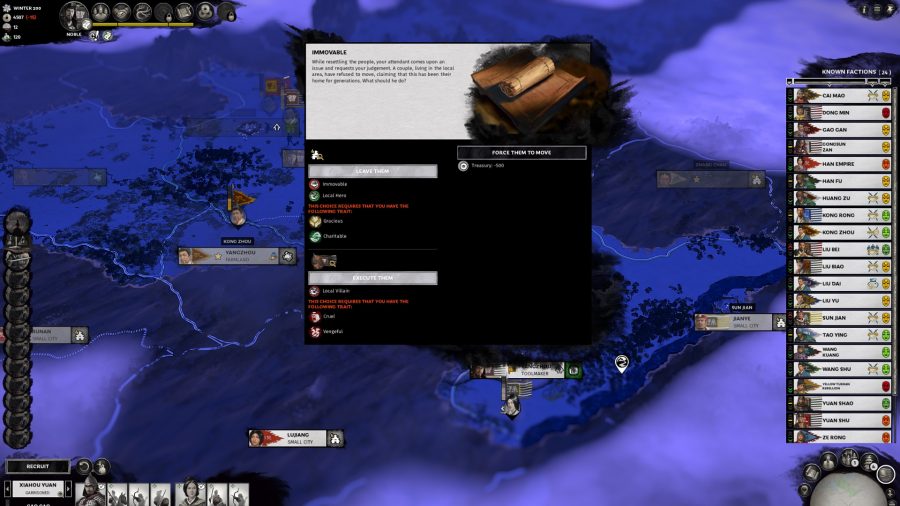 In Total War: Warhammer, too, time had to be spent with your race and faction, figuring out how to maximise Bretonnia’s cavalry-focused roster and what to do when you faced an army specifically built to counter cavalry – be annihilated, in my experience. It was the same rock, paper, scissors system that has underpinned Total War’s real-time battle engines since Shogun 1, and in fact, if you CRTL+F ‘rock, paper, scissors’ on any piece written about the franchise since its inception there’s a strong chance you’ll find it at least once. But the characters, strong visual identifiers, specialities, and unique units in higher level armies made Total War: Warhammer just as deep, if not quite as bookish, as previous historical games.

Total War: Three Kingdoms introduces dragons to the historical side of the series. Alright, not the mythical creatures of scale and wing. Sorry. The dragons are a new multi-role elite unit that arrive as the result of the game's Wu Xing elements.

That enormous aside exists to underline that this simply isn’t the case in Total War: Three Kingdoms. The historical depth isn’t there, and in the real-time battles specifically, the gap isn’t filled by anything with the same fascinating density. Later on, higher level units can be unlocked, but the armies of the 12 legendary warlords fighting for China are very similar: archers, swordsmen, cavalry, spears, pikemen. The only meaningful differentiation comes from the generals employed to lead those units, and they have all manner of far-reaching effects both in real-time and in the turn-based strategic layer. It’s just not quite the same as crafting a historically accurate army of units you know inside out, and who are bespoke from their enemies.

Real-time battles are just one side of the coin though. It’s a very different story in the turn-based layer, where the Three Kingdoms licence feels additive and the accompanying art direction, all painterly pastoral scenes and pop-up book prettiness, brings a new personality to the old framework. Most importantly, it’s where vendettas and alliances are forged, and it’s these that prove more memorable than any one skirmish. 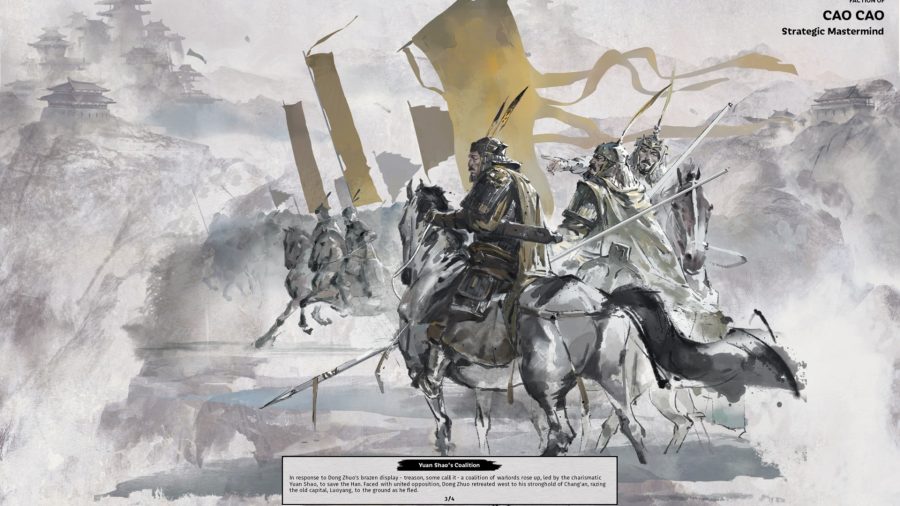 Which brings me back to Yuan Shao. We became enemies almost immediately during my first campaign as Cao Cao, after he capitalised on my waging war on the nearby Han Empire to unify Chen by marching in and taking a farm of mine. This happened within ten turns of the campaign on normal difficulty, mind you. Usually, Total War opponents are too busy trying to make nonsensical trades with you during this phase to take your territory, but nope. So long farmland, and so long having enough food to feed my fledgling empire.

I remedied the situation by making a few deals with Liu Bei to the east, unloading a few trade ancillaries for good favour and enough cash to build a decent army. Eventually, that friendship grew into a full-blown coalition, and Yuan Shao backed off when threatened by Liu Bei’s military force. Occasionally I caught the AI doing baffling and illogical things like marching to and fro between settlements for no clear reason, or coming to me with surprisingly generous trade offers. But generally they functioned believably, doing me no favours, and reacting appropriately to my diplomatic actions.

By turn 20, Yuan Shao had somehow managed to subordinate four or five smaller factions. This proved enormously irritating, but it also laid the foundation for a narrative I got engrossed in for many hours, and found myself thinking about in idle moments waiting for the kettle to boil. Those dependent states all but surrounded my territory, so in order to expand at all, I had to go to war with not one but five factions, take the territory I desired, then broker a peace agreement, lick my wounds and do it all again. Since my main ally Liu Bei had become enormously powerful in this time, I was able to keep falling on his military support to dissuade Yuan Shao from actively invading, although it cost me many trade ancillaries and a few military support pacts of my own to keep him sweet, let me tell you. 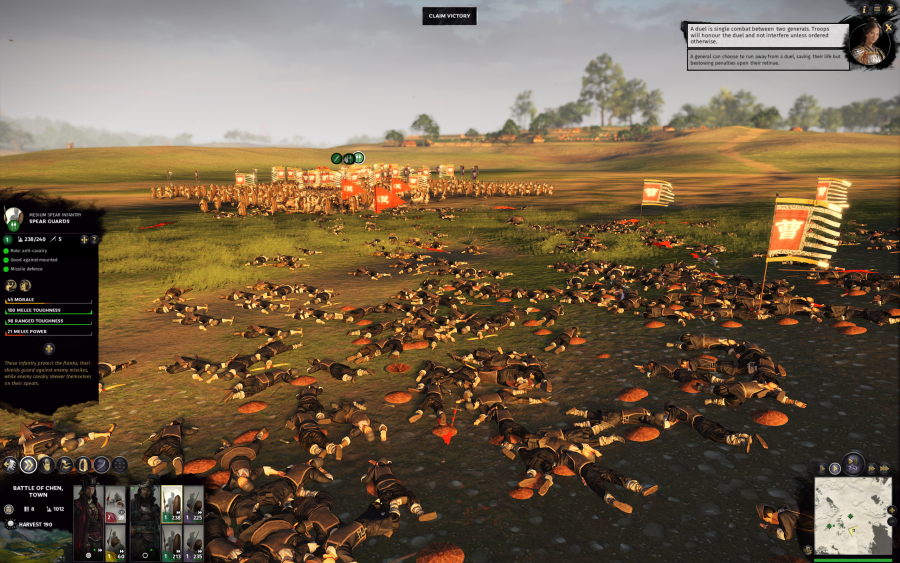 All the while, the added intricacies of the Total War: Three Kingdoms campaign throw curveballs at your plans, in many ways mimicking the overwhelmingly complex Paradox grand strategies driven by the Clausewitz Engine. Successions change diplomatic relationships, sometimes while you’re in the middle of a war with a faction and about to take their capital. One leader snuffs it, then – bam! Everything changes.

Generals, administrators, and others in your court have their own relationships to you and to each other, often throwing in a bit of spice to the mix like public order effects, bonuses to trade, population growth, or the like. But they don’t prove such a distraction as to totally undermine your grander plans or pull your attention away from what really matters. In my case: Yuan Shao.

Related: Take charge in the best strategy games on PC

I’m several hundred turns in now, and he and I are on roughly equal footing. He still holds two vassals, and although we’ve been at war for what must be decades, he still regularly offers me the chance to become a vassal state of his, in exchange for peace.

This is a game of such vastness and intricacy – not to mention such extensive DLC plans, no doubt – that it will be judged over months or years, rather than weeks. While that leaves reviewers such as myself to ponder the pointless little lives we’ve carved out for ourselves, the best we can do is keep playing it. And the most telling thing to be said about Total War: Three Kingdoms is that despite its faint disappointments in real-time battles, I am absolutely compelled to keep playing.

Changes on the battlefield don't make for a Total War experience to match historical and Warhammer entrants, but there's still a deeply involving strategic layer in Three Kingdoms that sits well with its licence.