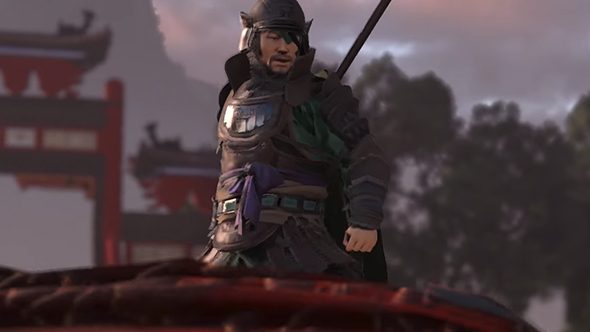 Total War: Three Kingdoms might not be out this year, but Creative Assembly is apologizing by way of some early E3 gameplay footage. The new video shows off an in-game battle game, with special attention toward how commanders and their abilities affect the flow combat.

This battle sees Cao Cao laying siege to a city held by Lu Bu. Trebuchets knock a hole in the city’s walls, with the legendary commander leading units through the razed defenses, while a heavy spear guard contingent – locked in turtle formation to protect against missile fire – assaults the main gate. We see other specialized units like the Azure Dragons, which serve as a hybrid between melee and ranged battlers, firing over walls until their ammo is depleted then joining the fight in melee.

Can’t wait to fill your strategic needs? Check out the best strategy games on PC.

Generals like Lu Bu have their own unique items, with our narrator specifically calling out his special horse and weapon. If you defeat him, of course, you can take those unique items as loot. Different generals can also recruit different types of units and, of course, they all have their own unique abilities and effects on the battlefield. Yue Jin, for example, is a guardian hero who works best in the midst of combat, able to serve as a tank and absorb damage from enemy units.

On the other hand, a strategist like Cao Cao is weak in melee battle, but offers powerful debuffs against enemy units, and his presence unlocks unique formation types for your own troops. The system sounds very much like the lords and heroes of Total War: Warhammer, which makes sense given how Romance of the Three Kingdoms, the game’s largest inspiration, places a heavy emphasis on the romanticized abilities of China’s historical legends.

New to Three Kingdoms are duels, which allow one hero to challenge another to single combat, which lasts until one of the fighters dies or retreats. If you’re confident one of your commanders can take out an enemy, this provides a useful to single them out and remove their abilities from the fight – plus it offers a terrific set of battle animations that look to be coming straight out of your favourite historical anime.

Check out the video above for a closer look at everything. Creative Assembly promises further details during E3, likely as part of a continuing video series showcasing new gameplay features. The Total War: Three Kingdoms release date was just pushed back to 2019, but so far it seems that the new tactical title is shaping up nicely.