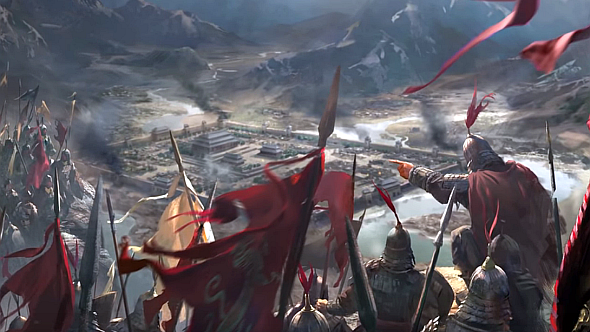 In Total War: Three Kingdoms, a settlement’s buildings will be viable targets during a siege. That means that you can initiate a siege, target and wreck say, a granary, and then retreat. The granary will now be destroyed on the campaign map, leaving the enemy deprived of its benefits.

That’s what Total War developer Creative Assembly told us during our hands-on demo at E3 this year. The trade-off for targeting buildings in this specific way, of course, is that if you later want to capture that city yourself, you’ll have to rebuild the granary.

For more cunning plans and sneaky tricks, check out the best strategy games on PC.

It’s an exciting innovation for the series and should add some new options to siegecraft – right now, if you don’t have the strength to take a city outright, slowly starving it into submission over often dozens of turns is your only option, and it’s a pretty boring one. If it’s possible to bombard key buildings from a safe distance with artillery, that potentially opens up whole new styles of play.

We know that each army can host three generals, each of which will unlock specific unit recruitment options. Early battle gameplay suggests that there is a general class who specialises in siegecraft – note the general bringing all the catapults (to the yard) at 1:29. A thing I might try: fill an army with generals of that class, and thus artillery, pummel anything I can target from beyond the walls, and retreat.

For more on Total War: Three Kingdoms, you can check out our E3 interview with Creative Assembly below.

The Total War: Three Kingdoms release date is pegged for some time in spring next year. For everything else we know so far about the famous series’ return to history – and we’re starting to learn some things of material importance – hit that link.