The Skaven are a sprawling race. Millions and millions of them live beneath the surface of the world in a collection of countless clans and burrows loosely termed the Under-Empire. But there’s one thing they all fear, from the lowliest clanrat to the Council of Thirteen – the assassins of Clan Eshin.

Essentially the Skaven boogeymen, they gained power through an understanding that ratmen will always seek to betray each other, and need someone else to handle the dirty work. Eshin capitalise on this habit by pitting clans against one other, yet remain forever aloof, surrounded in an aura of mystery. One of the most mysterious of their agents is Deathmaster Snikch, Chief Assassin of Clan Eshin and the newest Legendary Lord to grace Total War: Warhammer II with The Shadow and The Blade DLC.

If one thing makes Snikch stand above previous Skaven Lords, it’s his animations. You only need to watch one fight to see an acrobatic whirlwind of death, slicing through the enemy with his signature three-blade style: one in either hand, and one gripped in his tail.

“One of the principles of animation is that of overlapping action, that different parts of the body move at different rates,” explains Matthew Lewis, animator at Creative Assembly. “Snikch’s tail blade worked well with this principle as it accentuated his dynamic movements. Think of the way a gymnast uses a ribbon in rhythm gymnastics.” 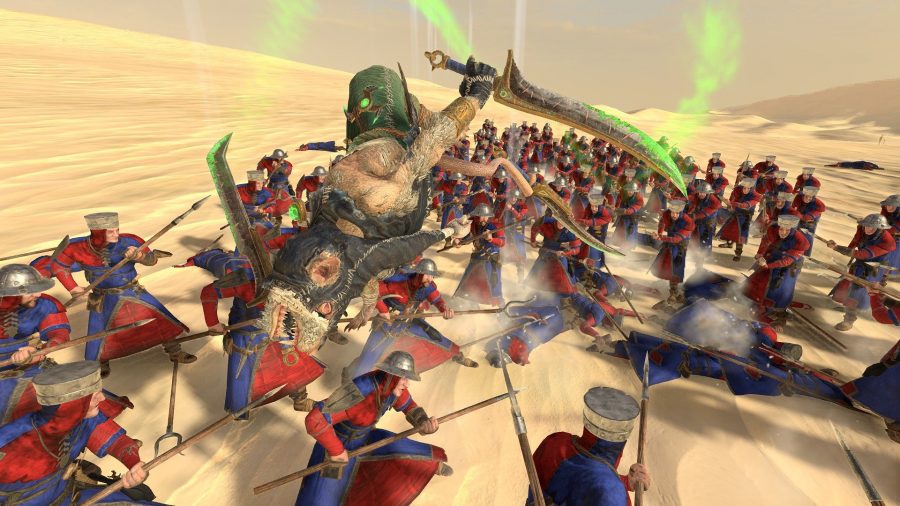 Many of Snikch’s animations use his tail blade, sweeping around him in great arcs, but he also takes advantage of vertical space in flipping over his enemies. In one especially mind-blowing animation, Snikch rolls into the air, and actually teleports before suddenly reappearing to slice his way through the ranks.

Snikch's animator studied Taekwondo in China, so there’s a lot of influence there

“That was Jie Ciu’s work. He drew inspiration from his culture and background as a martial artist. Although, as far as I know, he can’t actually teleport,” Lewis laughs. “We give our animators a lot of creative freedom and they rarely need encouragement to push the unique elements of a character. The challenge lies in allowing them this flexibility whilst making sure that the animation works with other elements of the game. The teleporting slash, in particular, required a lot of collaboration with design and VFX for it to work well within the game.” 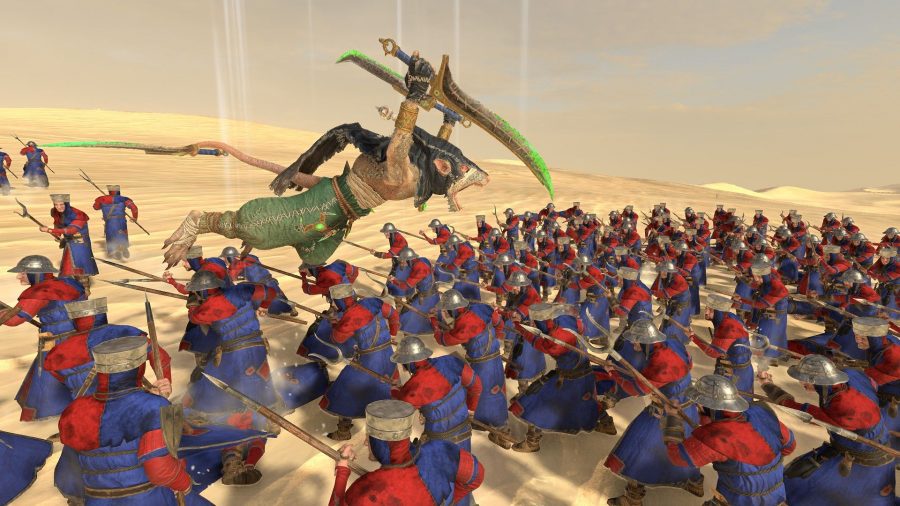 The Eshin Lord animations stand above those we’ve seen so far in Total: War Warhammer, but from a lore perspective, that kind of makes sense. Eshin’s combat style has its origins in the far east of the Warhammer world, in Cathay, Nippon, and Ind (equivalent to China, Japan, and India, respectively). This influence can be seen even in the characters’ resting animations, whether it’s Snikch’s Buddhist-like meditation ritual before combat or the Master Assassin’s high kicks.

“Snikch and the Master Assassin were both animated by Jie. Prior to taking up animation, Jie studied the martial art of Taekwondo in China, so obviously there’s a lot of influence there,” Lewis says. “But their exaggerated actions owe more to the cinematic representation of the martial arts than any one discipline.” This unique style can be seen in even the smallest of their animations, such as the Eshin Sorcerer’s spinning staff, which sets him aside from all other spellcasters, or the Master Assassin’s use of shurikens in combat, launching himself into the air and tossing them down on his enemies in a spray.

Watching Snikch – a lone rat dancing through enemy formations, the green trails of his weeping blades following in his wake – you see what makes Eshin special. The Skaven are a race who favour expendability, sacrificing thousands of slaves and clanrats to get the job done. But Eshin are the opposite. The fearsome skills of elite individuals are their stock-in-trade, and among the Skaven they’re a unique product. 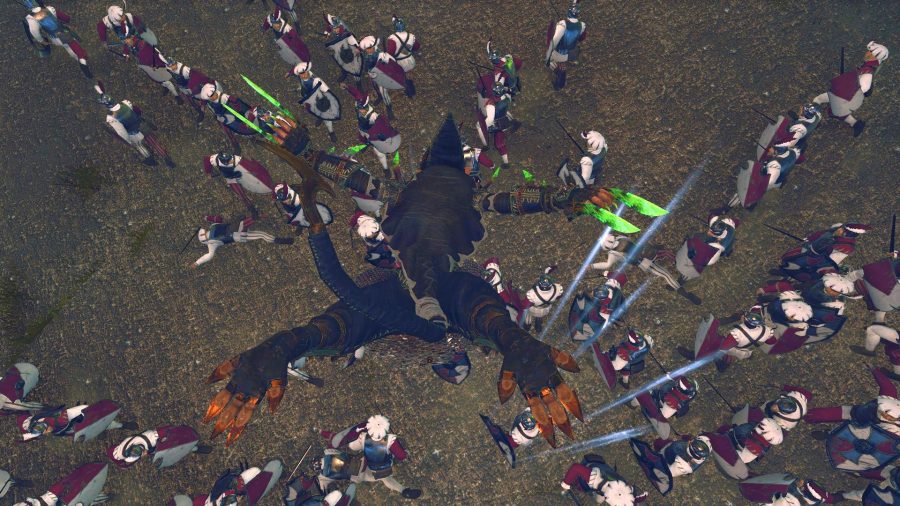 And none more so than the skills of the Deathmaster. There are countless stories of Snikch’s death-defying escapades – murdering entire clans, burning down cities, and blowing up armadas. All Clan Eshin’s assassins are honed to a fine edge, but stories like these make you realise a key component of Snikch’s psyche is that he’s actually suicidal. How do you go about designing such a character?

The best assassins are never really beaten. Skaven usually run away, but fighting a Master Assassin you might discover a rare animation where if you beat him in a fight, rather than facing the humiliation of defeat, he will cut his own throat.

“Visually, we take a lot of cues from both the Games Workshop miniatures provided, as well as the garb depicted commonly in ninja costume work,” character artist Baj Singh says. “These range from the face masks, seen primarily on the assassin units, to the roomy pants, which allow for flexible and acrobatic movement and are predominant on pretty much all the Eshin units. A lot of this look is sold in the actual animations, giving the Eshin a sneakier and stealthier look whilst retaining their jittery nature.

“Of course, the additional tail blade for Snikch really goes a long way to pushing the Legendary Lord above and beyond the lower tier units within that faction.” There are also some other wonderful visual touches in Snikch’s design, such as his jester-like hat. Though this was inspired by “following the miniature design” as Singh says, it does give a sense of Snikch as a performing trickster, employing illusion and acrobatics in combat similarly to Warhammer 40,000’s Harlequins. 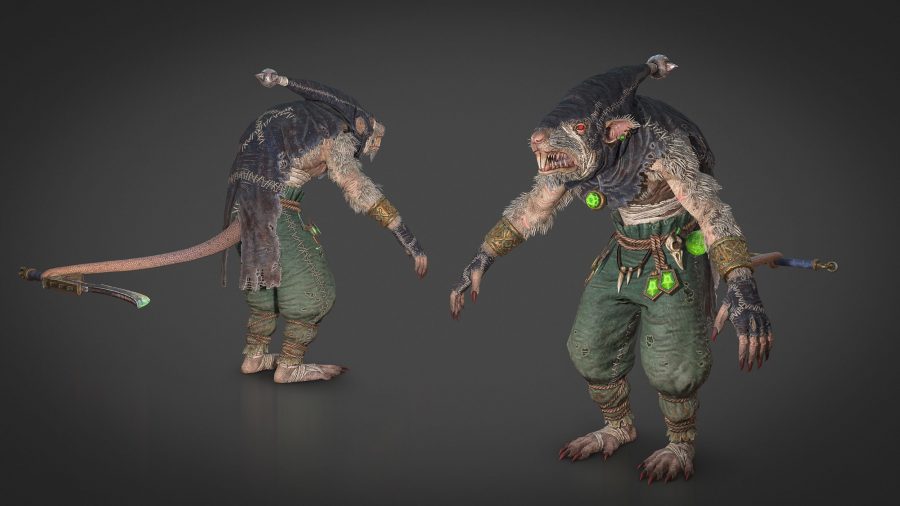 When I spoke to Anders De Geer, game director on the first Warhammer: Vermintide, he made the observation that “Skaven are not supposed to be rats acting like humans, but rather humans acting like rats.” There is always a human quality to the Skaven, but twisted out of shape, exaggerated into parody.

I think Snikch perfectly represents that quality. Look at that tail blade, for instance – a perfect visual representation of human weaponsmithing combined with the capabilities of a rat, and becoming something more frightening than either in the process.

You can see Snikch in action in The Shadow and The Blade when it releases later today. That is, if he doesn’t see you first.