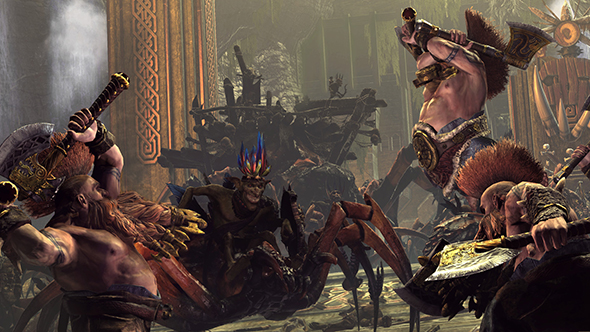 The floodgates once holding back the rising tide of Warhammer have been open for years now, and the franchise’s place in videogames has gone far beyond the likes of Dawn of War and Space Hulk in the past few years. Games Workshop have had an especially successful 2017, it seems.

Check out how the Games Workshop videogame train is rolling with our Total War: Warhammer II review.

According to This is Money, Games Workshop shares are up 150% for the year, the culmination of a rise beginning in midyear 2016. That tracks with the release of the first Total War: Warhammer, suggesting a bump either from their licensing deal with Creative Assembly or the resulting interest from videogamers.

Of course, Games Workshop is still primarily a tabletop company – they just license out their property to videogames – and the biggest bump began in June of this year, after the release of the 8th edition of Warhammer 40,000, their premier tabletop game. The organization’s profits have risen £16.9 million to £38.4 million over the year, aided in part by the lower value of the pound.

That comes after a pretty flat previous couple of years, indicating that whatever changes Games Workshop have made recently, they’ve had a much bigger impact than willy-nilly videogame licenses.