Gosh, it’s getting good now. Another corner of the Total Warhammer world is filled in with flavourful conflict. The identikit faction leaders are an endangered species, doomed to be replaced by individually voiced Legendary Lords from the depths of Warhammer’s back catalogue.

Or so it will prove if developer Creative Assembly keeps up this pace. The Hunter and the Beast adds the Emperor’s Huntsmarshal Markus Wulfhart and the giant walking crocodile Nakai the Wanderer, and arrives alongside a free patch that introduces the ancient Saurus Gor-Rok, too. And we’re getting Gotrek and Felix next month, though they won’t be faction leaders. It’s starting to feel like you can’t swing a choppa in this world without hitting one iconic warlord or another.

For fans of the setting it’s getting to be a bit of a soap opera. Chatter with my friends focuses on characters and events: ‘that wuss Teclis bribed his brother into ganging up on me, the bastard elven snake.’ Creative Assembly’s determination that these DLC packs should all be tightly themed ensures that newcomers can get in on the drama, too, putting rivalries front and centre. Hunter and the Beast is no exception, riffing on colonialism and ‘civilisation’ vs. ‘savagery’.

Wulfhart is leading an expedition into the Lizardmen’s homeland of Lustria, intent on plundering in the name of Emperor Karl Franz. Thus, excitingly, this is the first time the Empire has been playable in Total War: Warhammer II’s Vortex campaign, so those who didn’t play Warhammer I are essentially getting a whole new race with this pack. 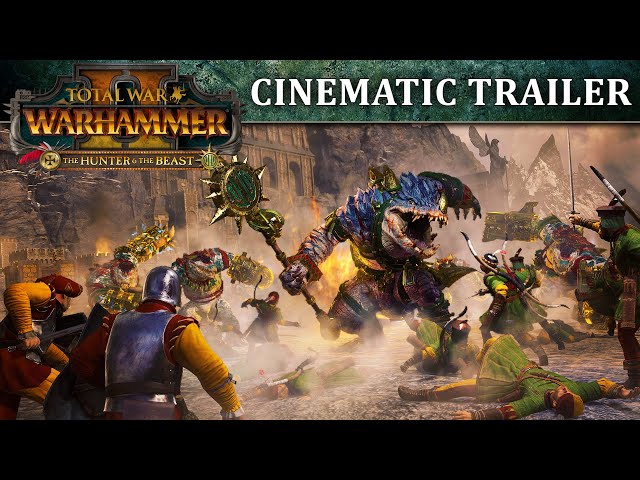 Because it’s far from home, Wulfhart’s expedition depends on supplies from the Empire. This is mechanised in the fact that advanced buildings are locked behind tiers of Imperial Acclaim, which you earn through expansion. This limitation on your roster is offset by shipments of troops from home, the quality of which starts reasonably high (I got three units of Empire Knights and two of Outriders with grenade launchers on my fifth turn) and gets higher still with new Acclaim tiers.

Rumble in the Jungle

As ever, The Hunter and The Beast adds some new units to play with. The Empire's War Wagon is a nice surprise from Warhammer’s fourth edition, while the Lizardmen's Razordons fill a final gap in their tabletop roster, but the highlight is clearly their Dread Saurian. The biggest unit in the game, it has almost 6,000 more HP and 170 more weapon strength than a Star Dragon.

Wulfhart’s second unique system is Hostility, which reflects how pissed off Lustria’s locals are at you. It rises in line with the volume of arse you kick – taking a settlement will raise it by a full point – and, somewhat bizarrely, this includes arse belonging even to the Lizardmen’s own enemies. I’m not sure why they’d get mad at me for killing Skaven, but at least it has the effect of forcing you into conflict with them, which reflects the theme of the DLC: as Hostility rises, you get public order penalties, diplomatic relations with all Lizardmen factions suffer, and they get combat bonuses against you. At peak hostility, a fully loaded Lizardmen army spawns with the intent of hunting you down.

This conflict is a constant roil rather than a swelling tidal wave, in contrast to the Tehenhauin vs. Skaven showdown in the previous Lord pack. Hostility will automatically reset to zero a few turns after you hit its maximum level, after which it’s not too hard to make up with the Lizards – Wulfhart starts at war with Nakai, but I got a non-aggression pact out of him fairly easily. Unfortunately, he was killed off by some orcs shortly afterwards. 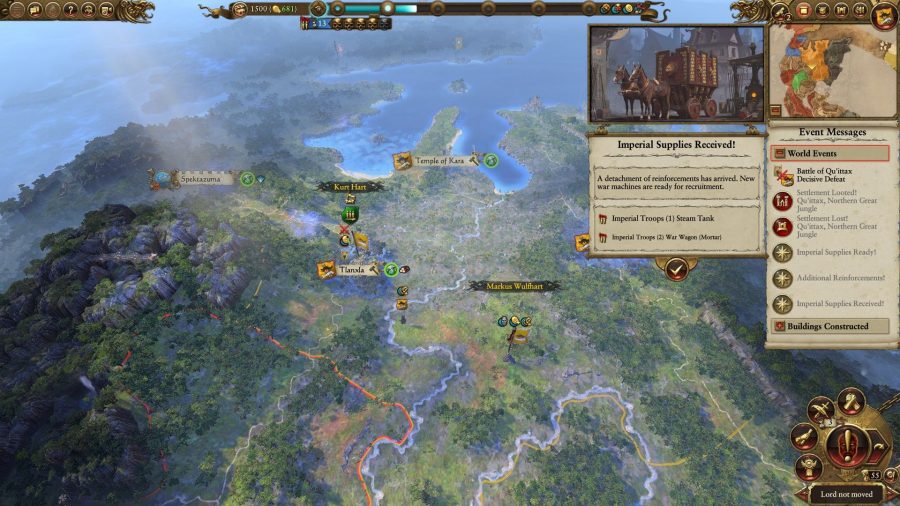 The interplay between Hostility and Acclaim is the coolest part of Wulfhart’s campaign. You get reinforcements more quickly at higher Hostility levels, which is a huge advantage as it means you can acquire a Steam Tank and Demigryphs at Acclaim tier two. Provided you can maintain such expensive troops and manage public order, Hostility is nothing to fear, and it can be to your advantage to keep it high.

The Hunters' stories are wonderful, but they remind you this is a strategy game not an RPG

Wulfhart also gets access to a few special heroes – his Hunters. Creative Assembly clearly intends them to be a grizzled bunch of adventurers with murky pasts, like Vermintide’s Ubersreik Five – the art in the relevant notification panel shows Wulfhart cocking an ear to some tavern chatter, which gives you an idea of the tone. Each Hunter has a backstory and a quest relating to some personal conflict or other, which you advance by leveling them up, moving characters to particular regions, defeating armies, and so on.

These quest steps are generic and/or confined to Lustria, which means I often satisfy them inadvertently. Wulfhart’s starting position in the Vortex is a tricky one, with most neighbours relatively strong and hostile, the Hunters’ quests are rarely my priority. When they do progress, they grant various buffs for the relevant Hunter and a bit of story to read in a notification box. In substance those stories are wonderful, but in presentation they remind you that this is a strategy game, not an RPG. Everything is set up to cater to a grand perspective. I really do love what CA is trying to do here, but it still feels incongruent to read about an Elf’s personal life in a text box while armies cross a continent in the background. 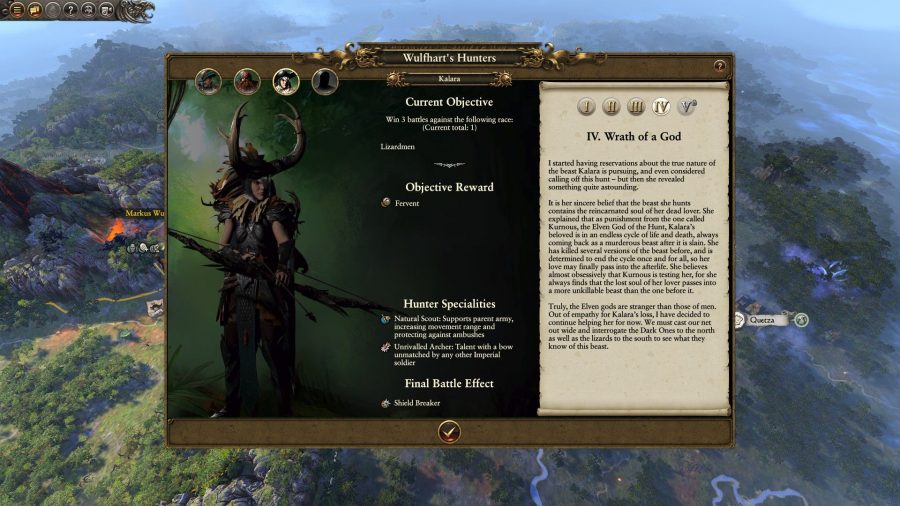 Wulfhart’s nemesis adds a few smart twists to Total War: Warhammer’s horde armies. When you conquer a settlement as Nakai, it’s automatically ceded to the Defenders of the Great Plan, a Lizardmen faction that are your permanent vassals. This means they pay you tribute each turn, and the richer they get, the bigger the tribute. You also get a choice of three Old One gods to honour with a temple in the conquered city, with more temples unlocking a number of campaign perks and Blessed units for you to spawn.

The catch is the Defenders have to hold on to those cities, or else your tribute and your temple count both drop. And if you’re thinking you’ll be able to set them up with so many cities that they’ll snowball and take care of themselves, I’m afraid that won’t happen – the Defenders are a passive faction, and field no armies. On the flipside though, they seem to build garrisons in the cities they take, so they’re relatively tough nuts to crack.

That’s just as well; without any armies, the Defenders are always at the bottom of the pile for military strength, so they’re at the top of the AI’s hit list. They’ll draw a lot of enemies, which means you will, too – the downside of having the Defenders as your permanent vassals is that you have to stick up for them in every war that targets them. There’s no option to decline. 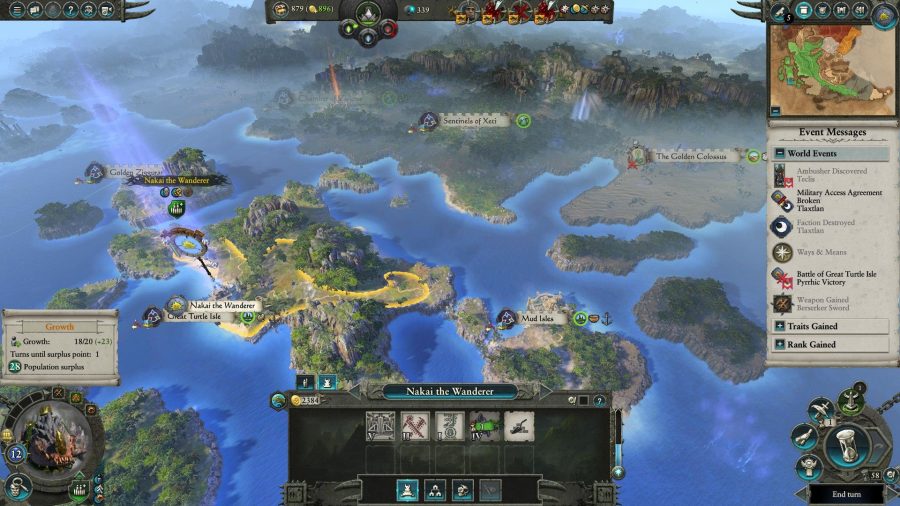 The upshot is that, if anything, you have to be more careful about your conquests than in a regular campaign: you must take settlements that even a passive AI can hold. Once I figure that out and take the relatively secluded Turtle Isles off Teclis, Nakai’s campaign really starts to come alive for me. Until then, there were a few moments early on that reminded me of the more boring bits of my Noctilus playthrough in the Vampire Coast expansion: sometimes I had nothing better to do than move Nakai to his next target and click ‘end turn’. This led to a lot of time spent watching the AI play.

But as I say, things soon picked up. Nakai also lacks Noctilus’s feeling of overwhelming freedom; his campaign is much more tightly structured and localised. There’s not much point leaving Lustria – you can’t trade with anyone, and your overall campaign goal is to defeat Wulfhart’s four Hunter champions, who are unlikely to go very far. After you do so, the final battle unlocks. 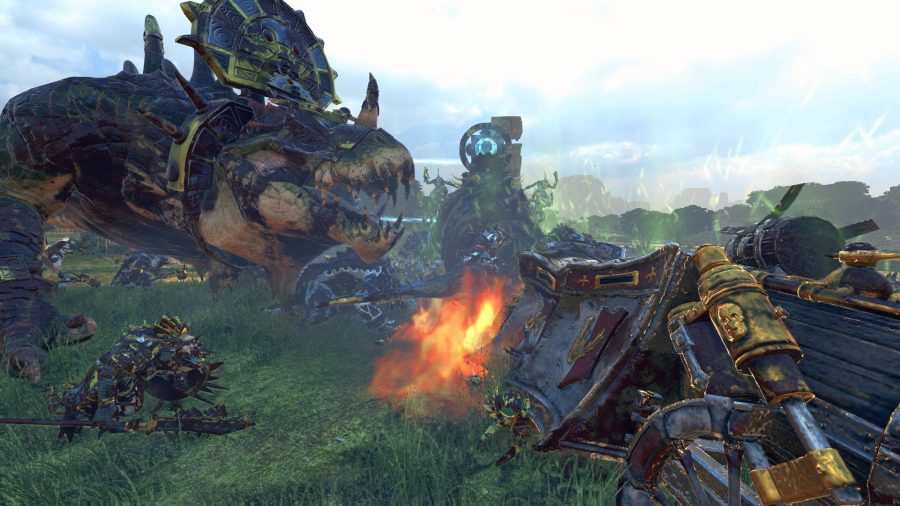 I achieved this in a single evening over 88 turns, or between six and seven hours. So it’s worth noting these are not especially long campaigns, but they’re a lot of fun. Wulfhart and Nakai are a bit of an odd choice; I doubt any fans were demanding this odd couple when favourites like Malus Darkblade and Grey Seer Thanquol are still missing, but surely CA has plans for them that fit their stature. In the meantime, the pair we’ve been given are a nice surprise, and have inspired another thoughtful shake-up of two familiar races.

That’s as expected. CA has this kind of DLC down to a fine art at this point. Moments of irritation occur, but are fleeting – there’s more than enough here to justify a full playthrough as both Wulfhart and Nakai, which means comfortably more than a dozen hours of violent, reptilian fun. Hard to beat for $8.99 (£6.99). And, honestly, what other game will let you see a fictional titanic dinosaur eat a steam tank?

Total War: Warhammer 2 - The Hunter and The Beast review

Some ideas don’t fully land, but there’s more than enough here to provide hours of fun in what’s fast becoming an excitingly crowded and appropriately violent realisation of the Warhammer world.