In a world inspired by Tolkien and Medieval/Renaissance Europe, the Skaven are one of Warhammer’s more original races. They’re certainly among the most popular. This has always bothered and confused me, because I don’t like them very much. But after playing Total War: Warhammer 2’s latest DLC, I’m having a bit of a change of heart, and it’s all because of the undercities that are coming in a free patch alongside the DLC’s release on April 17.

Undercities are established like pirate coves – either by an agent (specifically, the warlock engineer) or after a conquest. But that’s where the similarities end. You can do so much more with an undercity.

There are four building slots, and six potential building trees to fill them with. There are trees for both food and money, and one which gives up to a 10% chance of founding an undercity in a neighbouring region – this is essential if you want a big under-empire, as the engineer’s spread ability is on a cooldown. For the first time, you really can be the devious, cunning Skaven of Warhammer lore, siphoning money from the clueless man-things above as you watch your under-empire spread, infesting the roots of the world. Turn off the lights, wear a hoodie, and cackle evilly for maximum effect.

Or you can be a bit more direct. New Skaven Lord Ikit Claw gets the option to build a Doomsphere, starting a 15-turn countdown to a warpstone-tinted nuclear explosion that’ll reduce even a tier-five metropolis to a ruin. Everyone else can summon an army – splendidly called a ‘Vermintide’ – to overwhelm it, or can confer various buffs to support a conventional invasion. These include more campaign movement, faster replenishment, and army-wide Vanguard deployment for local troops. Every building in an undercity adds a small quantity of Skaven corruption, which can add up to cause public order problems on the surface. 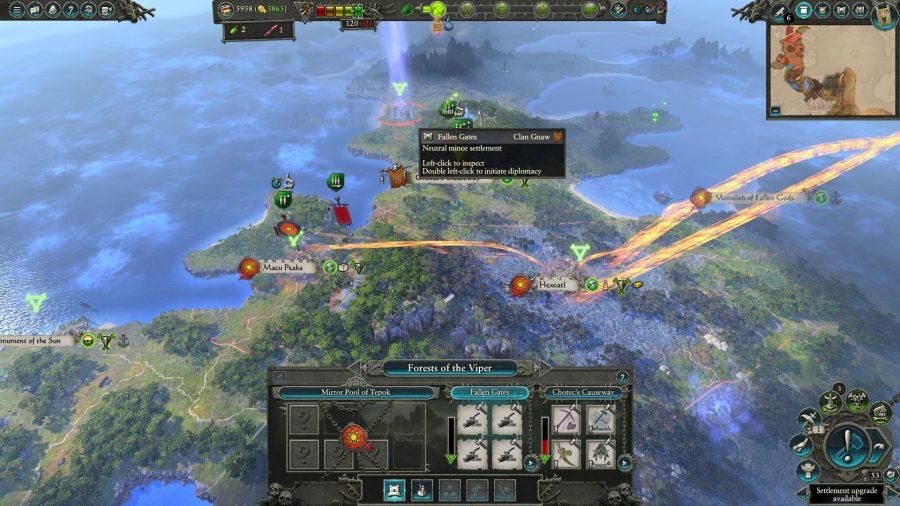 The more developed your undercity, the likelier it is to be discovered, with powerful buildings – such as a strip mine that’ll extract heaps of resources for you to trade – adding 80 points to a discoverability meter that caps at 100. You can lower your discoverability through a concealment tree, while enemies who suspect an undercity can raise it through heroes or new scouting buildings.

With this DLC, the Skaven fully become their nasty, ratty selves

And so undercities change how it feels to play against the Skaven, too – it’s a far more anxious experience now. Creative Assembly has always understood that the Skaven should be felt more than seen, with tricks like having their cities appear as ruins on the world map, and visual evidence of their corruption being more subtle than that of the Chaos or Vampiric varieties.

But it didn’t quite work. You see a Skaven army wandering around, and you know that the ruins nearby are probably rat-infested. I rarely felt surprised or unsure of their presence. Things are different now. 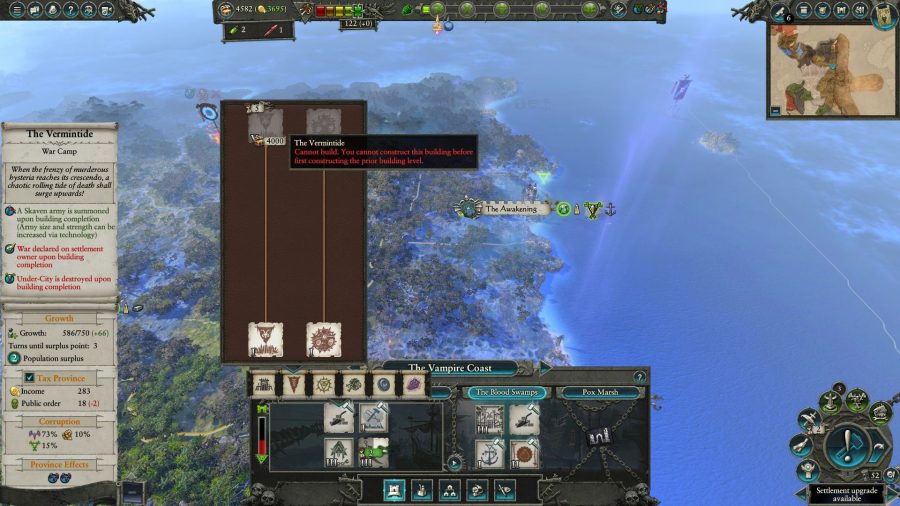 I’m about 50 turns into my Tehenhauin campaign and happy with how it’s all going, when I notice that Skaven corruption is on the rise in my heartlands. I’ve been meaning to take the neighbouring province – which I know is full of rats – for a while, so I get on with that and assume that’ll take care of the corruption problem. It helps, but doesn’t solve it entirely, and I’m running low on ideas.

Is this a sign that a mass of chittering rats is swelling beneath my feet? I don’t remember being visited by a Warlock Engineer, but the under-empire can spread passively. Is that what’s happened? Has a cancer that took root one, two, or more provinces away really metastasised this far?

Worth buying? Here’s our the Prophet and the Warlock DLC review

It’s an uncomfortable thought to consider, and more so when you ponder the implications. To root it out, I’d have to build a scouts’ camp. That’ll take a building slot that I could use to get some Temple Guard, or for the Star Chamber I need to start Lord Kroak’s quest. And so I’m tempted to behave like most of the world does in Warhammer lore, and pretend as if the Skaven don’t exist. The under-empire has actually got me to empathise with Skaven-deniers.

It’s a fantastic mechanic, and has kinda got me to see what everyone else does in Warhammer’s iconic ratmen. They’re such loathsome, awful little creatures – cowardly, utterly devoid of morals, unjustifiably sure of their own superiority, yet delighted to stab one another in the back at the flimsiest excuse. But it’s their very shamelessness that, I think, is central to their appeal, and the Prophet and the Warlock adds new ways to indulge it. It enriches the ‘shameless bastard’ fantasy. With this DLC, the Skaven fully become their nasty, ratty selves, and are all the more compelling for it.