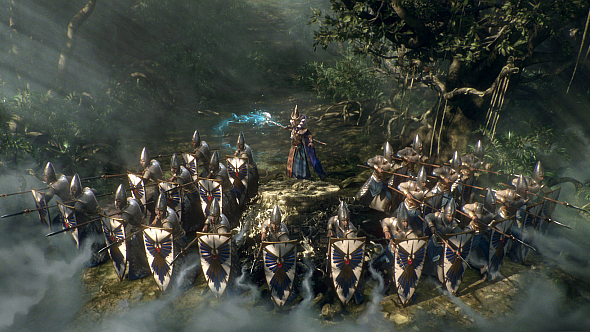 A developer diary has been uploaded on the Total War YouTube channel, featuring comments from the dev team about their vision for the recently-announced Total War: Warhammer II.

We go through the new races and campaign in Total War: Warhammer II.

First, game director Ian Roxburgh and animator Elyse Gymer talk about the new races and the challenges in animating them. The Lizardmen were particularly tricky: “We tried doing mocap for them,” says Gymer, “and we found that they were pushing too far into the human side, so we went much more animalistic.” There’s some great footage of a Saurus warrior attacking on two legs and then scampering back on all fours.

Communications manager Al Bickham then enthuses about the Lizardmen roster, confirming the presence of many of their exotic dinosaur-inspired monsters, such as Terradons, Carnosaurs, Stegadons and Bastiladons.

Roxburgh and Bickham both suggest that we’ll see more variety in Total War: Warhammer II following the positive response to the varied faction mechanics we saw in the original. Expect the races to be even more diverse in how they operate, and for battles to take us to “different and sometimes wilder new terrain types”.

Jim Whitston, lead campaign designer, says “we’ve got very lush jungle, very beautiful but also very dangerous deserts, with all the hazards that that entails”. Expect magically floating Aztec-esque pyramids in the Lizardmen jungle of Lustria, while Naggaroth, home of the Dark Elves, will be “probably the most diverse area of the map that we’ve ever had” according to environment artist Emma Charnley, thanks to a large expanse of hardened lava.

Finally, Bickham confirms that the game will have “two legendary lords per race, each with their own start position. You can play co-op multiplayer with the same race, and that creates all sorts of possibilities, and it’s something the fans have been asking for.”

You can watch Ben and I chat through the game’s launch trailer in the video below, but it turns out I was wrong about one thing: the Slann in the trailer isLordMazdamundi. Perhaps his Stegadon mount – which to be fair is the main thing that identifies him – is a quest reward.