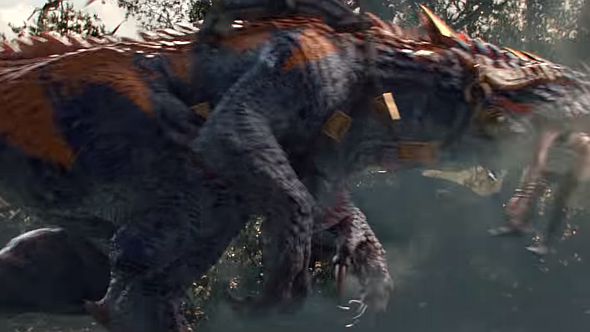 Kroq-Gar, the ancient Saurus Oldblood, will join Lord Mazdamundi as the Lizardmen’s second legendary lord in Total War: Warhammer II. A warrior where Mazdamundi is a magician, Kroq-Gar promises a twist for the more martial-minded Lizardman general.

The news comes via Total War’s Facebookand Twitter accounts, which have posted some very impressive concept art of the anatomy of Grymloq, Kroq-Gar’s ferocious Carnosaur (like a T-Rex, but meaner). The Facebook post says “there is no continent upon which Kroq-Gar and Grymloq have not fought, but for the last defenders of the now-ruined temple-city of Xhotl, the battle is not yet over…”

Grymloq was the largest and most ferocious of his brood of Carnosaurs, which led Kroq-Gar to claim him for his own… pic.twitter.com/7pDSonmPxm

In the lore, Kroq-Gar is the last of the Saurus warriors spawned in Xhotl, which was destroyed by daemons in the Great Catastrophe that first brought Chaos into the world. Kroq-Gar continued to fight the invaders throughout the jungle, with Xhotl’s last army dwindling around him, until the High Elves enacted the ritual that would drain Chaos from the world.

Mazdamundi himself (who had better have his Stegadon in the main game) then appointed him leader of the Saurus armies, and assigned him the task of exterminating all races that weren’t part of the Old Ones’ Great Plan. Which, according to Mazdamundi, is most of the world. (If you thought the Lizardmen were the good guys, hey, everything’s relative.) As with Total War: Warhammer’s other racial leaders, Kroq-Gar has plenty of magical items and special rules to inform his quests and skill trees, and plenty of story to inform his campaign mechanics.

It’s nice to have it confirmed, but we already guessed Kroq-Gar would feature. Not only is he the most prominent of the Saurus lords in the Lizardmen rulebook, but a Saurus riding a Carnosaur appears in the announcement trailer. Since a Carnosaur is a mount option for any old Saurus lord in the tabletop game, that doesn’t mean much in itself, but this Saurus happens to match Games Workshop’s miniature of Kroq-Gar exactly, from the colour scheme to the three pairs of horns on his saddle.

In other news, concept art for the White Lions, one of the High Elves’ elite infantry units, also appeared on Total War’s social media.