It was clear from a preview event in December that the Tomb Kings would rewrite Total War’s fundamental rules. What was not clear was how successful this would be over the course of a full campaign. Having now seized Nehekhara as Arkhan the Black, I can say more about what it has been like to play with this revision – Total War traditionalists may want to look away now.

There is plenty of fighting in the Tomb Kings’ campaign, but theirs is not a war of conquest. Though the four vanilla races are vying only for control of Ulthuan’s Great Vortex, this still involves taking a lot of territory – most notably, the scattered settlements that provide a constant drip of magical tokens. Incidentally, the vanilla races can be seen conducting Vortex rituals during the Tomb Kings’ campaign, and will even send interventions against each other.

But the Tomb Kings don’t care about all that. Indeed, when hailed by a High Elf in the diplomacy screen, Arkhan says it explicitly: the problems of Ulthuan are not the problems of Nehekhara. Their objective is the Black Pyramid of Nagash, a magical superweapon built by the Warhammer world’s first Necromancer. To claim victory, each Tomb King faction must control the Pyramid directly, as well as five of Nagash’s nine books.

These are carried by powerful rogue armies or held in settlements around the world, but once you have scored just one victory over the foe, the book is yours. So, unlike the Vortex currency settlements, you have no need to hold the territory you conquer. It has never been a rule that the winner of a Total War campaign must also be the biggest empire, but it tends to happen more often than not. Now, for arguably the first time in the series, you do not need anywhere near that much territory to win. Total War may have just got its first ‘tall’ rather than ‘wide’ playstyle.

Another reason for this is that Tomb King troops cost nothing to recruit and nothing to maintain. Instead, there is a hard cap on the number you can field in your armies at once. This lends a sense of prestige to the pinnacle units – the Hierotitan and Necrosphinx dwellings can only be built at settlement tier five, cost 12,000 gold each, and only raise their unit cap by one.

That is a hell of an investment to field a single unit, especially when other races are not limited in the same way. As satisfying as it is to field a Carnosaur or a Star Dragon, the Tomb Kings’ prestige units retain their lustre better when they are so hard to recruit. Ever since bringing my first Black Dragons on-stream in Heroes of Might and Magic II, I have loved that particular flutter of satisfaction one gets from earning and then unleashing a strategy game’s most powerful toys, and the Tomb Kings deliver it in a big way. 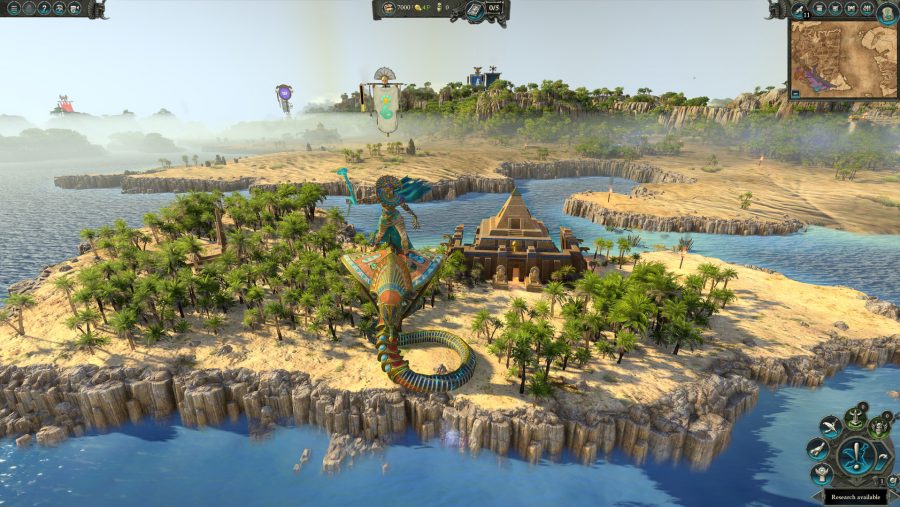 Far from the leafy heights of the tech tree are trash-tier skeleton infantry, which are uncapped. This means all that prevents you from running a 20-stack right away is recruitment time. As Settra or Arkhan, you will probably fight a rival Tomb King sooner or later, which means you are guaranteed to run into another 20-stack of undead. This lends a grindy, attritional feel to those early battles; enemies do not run and must be worn down.

To compensate for limitless units, you only get one army until techs unlock others. Your economy also starts small – gold income will be in three figures for a while. Since your infrastructure costs almost as much as anyone else’s, this is a problem: your units may be free, but the buildings that produce them are not, so you need to get money from somewhere. That somewhere is post-battle loot. Tomb Kings can earn thousands from a single fight, and their characters have plenty of skills to make raiding and sacking cities even more lucrative.

This gives you a strong incentive to be on the warpath early on but, eventually, buffs granted by techs and buildings will stack, such that your economy becomes competitive with other races. With so few overheads, the Tomb Kings do not need to stress over their finances past a certain point in the campaign. Where the vicissitudes of unit recruitment and revenue growth will make other races’ balance sheets read like a zigzagging heart monitor, the Tomb Kings’ is a smooth curve, steepening toward the endgame: as Arkhan, I was pulling in 10,000 per turn with five full armies (‘normal’ difficulty) by the time I finished. 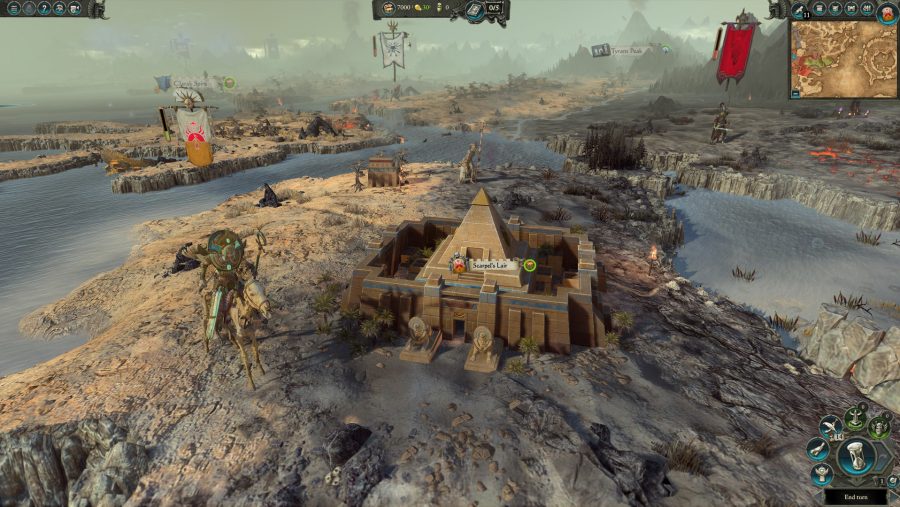 For other races to match that kind of cash with that kind of military, they would need a sprawling empire with a well-developed infrastructure, but I never set foot outside of the Tomb Kings’ homeland. Even the Mortuary Cult, where you can craft magic items and powerful unique units, seems designed to encourage this nativism. Everything but raising your army cap costs trade resources, of which the UI will point you towards the nearest source. I found everything I needed in Nehekhara or nearby, and was able to equip Arkhan with purple items in all his slots – something you would seldom see in any other race.

Each Book of Nagash confers powerful faction-wide bonuses. One enables the recruitment of certain Vampire Count units, another boosts army and unit capacities, and a third will conjure a sandstorm after conquering an enemy settlement. It's all rather cool.

As a result of all this, I – in pleasant concordance with the lore – found that I lost interest in expansion once I had consolidated my hold on Nehekhara (and Araby). A combination of strong Lizardmen neighbours, unappealing climates, and the fact that I already had more than enough military might to chase my campaign objectives meant that I saw no need to push my borders any further south than Ka-Sabar.

Perhaps this is why my campaign as Arkhan the Black felt a little less epic than my other Total War: Warhammer II games. Or perhaps I mean ‘epic’ in a different sense: the Tomb Kings’ story is about seeking out forbidden knowledge from across the world, rather than forging an empire to span it. Again, traditionalists may balk, but having injected new life to the series by varying strategic mechanics with such success, you can see why Creative Assembly might feel emboldened to re-imagine the typical Total War campaign. If further justification is needed, they would be doing a disservice to the Warhammer licence by casting the Tomb Kings as global conquerors (with the possible exception of Settra). 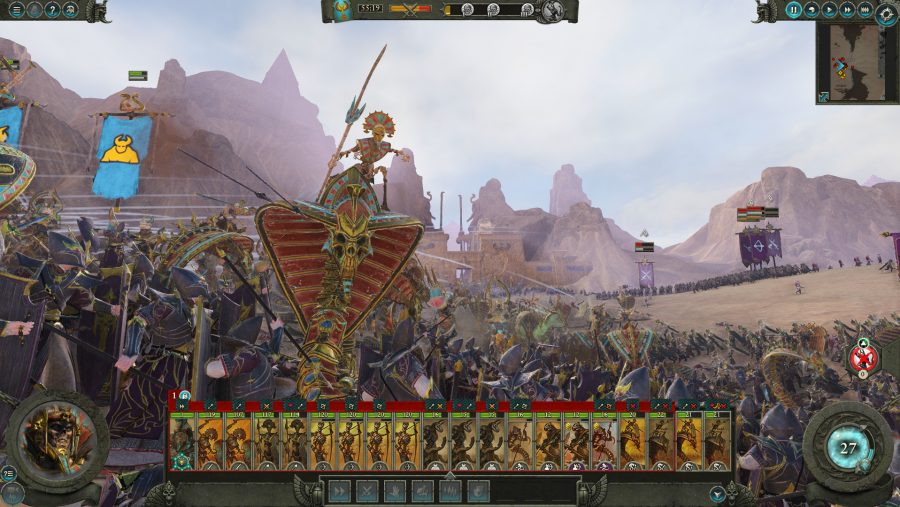 I encountered a couple of technical hitches. A Tomb King rite can summon a sandstorm over every region they own, which thumped my frame rate. I also got Arkhan’s victory notification and post-campaign score screen before entering the – brilliant and dramatic – final battle for the Black Pyramid, which is quite clearly when it is supposed to play.

Another possible issue is pacing. I recorded the entirety of Arkhan’s campaign, and it clocks in at roughly ten hours. Though this consisted of a healthy 150 turns, which compares well to 146 turns as Tyrion or 177 as Mazdamundi, many of Arkhan’s turns felt less substantial due to his needing to fight fewer wars or fend off dozens of vortex-spawned Chaos stacks – though this is a headache I cannot say I miss.

In fairness, Arkhan’s campaign may prove to be the quickest. He starts with one Book of Nagash, so he only has to find another four, and there are four on his starting continent. I never had to leave the Southlands. This isn’t necessarily a criticism, just a campaign with a different flavour, and there are plenty of others in this DLC if Arkhan’s is not to your taste. 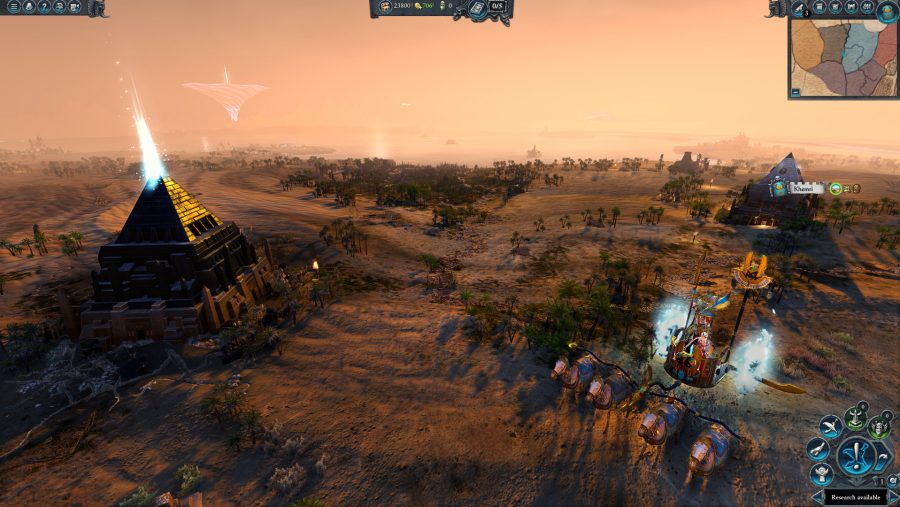 Khalida starts in the Southlands, far from Nehekhara, with a grudge against the Vampire Coast. For a challenge, Khatep starts in Naggaroth, surrounded by Dark Elves. Both have to cross the length of the New World to collect the books they need, and then an ocean to retake the Black Pyramid. It is easy to see how playing as either of them would change the cadence of a campaign – all this business about consolidating Nehekhara is pretty redundant when you do not start there.

This is the value that launching with four legendary lords and an (almost) complete army roster can offer. It comes at the expense of the mini-campaigns in previous Total Warhammer race packs – those tried to dig into the lore behind each race, but were poorly received by fans, and in my view the Tomb Kings DLC does just as good a job at telling their story. I do wonder if we will see the Necrolith Colossus (aka, Bone Giant) in future, but it is great to have all the Tomb Kings’ other toys right out of the box, and to want to take another Legendary Lord for a spin even after having finished Arkhan’s campaign.

Creative Assembly is occasionally accused of milking players with Total War’s DLC model. Let’s not get into that debate here – the very least that can be said is that Rise of the Tomb Kings is a much better format for adding new races than the Wood Elves or the Beastmen DLCs were. How much you value your £13.99 (or $18.99) is largely up to you and your circumstances, but in return, you will get a hefty chunk of DLC that adds what is arguably Total War’s most inventive race yet, along with four different ways to play them.

An innovative addition to the base game which makes meaningful, and often brave, changes to the series' traditional template.