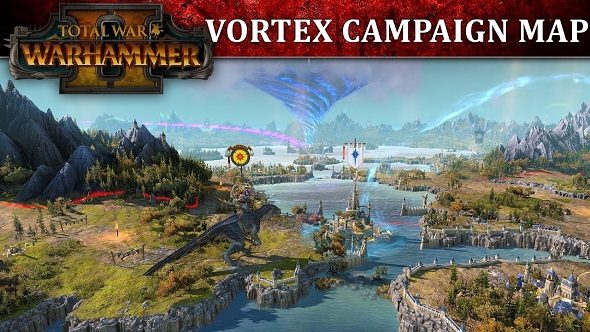 The Vortex campaign in Total War: Warhammer 2 is the main crux of the game – all of the races have their own desires surround a central vortex, which could promise ultimate power to those that can manipulate it. The whole map is centered around it, and we’ve now seen what that map looks like, with a flyover for the entire world map.

Here’s our guide to everything we know about each of the races in Total War: Warhammer 2.

You can watch it above, showing all of the starting locations for each race and faction, and how their starting locations might influence the way they play. Be warned – given this shows off some of the gameplay elements, if you’re looking to go in blind to much of the game’s design, this may not be the best watch for you.

Also, to maintain some level of secrecy, Skaven locations are hidden on the map. Can’t have you knowing every secret the game has! If this has whet your appetite, there should be some footage of the Dark Elves’s campaign coming out tomorrow, so keep your eyes peeled here for more in about 24 hours!

Total War: Warhammer 2 is coming out on September 28, you can check it out on Steam here.