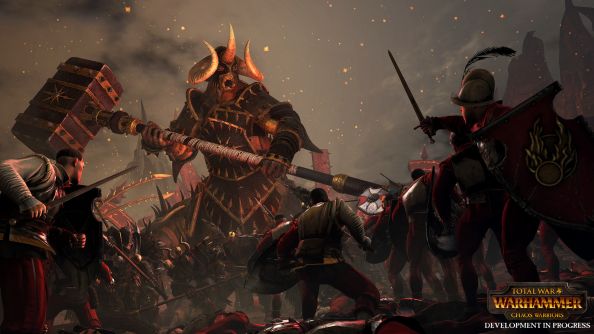 It’s not uncommon, in this age of first-day DLC, to hear developers accused of carving up portions of their games and selling them off for extra cash. It happened most recently with Blood Bowl 2, leading to capitulation from Cyanide and the free distribution of lizardmen among first-week buyers.

Now Total War fans are pointing the finger at Creative Assembly for cordoning off another race from the Old World. Chaos Warriors have appeared in trailers, but are playable only via DLC (and a pledge to Khorne, obv). More than 6,000 petitioneers are pleading with CA and Sega to change their minds.

While away the months til total warfare with one of the best strategy games on PC.

The ‘Total Fail’ petition points to Rome II’s disastrous launch and “endless” DLC, suggesting that dedicated Total War fans deserve a game that is both full and functioning on launch day.

“It is time to show faith and loyalty to the customers and fans as we have placed it in CA throughout these years,” writes Melbourne’s TotalWar Fan. “We demand to have a game that is Complete and without Cut Content. We are troubled by the direction the gaming industry has taken and we believe CA and Sega can rise above the dishonest practices.”

Total War: Warhammer will come with four playable races in the Undead, Empire, Dwarfs and Orks. Chaos Warriors and their attendant Legendary Lords will be sold as a separate race pack, but are also included as a pre-order bonus. Think you’ll buy in early?