The Warhammer world is even harsher, and even more full of things to kill, through the eyes of the Dwarfen King Belegar Ironhammer. His clan get a unique start position, bonuses and objectives, providing a more focused and characterful experience than the main Dwarfen campaign, and a new video on the Total War YouTube is here to walk us through it all. You’ll get to play Belegar’s campaign if you splash out on The King and The Warlord DLC.

Dwarfs and goblins on space hoppers not your thing? Check out our list of the best strategy games on PC.

I now summon my Warhammer knowledge to provide added value in the form of a lore grounding: Belegar Ironhammer of Clan Angrund is the rightful ruler of Karak Eight Peaks, once one of the most splendid cities in the Dwarfen Empire outside of Karaz-a-Karak. It was tragically lost in the catastrophe that devastated much of the Dwarfholds, and the ensuing invasions of Greenskins and Skaven. Belegar has vowed to reclaim it, but the foul goblin boss, Skarsnik, also covets it for his lair.

With this in mind, how does Belegar’s unique campaign begin? He starts far from his ancestral home in the mountains above the Border Princes. Reclaiming Karak Eight Peaks is, rightly, a major campaign goal, and until you get it done you’ll suffer +50% unit upkeep costs (Belegar’s campaign is rated hard, by the way, which is nice for Dwarfen fans looking for a challenge).

Belegar starts with a strong army, so he can set about his business right away. So thirsty for vengeance are his fallen clanmates that they return to life, providing Belegar with four level five heroes from the start. He also gets a couple of Ranger units, added in The King and The Warlord, and his unique skill tree enables you to confer a few buffs to Rangers under Belegar’s command, if you wish. 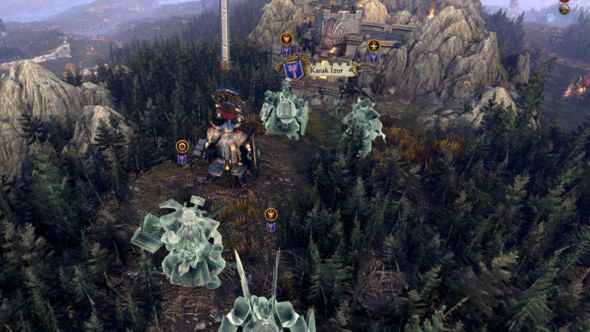 Skarsnik and his Crooked Moon tribe of goblins are also keen to take Karak Eight Peaks, and they start reasonably close to Belegar, so a thematic collision between the two is almost inevitable. Skarsnik gets a huge reduction of 40% in both recruitment and upkeep costs for all goblin units – including the bonkers new Squigs – so it’s to your advantage to confront him early, before he can generate Waaagh! stacks.

The Rangers look cool, by the way. They are good both in melee combat and with their crossbows, are faster than other Dwarfs, can hide in any terrain, and can deploy outside of your army’s normal deployment zone. This gives them a rare flexibility in the Dwarfen army, and Clan Angrund can recruit them at town level one, whereas the normal Dwarfen army have to upgrade a city to level three.

Check out the video above to see how Creative Assembly’s Battles Designer Simon Mann plans out the first couple of turns.