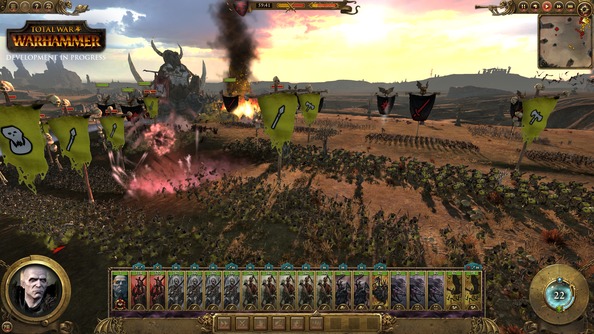 The thing about an undead army is – and do stop me if you’ve heard this – it can’t be routed. Unlike a Roman Legionaire or a Yari Ashigaru, the dead fear nothing. So taking control of Total War: Warhammer’s Vampire Counts isn’t just about having a soft spot for bats or central European folklore – it presents myriad unique strategies. If you harboured any suspicions that the four playable races in Creative Assembly’s upcoming strategy might lack definition, try a battle with the Vampire Counts.

Total War: Warhammer is currently waiting its turn to enter the echelons of the best strategy games. It’ll be interesting to see how that turn plays out.

Taking control of Mannfred von Carstein and his midnight aristocracy in battle means keeping three principles at the fore of your mind at all times. One: you can raise the dead. Two: you have no true ranged units. Three: your units will keep fighting until they’re completely depleted. They have no morale to lose, and will never run away.

I won’t pretend I’ve mastered the battlefield tactics of the Vampire Counts. It’ll take a long time to turn that limited range into a genuine advantage, understand the role of powerful early specialist units such as Vargheists, and learn when you really need to raise more troops and when to leave their bones undisturbed were they were slain. However: I learned enough to get me through a few battles without losing territory to the Dwarves to the south of my empire, or the rival Vampire Counts to the north and west. 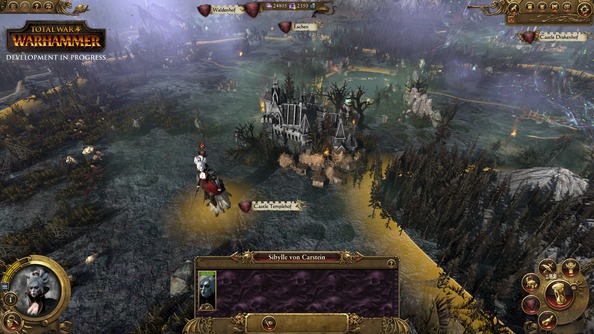 My most effective early tactic, such as it is, is to overwhelm with Grave Guard and Skeleton units, basic melee fodder which can be cheaply replenished after battle (and during, if I were to level up my general in that direction in future). It takes a while to get past the fact that I have to be so reckless with the majority of my units, sending them in en masse and closing them down with great haste to minimise the enemy’s opportunity to make use of their ranged attackers – which I have no answer for.

It feels a bit like taking a knife to a gun fight at first. And it only works with a particular army composition – I have upwards of ten Skeleton and Zombie units, cheap melee attackers who I can deplete without any significant impact on my economy. Were I later in the game, arranging an army of Vargheists, Crypt Horrors, Giant Bats and Cairn Wraiths, I’d need to think a lot harder about their deployment. In the early game though, it’s about emptying a bucket of inexpensive melee units all over your enemy.

Enemies, actually. I’ve decided to fight on two fronts, like all the great generals. Early in the game I’m encouraged to attack a rival faction of the Vampire Counts north of my home, Castle Templehof. Simultaneously to the south, I see a lot of Dwarven activity. Having seen how intricately an occupied stronghold is adorned with its invading force’s regalia, I make it a personal priority to drape my ghoulish stylings across a Dwarven cave entrance. 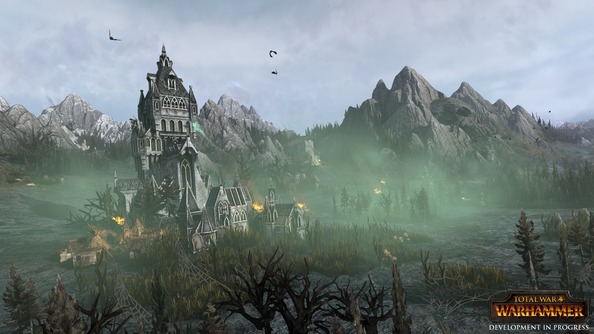 Then the inevitable happens: I make a total hash of both conflicts and financially cripple my entire empire.

The root cause is in my ability to raise dead troops from around the war map. It’s too tempting – and since I’ve foolishly decided to fight on two fronts, I figure I’ll need at least three armies. Three full, twenty-stack armies of mostly Skeletons and Zombies, headed by three level one generals, assembled in the period of about three turns.

This decision proves disastrous for two reasons. Firstly, I’ve quickly bankrupted Castle Templehof by spending all my Dark Magic (gold, for all intents and purposes) on new units, and compounded my debt by accruing a massive unit maintenance cost each turn. It was a plan that relied on my taking several settlements with my enormous armies within a few rounds, and in actuality I took none.

I ask creative director what I should have done instead to capitalise on the Vampire Count’s strengths in the early game. “Over-extending an army or moving too far away from your base is a risk that on very easy levels you might get away with,” he tells me, “but we’ve done a lot of work on the AI to punish you if you make wrong moves or punish you if you leave yourself unguarded.” 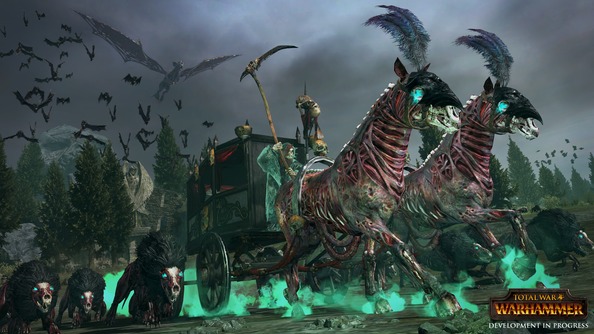 Difficulty balancing isn’t final yet, he explains, but I was duly punished for over-extending. It’s a signifier that this will be a very different campaign to previous Total Wars, less about painting the map your colour and more about hitting certain objectives to establish dominance.

To that end, Roxburgh and the Creative Assembly team have announced that players won’t be able to take control of the entirety of Total War: Warhammer’s campaign map. It’s friendlier to its source material that Dwarves don’t end up taking all the Empire’s land, say, but the chief motivation behind that design call is to avoid what the team describe as a “slog” in the late game, in which there’s nothing left to do but spread your empire to the farthest reaches of the map.

As someone who actually quite enjoys painting the map one colour, I ask Roxburgh if the team received a lot of feedback from fans about this phase: “It was a hot topic for a while, actually. Internally early on [when we were] designing how it would work, the conclusion was theoretically ‘I need to fight the whole map because that’s what Total War has always been.'”

“In reality, most people will pay a campaign game to a great degree but they won’t necessarily go the whole hog, owning every single region of every campaign they’ve played. Most times, you’ve won the victory conditions [before that point]. You pretty much own 17 regions, you’ve got 15 full stacks and you’re just going through the process for completeness rather than [because] there’s gameplay left.” 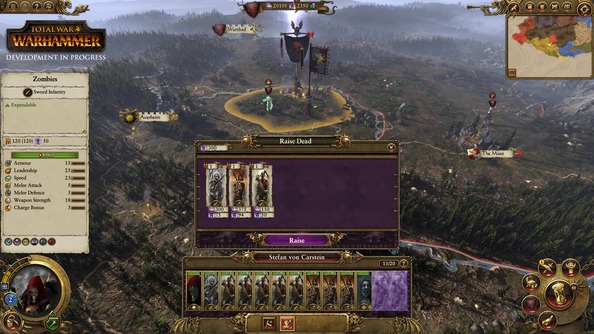 Not that the slog of painting the world map my colour is anywhere near a concern of mine at the present time. Having raised way too many dead, and consequently bled my Vampire coffers dry, I’m forced to downsize my army. I do a lot of said downsizing in the most heartbreaking fashion possible – simply deleting the units to make a pittance back, and lessen my per-turn maintenance cost. Then I hit on an idea.

What if I marched my army up to that Dwarven brigade who’ve been menacing my south borders? It’s not strong enough to beat them, but that’s exactly the point – I’ll force losses on their side, and hugely diminish my bloated military in the process. It’s win-win. Well, strictly it’s lose-win, but you see my point.

Thus begins a rather cathartic, no-stake battle. I assemble huge, flat lines of Skeleton and Zombie melee units and simply instruct them to charge at the much bigger Dwarven force. Very quickly I create a kind of soup. A soup of diminishing numbers on both sides. 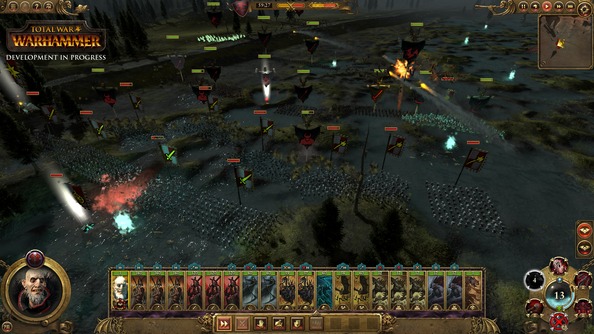 I’ve held a few Vargheists back, waiting for a few Dwarven units to rout or become fatigued. Taking the moment at which I’ve lost half my army as my cue, I charge the Vargheists in from their forest-covered flanks to deal one last blow.

The losses I exact on the Dwarven army aren’t as dramatic as I’d dreamed, but I’m no longer losing money each turn. Feeling suitably monstrous, I delete the units who bravely fought and survived the fracas, earning enough Dark Magic to think about building up my sole settlement – which I should have done right at the beginning, of course.

What’s interesting about this tactic is that it’d be just as effective if I genuinely wanted to make headway against the Dwarves – it’s not actually a suicidal tactic. “One of the key things [about] the Vampires,” says Roxburgh upon hearing my plight, “is that they take quite heavy casualties because they don’t rout – they crumble. 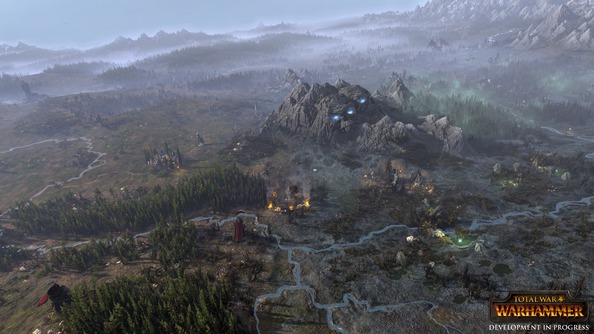 “So you find you have quite a depleted army after a battle, even if you win it. What you have to compensate for that is the ability to raise dead, as well as recruit units, to keep the bigger armies coming back in quite quickly.”

My folly has led me to an effective macro tactic for the Vampire Counts. Essentially: don’t get precious about your armies. A twenty-stack may take aeons to build in other Total War games, but for the Vampire Counts it’s a disposable commodity that can be assembled, spent on the frontline and replenished in just a few turns.

I’ve learned a lot by having to live with my mistakes in this playthrough, and in the process I’ve sampled a Total War game that feels so distinct from its predecessors it’s both exciting and daunting. With just a couple of months left in the game’s development cycle, the trademark sheen and layer upon layer of fascinating systems are in place. What may be lacking currently, is the means to get a grasp of those systems without tripping over yourself on the campaign map a few times.