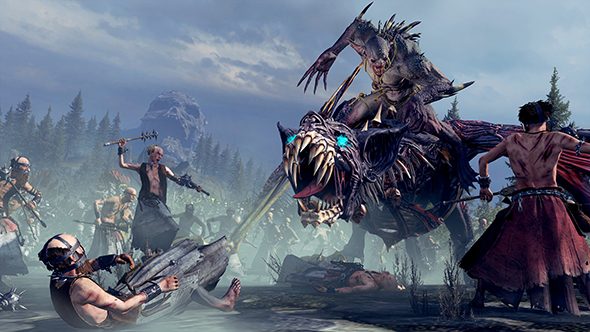 The boys and girls at Creative Assembly just won’t be happy until each and every one of us is capable of successfully leading thousands of troops into battle. Either that, or they just like making Total War games.

Like using your noggin? Check out the best strategy games on PC here.

Case in point: It’s only a few months after the most recent Total War game hit the shops – the fruitful Warhammer tie-in – and the studio is about to roll out yet more DLC for the game, this time in the form of The Grim & The Grave, due this September.

New lords and units will be wrapped up in The Grim & The Grave according to a handy press release sent to us by Sega, with Volkmar the Grim for the Empire and Helman Ghorst for the Vampire Counts – both taken from Warhammer fantasy battles – leading the line.

Two new lord types also make the cut, with the Vampire Counts being bolstered by Strigoi Ghoul King, and the Arch Lector joining the Empire.

Sega also notes that both the Empire and Vampire Counts unit rosters are being expanded with two brand new units each – The Knights of the Blazing Sun, the Flagellants and Free Company Militia all being added to the ranks of the Empire, while the Vampire Counts “will see their undead hordes imbued with dark magic by the gruesome Corpse Cart and volatile Mortis Engine.”

If that vivid description wasn’t enough, said new units are illustrated with gusto within The Grim & The Grave’s latest trailer, embedded for your enjoyment below.