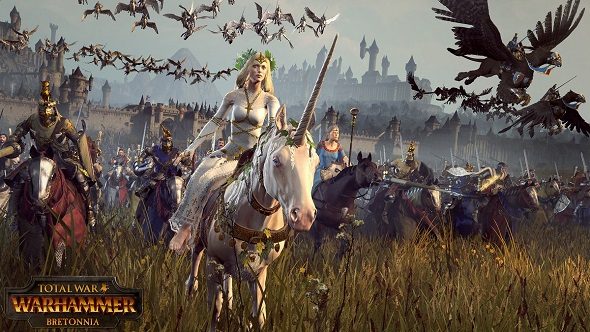 Total War: Warhammer’s Bretonnia DLC has just gone live, and should be available to download now. It’s free for all owners of the base game. Developers Creative Assembly have confirmed that the Bretonnia update will round off the first phase of Total War: Warhammer, so expect hype to start building for part two of the trilogy in the next few months.

Until then, take a dive into our list of the best strategy games.

Bretonnia is an Arthurian kingdom of chivalrous knights supported by meek peasants, and stands alongside The Empire as the second major human nation in the Warhammer world. Today’s free DLC fleshes out Bretonnia’s currently bare-bones roster with missing units from their tabletop rulebook, and unique strategic mechanics to make them playable in campaign mode for the first time. Creative Assembly have even added new, thematically appropriate units of their own devising, such as mighty hippogryph knights and greatsword-wielding foot squires, to bring the army up to the level of the game’s other core factions.

You can see some of the new units in this stream – skip ahead to 2:46:30 for the Bretonnia stuff – or check out a full description of their army roster and strategic mechanics at the DLC’s Steam page here.

CA have said from the beginning that Total War: Warhammer will be a trilogy, with new episodes playable both independently and together with previous instalments. They hope that the world maps of future games will tie in to that of the first, enabling you to play a grand campaign across the Warhammer world.

And with the Bretonnia DLC, it seems we’re at the end of the first phase in that ambitious project. 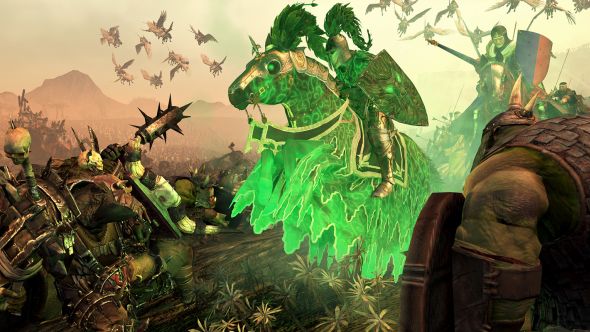 “We’re rounding off part one with a bang, not a wimple, and it’s a big thank-you to our players”, says brand director Rob Bartholomew. “The strength of our DLC sales means we can put more into our free content releases. Not only that, we can have faith in upping our content plans for the next two games.

“We want to make the most incredible fantasy trilogy possible. And with Bretonnia, we’re bringing our time in the Old World to a close. Production on the sequel to Total War: Warhammer has been underway for some time already and is now a key focus for the studio. It’s time to travel to new lands and discover new races.”

Exactly what those new lands will be, we don’t know yet. Personally, I’m betting on the elven realms of Ulthuan and Naggaroth, and possibly Lustria, where the Lizardmen live.

Total War: Warhammer’s free DLC schedule can be seen here, and you’ll note that Bretonnia isn’t quite its terminus: it seems we can expect a new lord and a mysterious “old friend” before support for year one of the trilogy is entirely concluded. Total War: Warhammer launched in May last year, so its first anniversary is more than two months away. Hopefully we’ll hear more about part two around then, if not before.

Bartholomew also confirmed that “our historical team are also working on a major triple-A title in an era we’ve not visited yet. Over 1.2 million people play Total War every month, with the majority playing our previous games. We haven’t forgotten that.”

If you’ve yet to get in on the fun, you can buy the Old World edition of Total War: Warhammer, repackaged with Bretonnia, at selected retailers, or get it on Steam here.

The gameplay shows off all three Legendary Lords, as well as the new knight faction itself, battling for dominance in the Old World in Grand Campaign mode.

The free expansion is releasing on February 28. Check out the gameplay here.

Update February 22, 2017:A livestream is scheduled for today, revealing Bretonnia as a full faction.

Creative Assembly have a stream lined up today, showing off Total War: Warhammer’s free Bretonnia race, due to be available next week.

Two members of the team will be present and fighting over a new area of the world, west of the Grey Mountains where this band of honourable knights makes their home. Embed below.

It’ll all kick off at 3pm GMT / 7am PST. They “vow that it’ll be a stream to remember” – we’ll leave you to decide if that’s due to particularly talented commanding or lack thereof.

The in-engine cinematic trailer shows armies of chivalric knights battling the hordes of the dead as a narrotor gives a rousing speech about duty and honour.

The new race will be fully playable in Grand Campaign, also expanding the roster for custom and multiplayer battles.

Have a watch of the new trailer above.

The faction has been present in the game from day one, but only to fight and trade with in the game’s campaign, or as a stripped-down version in Battle mode. Now they’re fully fleshed out and heading to the strategy game for free.

Bretonnia will be free and available for everyone on 28th February 2017.

Because of their placement in the game already, the faction seemed like an obvious choice for DLC, but we ended up with the Beastmen and a bunch of other bits first.

Made up of different classes of brave knights, you’ll be sending your armour-clad warriors into battle for glory and honour.

Bretonnia will also receive three playable Legendary Lords for campaign mode: the hippogryph-riding King Louen Leoncouer; Alberic of Bordeleaux, who dreams of seeking the Grail but is bound by duty to his dukedom; and the kingdom’s sorceress-in-chief, the Fay Enchantress.

The faction is yours for free on February 28.