A lone dwarf stumbles through a tunnel in the Worlds Edge Mountains. Lantern light glints off his pleated beard, and highlights the hammer and shotgun strapped to his back. Everything about his appearance screams preparedness, but now his chainmail is weighing him down.

Emerging into a rubble-strewn opening, he sinks to his knees and rummages through the loose contents of a crate, pushing aside cogs and levers to pull out the Old World equivalent of a jumper cable. Rounded pilot’s goggles grant him an expression of simple surprise, but this dwarf is not simple – he’s an engineer.

It’s no car he’s starting but a gyrocopter – a miniature air machine just large enough to sit one dwarf uncomfortably, powered by scythed rotors and steered by a rudder the Wright Brothers could have built. Right now the scythes stand still – it’s up to the engineer to bring the copter to life. Turning a stiff valve, he awakens an exposed propeller that could just as easily take a dwarf’s hand as lift him into the air.

PHUT-PHUT-PHUT-PHUT. The rotors spin into action, but there’s a clunk somewhere deep within the engine, and it powers down again with the whine. Like so much of the technology in the Old World, the gyrocopter has an experimental Age of Invention vibe. It cannot be relied upon – only persuaded.

By the time the engineer has coaxed his vessel into operation, it’s too late. The gyrocopter whirrs happily in the background as the dwarf succumbs to his pursuers – greenskin spider riders. In this, one of the first trailers Creative Assembly released for Total War: Warhammer, the copter is as much a character as its would-be pilot.

Animating static miniatures can require some invention. "Most of the time, the models are detailed enough," animator Lee Dunham says, but "there's a few times we've had to ask about certain changes because we couldn't get it to move otherwise. Games Workshop give us quite a bit of freedom to do that. We'll take a model and we'll imagine how it should work."

“The cinematic team did a great job,” art project director Greg Alston tells us. “You can imagine trying to start a dodgy car. It’s trying to get into that engineer’s mentality of, ‘I need to bang something there, to get it up and running’. It’s that sense that it’s not the best technology and there is probably some risk involved in flying this thing.”

The team at Creative Assembly had to bang a few extra things into the game’s engine to get that initial cinematic up and running – building a brand new animation rig for the gyrocopter in order to show more of its mechanical parts in motion.

“That would be something we’d go back and forth on with [the cinematic team],” lead technical animator Lee Dunham says. “Making sure that we had the parts we needed to be able to emphasise what’s happening with the engine as he’s trying to fix it.”

The effort was worth it, introducing one of the game’s most memorable units and establishing the faithfulness and attention to detail that would come to define Creative Assembly’s interpretation of Warhammer. More than that, it proved the studio could wrap its head around a challenge never tackled before in its historical games – flying units.

“We had to think about all of the different heights, and it adds so many complexities,” Alston says. “How do we make a completely new system to deal with attack animations in the air and on the ground?”

Working through headaches like these resulted in one of Total War: Warhammer’s most distinctive sights – a dwarfen gyrocopter tipping forwards as it descends to hack at grounded enemies with its rotors, like a “mad lawnmower”. 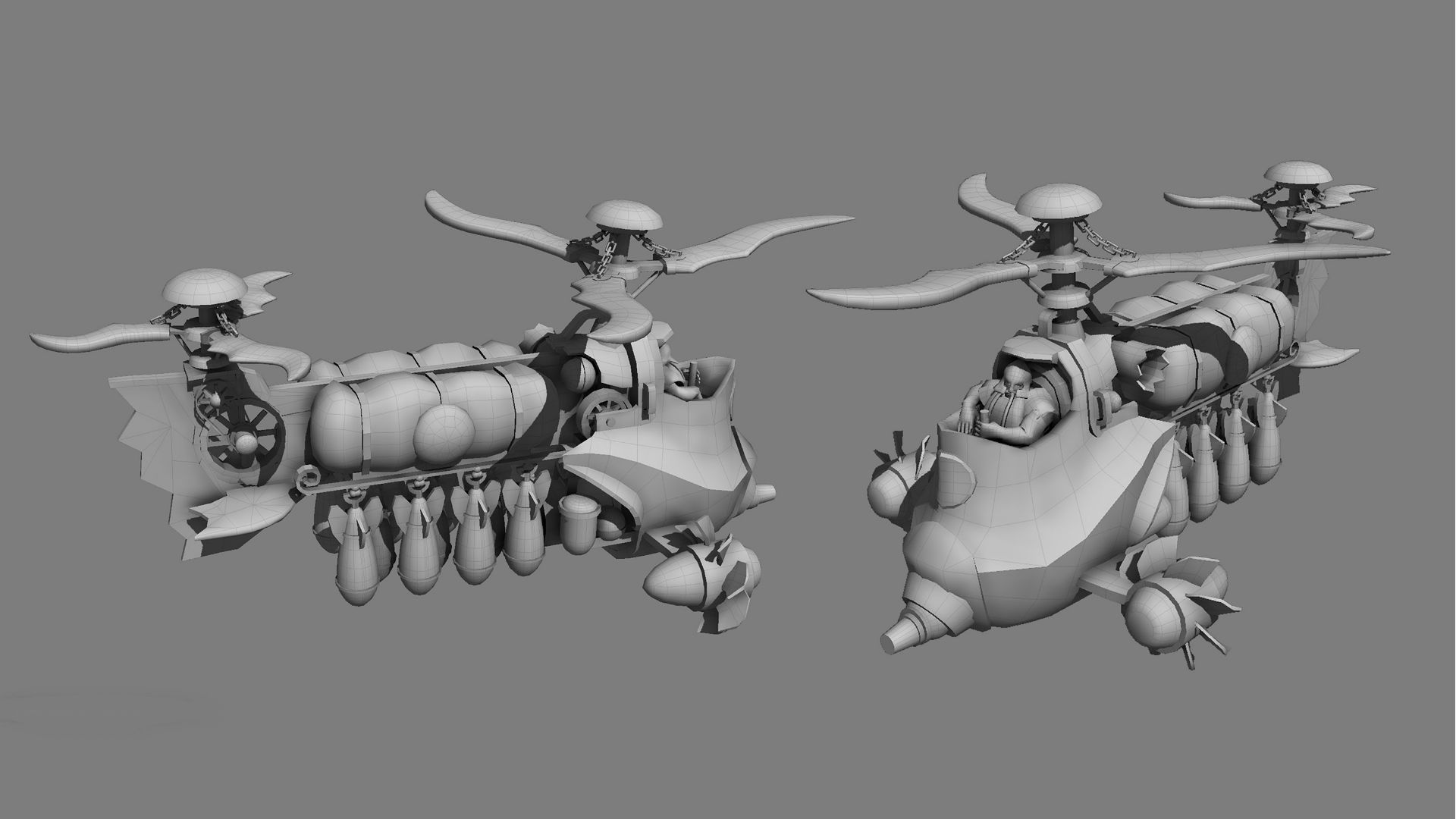 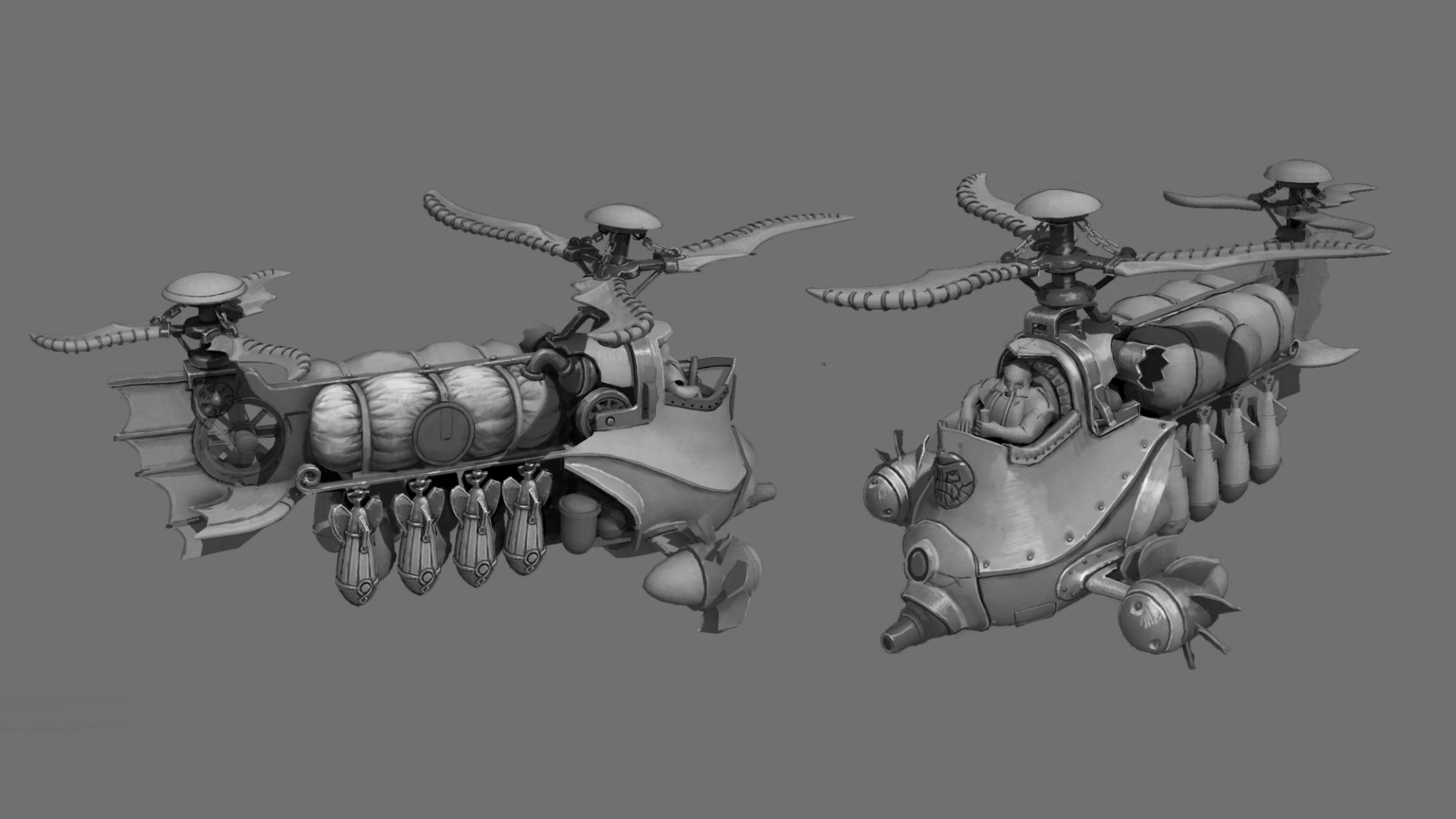 “From an animation point of view they were really quite simplistic because all they do is fly around,” Alston says. “You don’t really have to worry about idles or attack animations, they just go down and start mowing people.”

For the gyrocopter’s more heavily armed variant, the gyrobomber, Creative Assembly worked to keep the sense of tactile machinery they had already established – ensuring the number of bombs onboard is visually matched by the in-game model.

“We use the existing systems wherever possible,” Dunham says, “just so then we can focus on the more challenging tasks.”

It was trickier to convey the sense of temperamental technology that early cinematic had captured so well.

“With the blades going round, you just want to get that emphasis,” Alston says. “It’s a crazy kind of technology, obviously it’s not a modern helicopter where it’d be perfect. It’s powered by steam. You want to get that sense that they’re struggling.”

Perhaps that feeling is most apparent when you ask gyrocopter units to do something they’re incapable of – keep perfectly still. When not following your commands the copters sway sickeningly in the air, water dripping from their poorly-sealed undersides. It’s a sight that encapsulates the way danger and comedy intersect in the Old World. And together with their bulbous cockpits, too-short rotors, and the inherent inefficiency of steam engines, it raises a question: how do they even stay in the air?

“Magic,” lead character artist Baj Singh laughs. “It’s all magic. It’s one of the benefits of working in Warhammer.”

“Magic and steam power,” Alston adds. They must be talking about runic magic, since I’m sure they know that Dwarfs can’t use wild magic (and wouldn’t want to, thanks very much). But still: now we know.