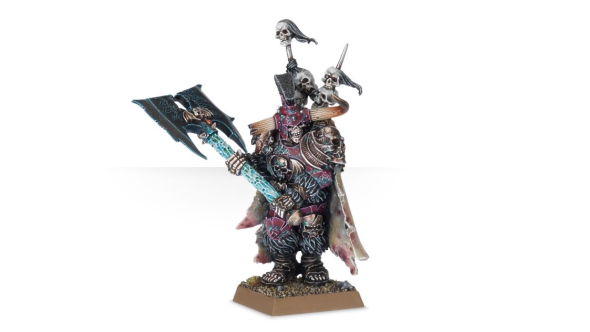 Update: It’s official! Krell is now live in Total War: Warhammer and he can be summoned into battle for free. The patch is live now and contains only Krell.

Creative Assembly also revealed that he is, in fact, the ‘old friend’ they’ve been teasing. I wish I had an old friend who could murder 20 people in a single swing.

The Norsca DLC has also just been announced. Read up on ice dragons and Fimir with the Norsca army roster in Total War: Warhammer.

Check out the video announcement in the tweet below:

Where is Krell? He's available now – plus 66% off Total War: WARHAMMER and 33% off all DLC! #skullthrone

Neither gives much away other than to suggest that Krell is coming. Needless to say, following the link out to Steam just bumps you back to the store front.

Krell is one of the oldest characters in the Warhammer tabletop game – both in its fictional lore and in the real world. He was once a Chaos Lord dedicated to Khorne, and killed a lot of Dwarfs before eventually meeting his comeuppance. He was resurrected by the big bad necromancer Nagash as a powerful Wight, then fell into the service of Heinrich Kemmler, the Lichemaster. Expect him to join the Vampire Counts faction, to buff Wight units, and to have some kind of interplay with Kemmler.

The question now is how he fits with Creative Assembly’s content plan. Speculation on the Total War subreddit is rife that Krell is the ‘Old Friend’ listed as the terminus of CA’s free DLC schedule, and ostensibly, he would fit: Krell’s first appearance was alongside Heinrich Kemmler in the 2nd edition campaign ‘Terror of the Lichemaster’ from 1986, which certainly makes him old.

However, even though he’s usually a hero in the tabletop game, Krell would almost certainly be a Legendary Lord in Total War given that he’ll need his own magic items and skill trees to do him justice. And, according to community manager Grace, the Old Friend is “just a cool, tiny little thing we thought everyone would like to see, but it’s not a faction or a Legendary Lord.”

In the thread associated with this leak, community manager Bart reiterates that point: “think Blood Knight level, kind of small addition thing, not any hero or lord stuff… bear with us but moderate those expectations.”

So it seems Krell is not our old friend and thus may or may not be free DLC. But it’s pretty likely he’s coming, either way, so that’s good news.