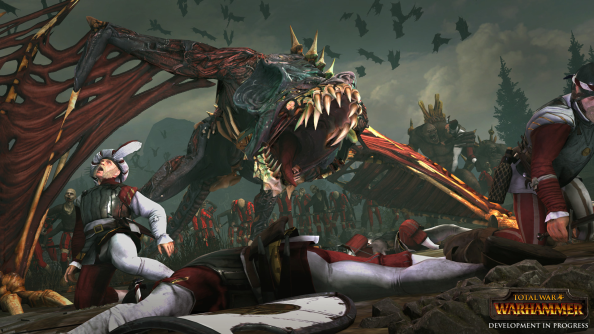 There’s only so much traditional trailers can do to convey the sense of scale and command a Total War grants you as you sweep across the battlefield, tracking the progress of your dwarfs while keeping a wary eye on encroaching goblin doomdivers. This one forgoes fixed perspective in favour of just that sort of sweeping.

With time and updates, perhaps Total War: Warhammer can stand among the best strategy games on PC.

You can claw your way around as Creative Assembly’s camera drifts through the Old World below, taking in craggy peaks and Vampire Counts. If you’re on your desktop it’s a simple matter of clicking and dragging. On a phone you won’t be able to do the same in a browser – you’ll want to use the YouTube or Facebook app and pan your view that way.

There’s also a VR option for those with Google’s cardboard wonder, again accessible through the YouTube app.

Creative Assembly’s latest is out tomorrow, at 8am BST. It represents four years of effort in transposing Warhammer Fantasy from the board to the screen, and according to our Fraser’s Total War: Warhammer review it’s largely successful – with room for improvement. Your sort of thing, do you think?