Arachnarok is the scariest thing I’ve ever seen. The towering spider is a prime example of one of Total War: Warhammer’s new giant units, and from the first time I saw him looming large during the battle’s planning stage, I knew we wouldn’t be friends.

“Are those little goblins on his back?” I asked incredulously as I saw figures scampering around on the back of the giant spider’s chitinous torso. Turns out they were tiny archers, individual units firing down from the back of the 100-foot-tall death-spider. Just to make it extra scary. 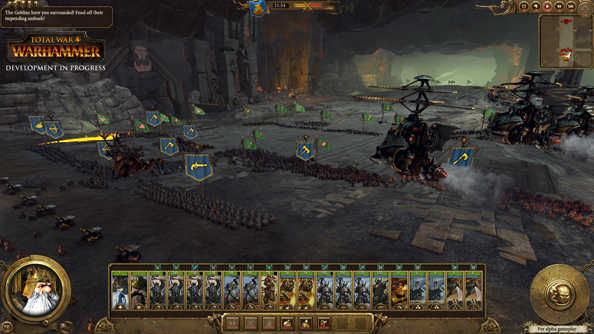 This demo – the first hands-on with the game – battle pitches the steadfast Dwarfen war machine against the Greenskin hordes, and it’s immediately clear that these aren’t just armies wearing different types of armour or a special perk as per the historical Total War games – they’re diverse races with strengths and weaknesses inspired by the Warhammer lore. While I’m only seeing two of the four races – Greenskins, Dwarfs, Empire and Vampire Lords – that will be making up the game on release, they couldn’t be more different.

I’m playing as the Dwarfs. They have high morale and tend to move slowly due to their natural height disadvantage, and have no real interest in large creatures or magic, preferring to put their faith in large artillery pieces and strong defensive infantry. The Greenskins on the other hand, made up from a mix of goblins, orcs, and other loosely affiliated creatures, ride spiders into battle and are both fast and maneuverable, but hampered with low morale which makes them easy to break as I rake them with artillery fire, sending them scampering away in a panic. 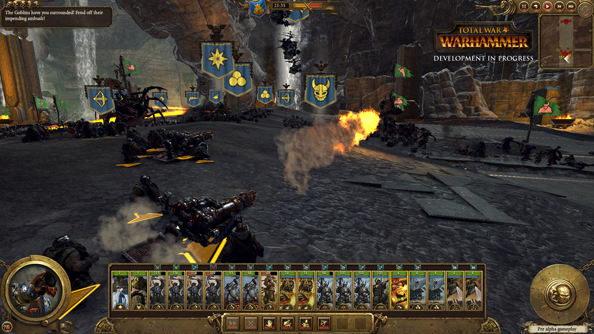 The character of these races is taken directly from the tabletop game, which many of the team have become fast fans of during the development process – what better way to internalise the rules and feeling of Warhammer than by gathering around a table and testing the systems?

We’re assembled inside one part of the claustrophobic Dwarfen Underway. Dwarfs will be able to change stance and venture into one of these “underground highways” to travel around quickly and avoid difficult terrain, but these roads were long ago abandoned by their creators and you could get ambushed by any number of enemy forces that’ve taken up refuge down in the deep. This is one such ambush.

I’m helped through the carnage by a new info panel that describes a unit’s strengths and weaknesses in addition to any traits. The rifle bearing “Thunderers” have armour piercing, meaning their rounds will go through armour, another unit bears the trait “Fast (for a Dwarf)” which is actually really quite slow. At a glance you can see which units are useless in which scenario and it was absolutely invaluable while setting up my armies for the first time. 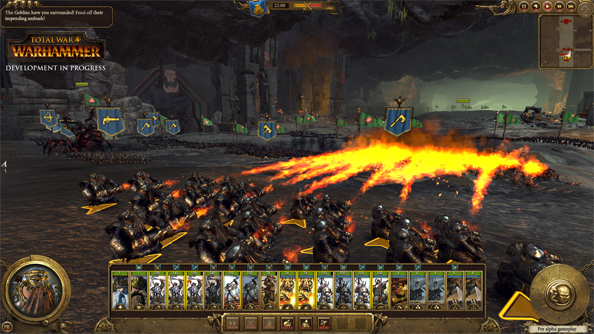 The long narrow battleground feels like a nightmarish meat-grinder and I’m quickly assailed on all sides by the menace, with enemies pouring out of hidden entryways nearby. I will my units to hold the line, repelling cavalry charges with my warriors as flame-spewing Irondrake troops dish out gouts of flame as I try to scare the goblins back.

This is one of the game’s ‘quest battles’, an attempt at bringing a more crafted narrative experience to the title, and another first for the Total War series. The team have a commitment to the sandbox at the heart of Total War and want to stress that these battles are optional, but these narrative strands will also allow you to unlock special items for your hero unit. It feels like they’ll slot into the campaign (which we’ve not yet seen) similarly to XCOM’s council missions: a heavily curated experience from the team that slots in amongst the chaos.

It’s unmistakably a Total War game, but what I wasn’t expecting was that it’s also unmistakably a Warhammer game. Additions like flying units, giants and magic have added a distinctly fantasy feel to proceedings, and zooming in amongst the combat you can see little touches like Troll’s vomiting bile over enemies mid-fight, an ability from the tabletop game that here is just part of the attack animations. Each of these troop types have been modelled from the sprues of the tabletop models with the 3D artists fitting these pieces together to see how they worked. 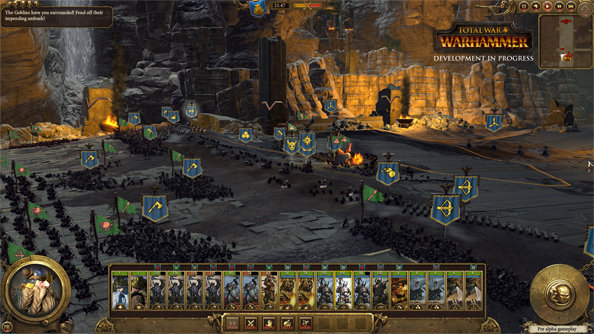 Creative Assembly have been working on the project since their 2012 deal with Games Workshop, and the game is full of tiny details that show the level of care and enthusiasm that’s gone into the project. Many members of the team describe getting involved with the deep lore of the fantasy game as similar to the research that goes into the historical entries, except with the added responsibility of being – in a lot of cases – the first people to take these armies from the rulebooks and bringing them to life. Everything from the way Arachnarok skitters over the battlefield to the way Thorgrim Grudgebearer swings his warhammer from the back of his golden throne.

Back on the subject of horrifying arachnids, I killed Arachnarok. He melted under a hail of cannon fire and an assault by a unit of Slayers, which the team describe as “tiny bearded terrors.” These unbreakable units are immune to the effects of morale and designed to fight large units. The battle won and the last shattered remnants of the Greenskin menace running off into the distance, one of the passing developers leant in: “Why not try it on hard this time?”