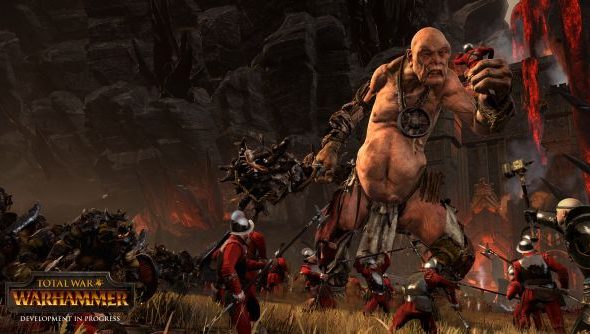 The orcs are on the march. Their boyz upfront, flanked by a warboss on a wyvern. Beside them, savage archers, trolls belching fluorescent green vomit, goblins riding spiders.

You can feel the gloom, the claustrophobia. This is Hellfire Pass: a quest battle in the new Total War: Warhammer – a must win fight between the greenskins and the mighty Empire.

The armies come together with an almighty crash; orc cavalry atop sprinting wolves colliding with the stalwart shields of the Empire’s foot-soldiers.

It is a staggering sight. Men, half-men and beasts compressed into a narrow volcanic amphitheatre. The details are hard to parse. Here is a goblin doom rider, a gleeful, suicidal runt about to crash into a brigade of heavy infantry. There is a goblin wizard, summoning the giant ethereal foot of a demon god to crush an entire unit.

With Total War: Warhammer, Creative Assembly are not fucking about. They are building the tactile, tactical grand-strategy game Warhammer fans deserve. 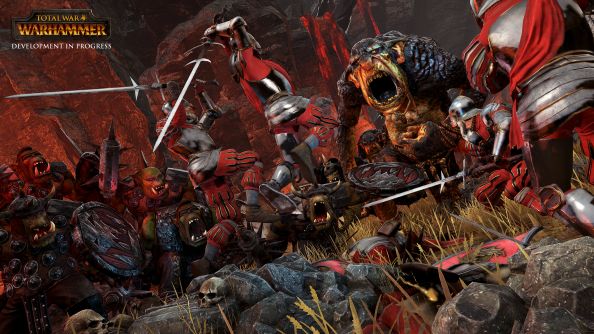 The thing about Total Warhammer: it is also a Total War game. Just one with a sense of fantastic anarchy.

Speaking to the some of the Creative Assembly team after the demo, it’s clear that they’re having more fun creating in Games Workshop’s universe than ever. They’ve always been a studio that delights in playing board-games, but the enthusiasm on display is heart-warming. Desks and offices are covered in Warhammer and Games Workshop memorabilia (Games Workshop provided two of every model they produce to the studio at the start of the project), and tables and meeting rooms are set up with games in progress. And in many ways, much of the research phase of development has already been done: unlike their historic games, they mostly know what units and characters will feature in their armies. “All” that needs to be done is to piece the game together.

CA are showing off two sides today: the Empire and Orcs. In the campaign, they’ll be split into different factions. Orc politics are particularly interesting; if you’re going to succeed in the campaign, you’ll need to unite the clans under a single Warboss. That’s measured as Waaaaaaagh, built up by looting and pillaging, attracting orks and goblins from across the map. “If you’re too static,” laughs Ian Roxburgh, Project Lead on the game, “you have animosity problems. Your orcs just start tearing themselves apart.” 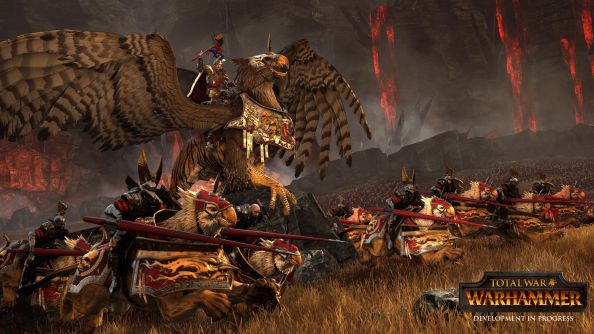 On the Empire side you play as Karl Franz at the dawn of his empire. Uniting his rivals means playing at diplomacy, politics, and maybe a little bit of subjugation.

Most of Warhammer’s most fundamental concepts have been preserved. Magic is in, but used sparingly. Your spellcasting budget is determined by the “winds of magic”. “We are really trying to make sure that you don’t spam these spells out,” says Ian. “They are really powerful; they can be game changing when used at the right point.” The power of the winds of magic changes according to the area, and will grow as battles progress. “You might have to wait a long time before you cast a spell.”

You’ll work harder to improve your leaders, too. “Every named character in the game gets their own quests,” explains Andy Hall, the game’s lead writer. “They open as you unlock their skill tree, with missions that must be completed.” You’ll be asked to recruit certain units, or explore and occupy certain lands. Eventually, they’ll lead to a final ‘boss’, although the term is used very loosely, battle. Those battles will be more scripted: they’ll hide units in forests, spread unique units across the battlefields, and will come with specific victory conditions. 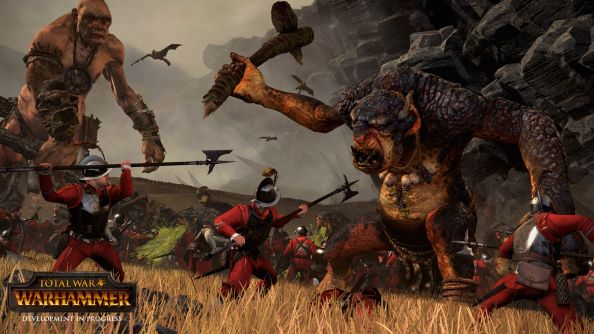 The mechanics of Total War’s battles remain similar, but have required a new approach to technology. In the historical Total War games, units are generally human or horse shape: they’re built in a particular way in which your PC creates variety by combining pre-set collections of heads, helmets, arms and legs. In Warhammer, CA are taking a different approach. “Each model is handcrafted, from start to finish,” says Mark Sutherns, Total War: Warhammer’s dev manager. “Each model is more detailed. And we still have the variations in heads and arms.” There is a side-benefit: this new approach means units can be considerably larger: you can fit more orcs and humans in a unit, and more units on the field, without requiring a beefier PC.

The second change: giants, alongside flying units and spider shaped cavalry have forced a change in how animation works in Total War. And it’s a change for the better.

When two soldiers fight in a Total War battle, both characters interact within a two sided animation. Creative Assembly refer to it as ‘matched combat’. “Matched combat is a single animation with two entities,” says Simon Mann, the game’s battle designer. If a halberdier is fighting a swordsman, Creative Assembly’s animators create an animation specifically for that scenario, and lock two units into it. The Warhammer game is moving towards synced combat, in which one units animation is triggered by the effects of another. So: a giant’s club strike is able to hit multiple soldiers within a unit, and they all react separately. “The biggest effect is in the charges. I think they are much more satisfying. The units now animate all the way until the end of the charge. Whereas previously they get a bit more static as they leap in, now they’ll immediately block or attack. It’s a much more snappy system, you get a lot more action.” 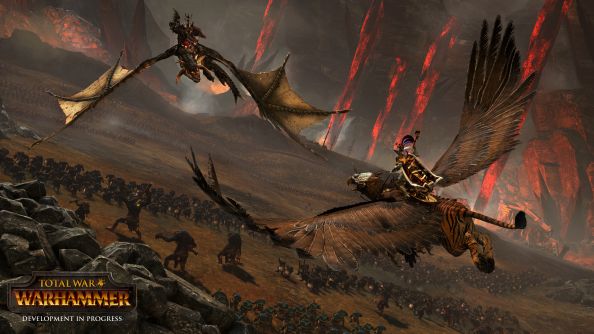 Matched animations still exist, but they’re preserved for major moments or kills. “When Karl Franz throws up a guy and he plummets down: that’s a specifically created animation.” Simon is clearly proud of what the team has built. “It makes the combat feel more dynamic, there’s movement, and the units feel like they’re responding better to your commands.

I mean it when I say Creative Assembly aren’t fucking about. There’s a reverence to the Warhammer world in their game that feels unusual. They are not making a game that is a slavish replica of the system: but something that works both as a PC game, and a recreation of Warhammer’s world. There is a sweetness about Games Workshop’s and Creative Assembly’s relationship. Al beams as he explains what happened when the team released the announcement trailer last year.

“All of Games Workshop came to a stop. You have to understand: it’s the first time they’d seen the Warhammer game alive like that.”

“Have they seen the game moving properly yet?”