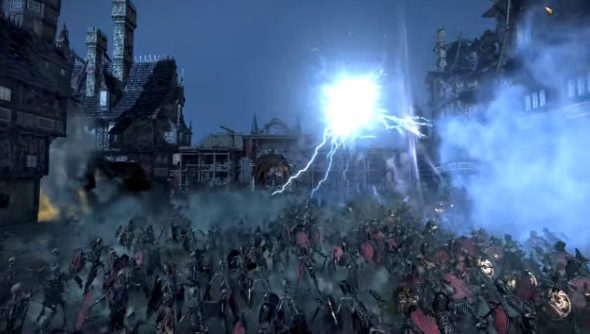 War, huh? Yeah. What is it good for? Well, games, for one thing. Without war we wouldn’t have any Total War games, just as we wouldn’t have any Warhammer. We certainly wouldn’t have Total War: Warhammer, which combines the two for a full-on war overload. This new trailer for the upcoming game highlights how war has changed – a common misconception is that it never does – and that’s most immediately evident in all the flashy magic whizzing around the battlefield.

Get more war in our list of PC’s best strategy games.

So, what can you do with magic? Well, one-two combos where you pin an enemy squad with one spell and mop them up with a whirling vortex of death with another – that’s an option. Just cross your fingers and hope a wayward spell doesn’t backfire.

Do you want to perform lots of little tactical spells, or do you want to save your energy up and batter the enemy at the most opportune moment? Why not funnel them into a tight space and throw a vortex in?

While you might have tried to sneak a unit around the back of the enemy to flank for a pincer attack in previous Total War games, here you can just as easily cast ‘raise dead’ and march a skeletal army at an enemy’s rear, sending their formation into panicked disarray.

The topography of the battlefield comes into play with spells, too, with some ricocheting off walls and others used as traps. Where and when you deploy them will be key to victory.

Additionally, to keep things fresh, each faction will have its own magical ability, with the dwarves, for example, having a fear of the dark arts and instead harnessing the power of runesmiths.

See the raw power of Warhammer’s magic in the new Total War trailer below: