Finally, that big empty patch of forest in southeast Bretonnia is about to get a whole lot meaner as its residents move in. The Wood Elves, Warhammer’s capricious, tree-hugging guerilla fighters, are coming to Total War: Warhammer with Creative Assembly’s latest DLC, and we got the chance to try them out. The way they fight and their reasons for doing so make them one of the most distinctive armies since the Vampire Counts. Read on to find out why.

Want to know what’s next for Total War? Here’s everything we know about the future of the franchise. 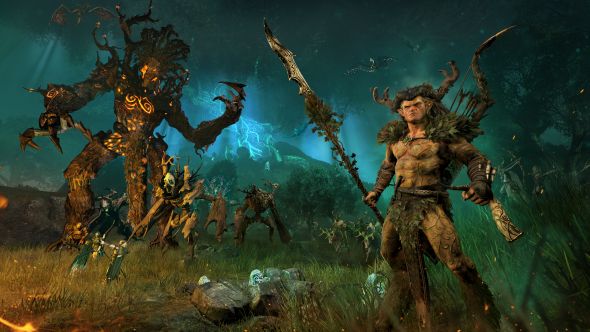 These are the Wood Elves’ Legendary Lords: Orion, the King in the Wood, and Durthu, a very old treeman (think of the Ents from Lord of the Rings, but much more angry). Orion was a standout performer in my battles against the hated Beastmen, scoring 105 kills in my second game. He’s stronger than most Legendary Lords, capable in melee yet able to snipe characters or rake units with a ranged spear-throw. He also has two powerful abilities that function similarly to bound spells, but work on a cooldown rather than magic points. He and Durthu represent the two species which call Loren their home: the elves and the tree spirits.

The elves offer many varieties of archer, with abilities no others can match. Some can shoot in 360 degrees, some can shoot while moving, and some can do both. Lead designer Rich Aldridge says it was a huge challenge to nail the animations for elves shooting backward over their shoulders while running, “but it was something we really wanted to do because we knew it would elevate the Wood Elves to become different from everybody else.”

Wood Elf archers are also more agile than everybody else, being faster on foot and able to ride a number of different mounts: Glade Riders are some of the game’s best ranged cavalry, while Hawk Riders are its first flying archers. Many Wood Elf units can also start battles outside your usual deployment zone, thanks to the Vanguard ability, and most can hide in forests, making ambushes easy to set up. Variable arrowheads also offer you a choice between magical, poisoned or flaming attacks.

All this archery demands situational awareness and micromanagement. You’ll need to monitor threats across the battlefield – especially cavalry – to keep your fragile archers out of trouble (skirmish mode helps), and re-task them often to ensure they’re firing at the right things.

It’s not all shooting, however: the Wild Riders are your stag-riding shock cavalry, boasting a brutal charge but very little armour. Even more so than other knights, you’ll need to micro like crazy – again – to pull them out of combats and charge them back in. I ask Aldridge about the systems that govern a unit’s ability to do this, and he says it’s possible to make units more or less “sticky” when it comes to disengaging. It sounds like Wild Riders will be more on the “slippery” side.

This is good, as Wild Riders epitomise the major weakness of the Wood Elves: lack of staying power. Elves are fragile, and though some can dish it out in combat, very few can take it back. For that, you’ll need to turn to their allies, because solid wood is harder than soft elf flesh.

Living trees, forest dragons and the Lore of Life 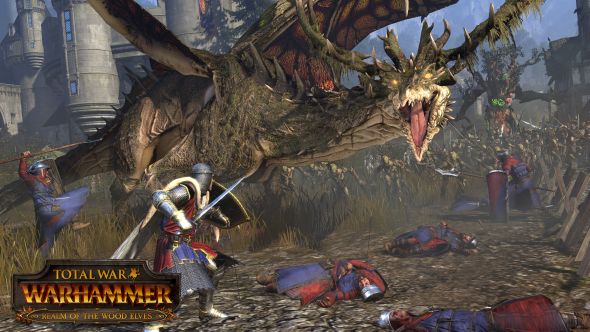 Durthu’s people, the tree spirits, comprise Dryads (infantry), Treekin (monstrous infantry, like ogres or trolls), and Treemen (huge living trees, comparable to Giants or the Beastmen’s Cygors). CA has done a great job once again in capturing the look and feel of the Wood Elves, but I think the tree spirits may be my favourites: they give rich groans and creaks as they move, like the timbers of old ships.

Among the more exotic units filling out the roster are Wardancers, Great Eagles and the mighty Forest Dragon, which floats in the air with lazy confidence, moss dripping from its stag-like antlers. Finally, the Sisters of the Thorn are the game’s first magical cavalry – a mounted coven of mages who cast spells as a unit.

Speaking of mages, the Wood Elves will get access to the existing lores of Shadows and Beasts, as well as the new Lore of Life, which will be added with their DLC. In the tabletop game, the Empire and Bretonnia can also use the Lore of Life, so there’s a chance their spellcasters will get it too.

As for the elven elite, Waystalkers, Spellsingers and Dryad Branchwraiths are their heroes. Waystalkers are deadly archers who don’t reveal themselves if shooting while hidden. The other heroes can cast magic, with Spellsingers able to choose from more lores, whereas Branchwraiths can also handle themselves in melee. Your generic lords are the elven Glade Lord – a warrior who can be male or female – and the Ancient Treeman, who is both a spellcaster and a fearsome opponent in combat.

Amber, the campaign map, and why a Wood Elf cares 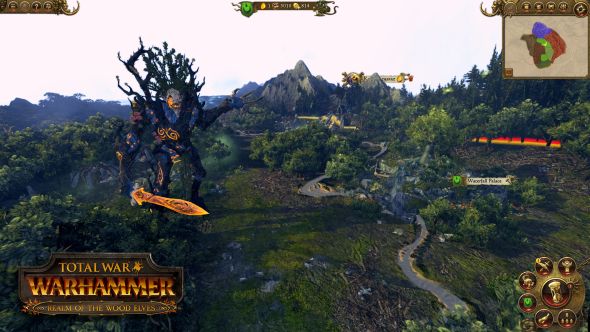 The Wood Elves use gold as their main currency, like many other races, but they also have a unique secondary resource: Amber. You’ll need Amber to recruit units from the other side of the forest – so tree spirits for Orion, or high-tier elves for Durthu – and to research some technologies. Amber’s main purpose, however, is to grow the Oak of Ages.

The Oak of Ages is the heart of Athel Loren, both physically and metaphysically. It is a mighty magical tree whose roots stretch all over the world, and upgrading it with Amber is the Wood Elves’ key victory condition in both the mini and main campaigns. As you do so, you’ll see it grow on the map, and it’ll confer various global buffs to your race, particularly when it comes to staving off Chaos Corruption. Since it’s your victory condition, your enemies don’t want to see it flourish, and you’ll need to defend it against attackers.

Naturally, you’re now wondering how to acquire Amber, and this is how Creative Assembly have answered the tricky question of why an isolationist race such as the Wood Elves would go a-conquering, or bother talking to other people. You’ll get one Amber for each region you capture, or for each region owned by your military allies.

But just because this incentive to venture into the world exists, don’t imagine that the Wood Elves really care about anything beyond Athel Loren. All real construction happens there: Loren’s regions have ten development slots each – even capital regions for other factions only have six – while regions outside the forest will only have one ‘exploitation’ slot, if you’re a Wood Elf.

You can exploit conquered territory in one of three ways: recruitment, replenishment, or resources. The first option enables local recruitment of units available in Loren; the second speeds replenishment rates for local armies; and the third adds any available local resources to your tradeable goods in the diplomacy screen. We assume conquered regions are still useful for gold income, but otherwise, Wood Elves fight only for Amber. They can, however, fight anywhere: Wood Elves are the only race who can occupy any settlement. Both Dwarfholds and human towns alike are options for conquest.

It’s just as well, because Amber is precious, and upgrading the Oak of Ages is expensive: it has five tiers in the main campaign and four in the mini, with the fourth level in the mini costing a whopping 30 Amber. So you’ll need to choose between investing Amber in the Oak, in your military, or in technology. “We had to make sure that gameplay-wise it was interesting,” says Aldridge. “So there’s a choice there.” 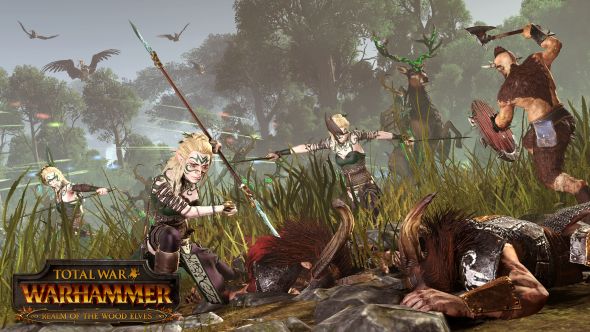 Creative Assembly have found some creative solutions in transferring the Wood Elves to the context of Total War, when I’d always thought they’d be one of the trickier races to do this with. Harvesting Amber from the world, but with the ultimate goal of empowering the Oak of Ages, is a deftly characterful incentive to get Wood Elf armies on the march; unique tricks like cloaked shooting or 360-fire reflect their skill at archery; and partitioning their tech tree reflects the tension between the elves and the restless forest which harbours them, often begrudgingly.

The fidelity of CA to the source material should continue to impress Warhammer fans, while Total War veterans will hopefully appreciate what another distinctive race brings to the mix. Many were sceptical about a Total War faction with no shooting – the base game’s Vampire Counts – yet CA tell us fans have grown to appreciate the diversity that such asymmetries bring to the gameplay. In this sense, the Wood Elves will make a rich addition to the formula; they are challenging to play with all that micromanagement (I worry they won’t scale well to larger battles), but they are unique, and full of character.