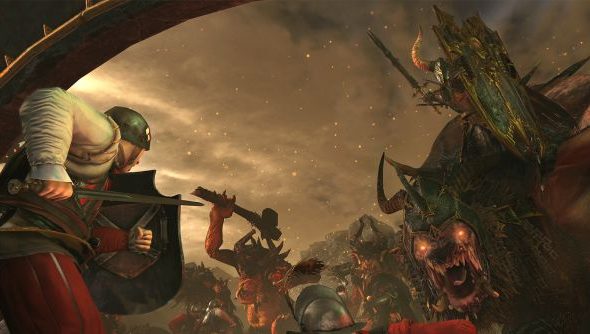 As we move ever onwards to the release of Total War: Warhammer (May 24, if you’ve lost track) it’s time for another campaign gameplay video. This time it’s focused on pre/early-order bonus faction the Chaos Warriors, who aren’t particularly interested in the concept of building towns or creating infrastructure – they’re about murder, death, sacrifice, all those lovely things.

Wait too long? Here’s the best strategy games to tide you over.

The video’s on the shorter side at eight minutes, but includes a rundown on Chaos tech, army movement, infiltration, assassination and pillaging. They’re those sort of folks, y’know?

They don’t seem quite as fully-featured as some of their counterparts, what with the war-focus, but I suppose if you want to be a marauder they’re exactly what you’re looking for.

This marks the third campaign walkthrough on YouTube for Total War: Warhammer, though the Greenskins got their own focus on Twitch during the mod announcement livestream. This leaves just the Empire to get their moment in the sun, boring old humans as they are. Of course, we’ve seen stuff from them before in initial reveals, but CA will want to round out the set.

We’ll have a full review of the game with you before release, as Fraser goes about his conquering of the world. He’s expert at that. While you wait, here’s everything we know about it.