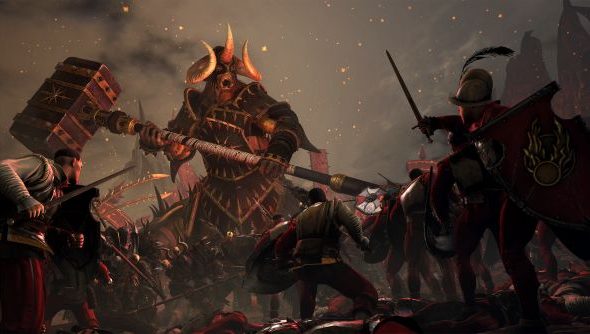 It’s been a common joke since the game’s announcement: why, of all the possibilities, did Creative Assembly and Games Workshop go with that most awkward of titles in Total War: Warhammer? Why not combine the two into a glorious whole? Well now we have our answer, straight from Rob Bartholomew, brand director and Man Who Controls These Things. Perhaps predictably, it’s all down to recognition.

The best strategy games generally roll off the tongue a little better.

“If people call it Total Warhammer, that’s fine” clarifies Bartholomew, “We’re not going to phone the police or anything. But it’s supposed to be a fantastic partnership between Creative Assembly and Games Workshop to put these two games from different ends of the spectrum together. With that comes a lot of brands and franchises and legal and IP and words like that.”

“But it’s still a Total War game, and it’s still Warhammer, and we wanted to represent those. We sat around and said ‘can we call it Total Warhammer?’ and thought ‘well, then it’s not Total War, it’s not ours, and it’s not [just] Warhammer so it’s not Games Workshop’s.’ It’s not ideal, but we’re kinda getting used to it.”

A definitive, if businessy, answer on why not the most obvious other option, but we’ve got some more suggestions. Why not split the wars up and go with Warhammer: Total War? The series name has danced between suffix and prefix before, it’s hardly new ground. Phil indicated that he would have gone whole hog and simply called it “Warhammer: Total Warhammer” which, while missing some key branding opportunities, definitely gets the point across.

All this and more via Eurogamer’s video on the subject, which you can see below.