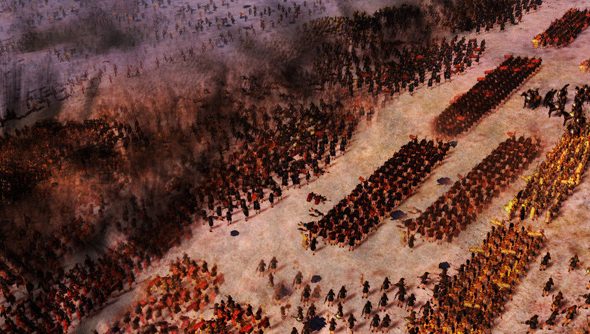 Total War: Rome II is getting better – and not even ‘buy in the Steam Christmas Sale’ better. If the patch notes of the recent flurry of weekly updates are anything to go by, it’s already significantly closer to being the game players had hoped it would be.

Tomorrow’s patch will bring new, free DLC to the game and Creative Assembly’s “next major step towards mod support”. Beyond that, the Total War series will enjoy a path of post-release betterment it never has before, which is great when you read our Total War: Rome 2 review.

Creative director Mike Simpson says that comprehensive feedback from fans on Rome II’s official forum have enabled his studio to tackle post-release issues in a fraction of the time they have on previous projects. So much so that, in the next few weeks, Creative Assembly will be able to move away from pressing stability and configuration problems and onto improving the game’s feature set.

“I expect the pace of patching to slow a little as gameplay and deeper AI changes need longer to test and tune,” he said in a forum update. “It’ll still be weeks rather than months between patches though, and we’re going to continue to patch the game regularly for the foreseeable future.”

AI fixes are among the toughest to test, as changes can take a 200+ turns to rise to the surfacce. As such, though patch 5 will go live tomorrow, CA have already begun work on patch 7.

“This does mean it takes a while for your feedback to manifest as changes in the game, so please don’t be too disappointed if your top issue isn’t fixed in the latest patch,” explained Simpson. “We are listening to you, and we will get there.”

CA plan to be in a position where they’re happy with how the game plays “as fast as possible”. After that, they’ll shift gears into long-term support – an entirely new concept for the studio.

“Our games already have a long lifetime, but by releasing occasional DLC packs and free content updates we keep working on them for much longer,” said Simpson. “This means upgrades in a number of areas which help the game evolve, and stop it becoming obsolete.”

Wahoo! There’s nothing that makes us feel alive like the staving off of obsolescence. What would you like to see appear in the next patch? Or indeed, patch 7? For more on why you should care, see the more upbeat parts of Fraser’s Total War: Rome II review.