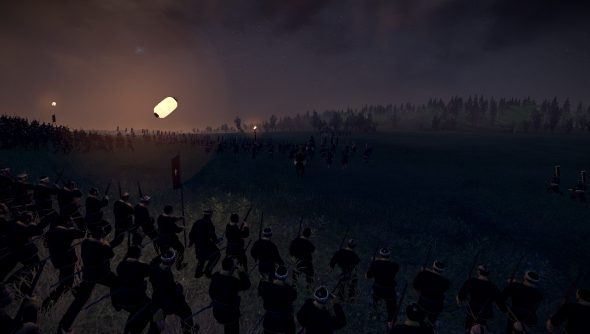 It’s striking, looking at Metacritic’s bank of Total War scores, how consistent the team is. Creative Assembly’s boardgaming baby rarely pushes past 92%, except in the hands of fanboys, but rarely drops below 80 either. The company seems to have found a sweet spot, where reviewers find enough to keep them happy in each new iteration – without overegging the formula so much that the next games is a disappointment. So how does the Creative Assembly do it?

Tim Heaton, studio director of Creative Assembly, spoke recently to Gamasutra about their methods. Here are histips for getting that elusive90%+ score every time.

Even though the Creative Assembly was bought by Sega back in 2005, they’ve kept control of their development plans and even their marketing. They employ a team of specialists who work from the studio. However, Heaton said that Creative likes working with Sega; “; they’re a good dad to have, because they provide support where we need it. They tend to be watching the market for us, to steer us into the right direction that they think we should be going. “

Even at the earliest point of design, the team is already cutting features, just to make the game possible. As they get deeper into prototyping, they get rid of elements that take large resource commitments, “rather than delivering an 80 percent quality feature”. Finally, throughout production, they do a Metacritic analysis.“We will break those features down into subsets, and we both look at it from a player’s point of view, and a reviewer’s point of view, and we’ll weigh certain features as to how we see players and reviewers look at them, and they’ll build up to a 100 percent score, and then we’ll judge where we feel we are on those individual feature sets, and see the momentum on those too.And so if we see one flat line… we then will cut it… really late in the day. I think teams are really scared about doing 90 percent of the work and then cutting it… And we’re fairly brutal on that.”

With two projects being developed by different teams in CA, Heaton has seen how distracting it can be for each team. “A medium-sized studio like us, I think you’ve actually got to build a wall between them… you’ve not got to allow yourself to be distracted by the problems of one team pulling away from another. And I think that’s an issue that CA has had in the past with Total War and Viking — Viking was the last console game that CA produced, and that was a flawed game. To some degree it was flawed because we were also trying to make Empire: Total War at the same time. So yeah, I actually think with a small studio, it’s useful to have dialogue between the two teams, and not useful to share resources.”

Heaton thinks great games come from great teams – and that means great individuals. “I saw it at Crytek, too — that they strive for quality at every single point along the way.” he says “And when the core staff on a team take that as the number one priority, then it feeds through really great.”

By starting with a bigger feature set than they need, they chop away until they believe what they’ve got is doable. “ We do work to a date,” says Heaton “and we absolutely want to work to a date. We almost have to be constrained; if we weren’t constrained, we’d never finish a game. We like the constraints, and we like making money…”

Not for the players, but for the mainstream reviewers who might only play that much. “The perception of the first five or 10 minutes of the game is super important for some reviewers” says Heaton, “not hardcore reviewers, but more mainstream reviewers. Whereas our average play time on Total War is 40 hours; 50 percent of our players play for 40 hours, and 25 percent of our players play for 100 hours or more.”

7. Track what your users do.

How many people finish a campaign? How many quit out during multiplayer battles? Creative track it all, using Steam analytics, which let them watch their users’ buying and playing habits, and also their own system. “We have an in-game metrics system, which has collected one and a half terabytes of data so far from Shogun 2.” says Heaton. “And so we absolutely can see how people play to a huge, deep level, and that is feeding back into the design of our next game hugely… Metrics is the future.”